Is Thomas Anagnostou still around here?

Trying to track him down about a bug in his Project Timer app, hoping to touch base with him. 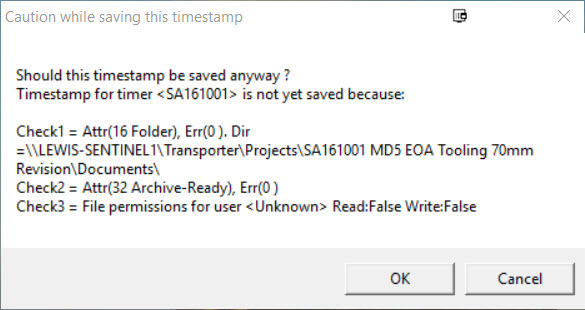 I think he escaped the labyrinth…

You are looking for @ThomasAn . His last post was 4 months ago so he seems to still be active here.

The last line of that message says that Windows is not giving the program permissions to read or write in that folder.

Yeah, and I don’t know why, because it is writing the file, and I do have permission to write to that folder. I don’t know if it is because it is a network path or a windows 10 issue. I would be willing to troubleshoot the problem, if you don’t mind releasing the source code.

Good to see you still around. Not to change the subject, but I recently had a long running Timer crash for some reason and when I re-opened it all data was wiped out. I opened the .ini file and it too was empty after the4 crash. Is there any other place a backup might get saved? I usually open the ProjectTimer.ini file and copy the week or month range of data and import that into Google Docs or Excel to work up a billing invoice and just let the timer runs for the duration of the project, about three years in this case! I know I should be letting the Timer write timestamps but when I have lots of categories that gets pretty involved. Great tool and this is the only time I’ve had any data loss with it. Not even sure why it crashed in the first place. The lesson I’ve learned it to maybe not let it run forever and clear out at each months invoicing. Any hints of help you might have would be greatly appreciated.

Sorry guys. This app was written in 2007 on a Windows XP on Visual Basic (I am surprised it still runs today). I don’t have access to the code for any changes (VB is not installed on my system any longer).

Somehow it still runs on Windows10 (if you keep it local and give it’s folder full permissions for “Users”). Usually most problems people have are Windows permission issues (make sure “Users” gets full access for the “Rayflectar Project Timers” folder). Other than that, I am not sure how it would behave over networks and such (it wasn’t tested like that).

Thanks for using the app, but sorry that I can’t be of much more help here.