Hello All,
A new version of Iris has been released. Along with this release, documentation has been updated, including the API documentation, Tutorials (need to complete some on the page), and a Changelog. If you have any requests for tutorials, please let me know. Use this thread to comment on any issues with this latest release.

The most important change in this update is the Shadow behavior. Now it is as follows:

I don’t seem to be getting past the 99% level in object processing - RH6 WIP.

Thanks, I’ll check it out. Out of curiosity, have you been able to try it in Rhino 5? Same behavior?

I checked now on RH5 with the same model - that works without problems.

Hello @wim. I’m trying with several kinds of files and am not coming up with anything specific that would point to not being able to save. A few questions:

Something else: when Saving As (instead of exporting selected objects) from my default template, I get a lot (an awful lot) of hits saying that hatches, details, and clipping planes are not supported. Could these just be mentioned once instead of for each and every instance in the file?

Something else: when Saving As (instead of exporting selected objects)
from my default template, I get a lot (an awful lot) of hits saying that
hatches, details, and clipping planes are not supported. Could these
just be mentioned once instead of for each and every instance in the
file?

Does it make any difference if Iris is in this directory:
C:\Users\<yourusername>\AppData\Roaming\McNeel\Rhinoceros\6.0\Plug-ins ?
I can imagine you just placed the plugin in the most convinient location for you (which should be just fine) but I’m trying to see if it has to do with where the plugin is in relation to where it wants to save to.

Something changed in the recent WIP that is affecting saving, but I can’t seem to get more specific than that unfortunately.

This is happening will all models in WIP?

Moved the Iris plugin - SystemInfo below.
I have tried with a few models but all of them are showing the same behavior.
I suppose you could post a file here that I could try just to make sure.
w

WIPSPHERES.3dm (153.8 KB)
Here are some spheres from a block…exports ok from here.
(seriously appreciate your time!) 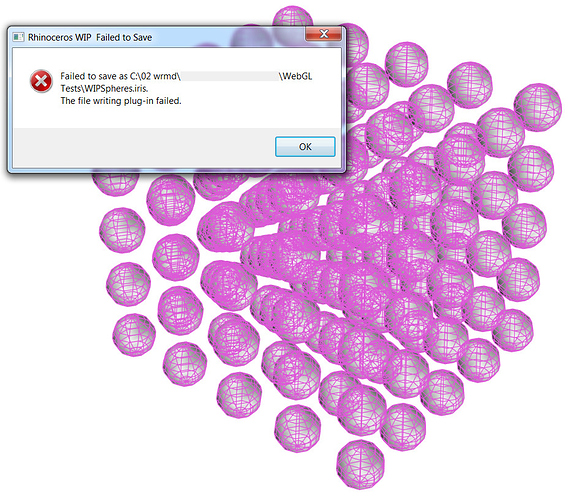 I think the strangest thing is that popup… That should not be there. This info should just come on the command line. This tells me that it is not any of the errors I’m trying to catch in Iris, and is an error on the level of the plugins class…

Is it possible to export in Shaded mode and not Rendered mode?

For the future, it would be great to have a way to add some sort of notes popup icon so that I can add comments on certain areas of the model.

There should be no constraint on which view mode you are in when exporting. Is this written somewhere, or are you experiencing this?

I’ll add the notes pop up to the task list. How would you imagine adding this in Rhino? For example, using a dot?

I am in Perspective, Shaded mode when I use the export option (also tried Save As) and in both cases the resulting file is a Rendered view. I realize that is probably what most people prefer but it would be nice to have the option to export in simple shaded mode which for me is sufficient.

It would be great to be able to add the popup notes via a browser interface. Sort of like the way you can add comments to a PDF document. Not sure if that is a realistic expectation.

At the moment, there are no alternative shading modes in the iris web app. I’d love to add some in the future.

As for the notes, you should think of Rhino as the editor for the web scene, so we should conceive of a way to add this data in Rhino so that it gets exported. I think dots could be a way to add these notes to the model, but there could be other ways…