InterpCrvOnSrf: Only curves created using the option Closed=Yes remain closed when editied. Curves which automatically closed when created because the cursor was moved close to the start of the curve become open when edited if the interpolation point at the seam in the curve is moved. All closed curves created by InterpCrvOnSrf should remain closed. (InteprCrvOnSrf in V6 behaves the same.)

Does your curve cross the seam of a closed surface? I’m not seeing this.

@GregArden No, untrimmed open surface. I just tried a curve on a single span degree 1 surface and the behavior as reported above occured.

Start InterpCrvOnSrf
Select the surface
Create curve on surface. Do not select the Close option to close the curve. For the last point move the cursor close to the first point until the curve snaps closed. The shape will change so that there is curvature continuity.
Complete the command.

What for curve will show it as a closed curve. CurvatureGraph will show continous curvature.

Start InterpCrvOnSrf and select the edit option
The curve should be highlighted…(If message says no curves with history then History was not on when curve was created. Go back and create a new curve with history on.)
Select the highlighted curve which was previously created.
Click on “edit” point at start/end of curve and drag the point. The curve breaks open.

If the process above is repeated but using the Close option in InterpCrvOnSrf then the curve stays closed while being edited.

Open the file.
Start InterpCrvOnSrf and select the Edit option.
Both curves should be highlighted.
Select the blue curve.
Drag the edit point at the start/end of the curve.
The curve opens.

Repeat above but select the green curve and drag the edit point at the start/end of the curve.
The curve remains closed. 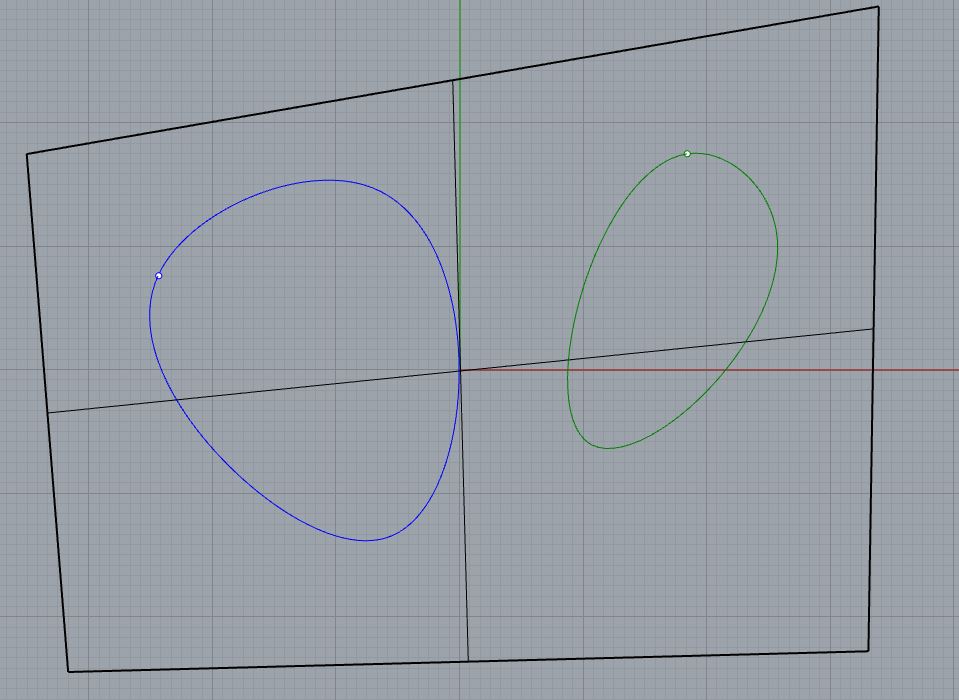 Got it thanks. I was looking at control point editing instead of editing in the InterpCrvOnSrf command. RH-60894 Edit Closed InterCrvOnSrf curves as closed.