I’m trying to hide the axis plane indicator by setting e.g. TranslateXYEnabled to false. I was able to hide most of the gumball like this but it doesn’t work for these indicators. Is there a different setting or maybe a bug?

This only works on a custom gumball handler that you are working on. It does not effect Rhino’s built-in gumball.

you could set the plane size to zero to hide all 3 planes in Rhino’s gumball eg:

I have a custom gumball handler so that’s fine. And I can influence the appearance up to the point where I want to hide these indicators. I expected them to hide as soon as I disable the XY, YZ, ZX translation but they are still visible.

I also tried to use the PlanarTranslationGripSize which works fine so far and hides the indicators but now they are hidden all the time, even for the standard gumball. I wouldn’t expect that behavior when changing just the appearance of a custom gumball.

For me, both solutions would be fine but none of them is working and I would consider both cases a bug.

Any further ideas on this?

my example above is about to work for Rhino’s gumball not a custom based one. I’ve used custom gumballs over here too (in a conduit) and it seems to be possible to hide the planes without affecting the build in gumball.

I also tried to use the PlanarTranslationGripSize which works fine so far and hides the indicators but now they are hidden all the time, even for the standard gumball. I wouldn’t expect that behavior when changing just the appearance of a custom gumball.

I’d suggest to post an example snippet so @dale can repeat and probably fix this.

I created this sample code which reproduces my issue for me very easily. It still shows the indicator and I want to get rid of that and just show the axes.

i was able to repeat what you see. If i have set my Plane size for Rhino’s build in gumball to 20 like below: 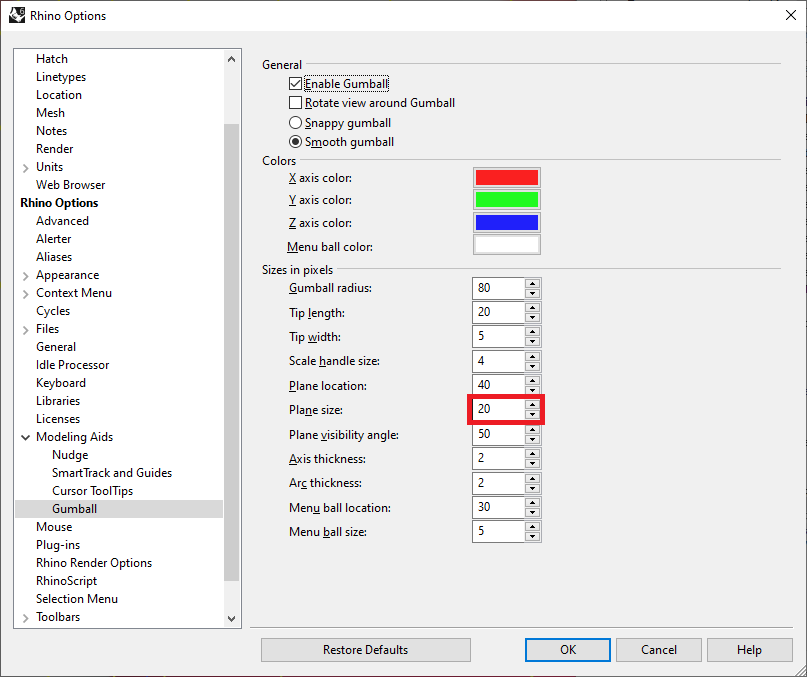 The only way to circumvent that was to reset the PlanarTranslationGripSize value back to 20 when i dispose my conduit (when my command ends).

I even get this behaviour if i sublass GumballAppearanceSettings which is strange. It happens in Rhino 6 and 7.

thank you for reproducing the issue! I’m facing the same behavior that the plane size seems to be set on a global level although it’s just a local instance of GumballAppearanceSettings. I don’t get this behavior and I also assumed that disabling the translations as I did in my code would hide the indicators (as it did for all the other indicators for translation and rotation).

I don’t see a workaround here because I also don’t want to hide the indicators for regular gumballs while my custom gumball is shown.

Does setting GumballAppearanceSettings.PlanarTranslationGripSize to 0 help?

I tried this and it works but it hides this for all gumballs, including the ones from Rhino when transforming an object.