I am new in this community and this is my first post.

So let me introduce myself.

I am AntF and use Rhino since almost 5 weeks now.

After getting troubles with Rhino NURBS while designing the model of a Fin for my internship and reading and watching a lot of tutorials, i come here to ask your support because I’m really out of ideas how to fix my problem.

So here is my big problem: I can not create the hole fin in Nurbs without splitting the tip and creating another surface, which is not really smooth… Infact the tip-end is not curvature continuos with the hole surface of the fin.

I have now problems because, again, I am out of ideas about how to construct the hole thing.

But as I told you, I really don not know hot to continue… It is really strange that an object with a soo easy surface like a fin is so difficult to construct in CAD

Can please someone help me with this project? It really important to me

i also would attach the fin file but I dont’t find the option here…?

i also would attach the fin file but I dont’t find the option here…?

Use the upload button:

Thanks, didn’t see it

Fins and wings are not easy around the tips. Keep in mind the manufacturability of the fin. A few things I notice in your model.

Also check out some of the other forum topics hear…
https://discourse.mcneel.com/search?q=wing%20tip

Hi AntF- I think I’d go about this a little differently - I’d make the tapered edges separately from the flatter surface, so that you can control the shape better as it wraps around - see the attached file of a similar shape.

off topic a little but have you seen this program to model surfboard fins?

he also has some fin bases in his Github repositories: 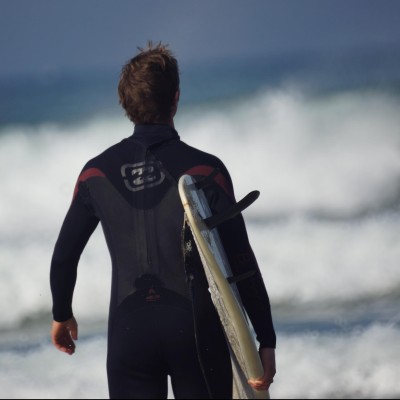 finbases - OpenSCAD models for different types of fin bases, to be combined with finFoil 3D exports.

Thanks for the advices. Everyone of you.

Ncik, some ideas how I can manage to end not in 1 point? Because I’m constructing the fin with a sweep 2 rail.
i already tried by ending in the littlest line (2 points also) but then I loose the exact design I wanna reach… I also tried to scale the foil and put that on the tip end end sweep in that way. Have then the problem that I cannot close the tip end then…
Any idea or advice for that?

Thanks everybody for the interest and the compliments

Keep in mind the manufacturability of the fin.

A 0.5-1mm max thickness scaled airfoil section will be indistinguishable from a 0.5-1mm thick rectangle with rounded leading edge in the final product, both in terms of shape and hydrodynamics. However, the rectangular end is infinitely more manufacturable than the scaled airfoil that will taper to fractions of a millimetre. A lot of time can be wasted fiddling around with a wobbled of 0.1mm that is clearly visible in the Rhino but totally imperceptible in the final product (trust me, I’ve been down that road). Make the trailing edge square with some thickness and do the same with the tip and the rest should work out.

Hi everyone,
sorry for the late answer, it was a long festivity week end here…
so I constructed the fin as you told me. With a straight trailing edge…
I did again a sweep 2 rails but let end the lines this time in a scaled foil of 0.02 mm. (green, see screenshot)
But again, the tip and actually all the fin is not smooth… maybe I 'm just loosing a detail… don’t know…
do you have suggests?
Attached you will find the screen shot and the file.

HI Pascal. The thing is that the surface changes a lot in the mid of the fin too.
I already tried your method and got a nice edge but not a nice surface (it ended up to be flat) which is a kind of a problem

I also tried to construct the fin in another way, but I don’t get the same good result as with the rail.

Seriously, I have no idea how to fix it. Even with the rectangular trailing edge…
Can you please give me an example how to construct the hole fin please?

Well, it is certainly up to you - I think a layout similar to the one in my example file will be much cleaner and more consistent than one using a singularity to close up the tip. If the main surface is too flat, make it more curved…

(Btw, to fix that tip, select all the surface points on the open end and SetPt them in XYZ to the end of the line that is right there. Select the next row of points from the tip and SetPt them to the same location but only in Y
Fin propose_tip.3dm (79.3 KB)).

Far from perfect, but might give you some ideas. All the curves I used are in the used layer. Single side of the surface was created with a Sweep2. The input curves need some tidying up, which I haven’t done.