Creating the correct profile for a wingtip

I take it that I should reduce the number of nodes in the initial curve and then only do the extrusion.What is the best way to get the lowest number of points and still keep the correct shape?

If the original imported curve was a polyline with straight sections then use FitCrv which will fit a curve to the polyline vertices.

Use the curvature comb to check smoothness of the rebuilt curve, and CrvDeviation to check the difference between the original and rebuilt curves.

I’m with Strato about the excessive number of control points. Where was that foil section derived and in what format did you import it? Is it one of Doc James H’s foils? 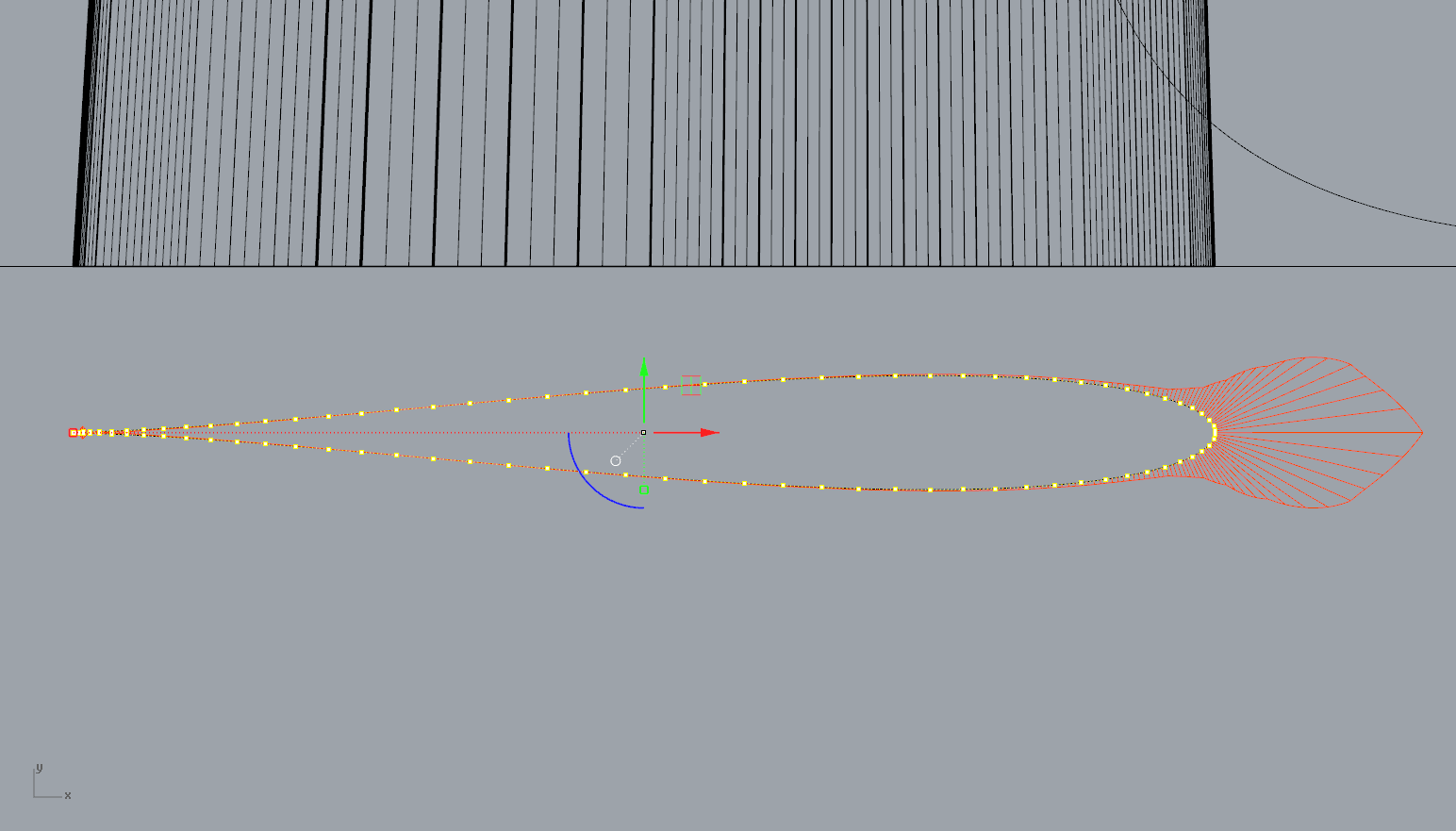 Here is a sailplane design of mine that I did using Rhino and T-Splines several years ago.

You do beautiful work. I am wrestling my way through it slowly.

Thanks, I’m interested in seeing that foil in the DAT format and using the import parsing script I mentioned earlier. I will try and look up a like to it for you as well.

Minor variations in airfoil profile aren’t as important as many people think. What is important is curvature discontinuities, both chord wise and span wise.

A useful technique for checking whether 2-rail sweep modifies your airfoil significantly is to cut sections at a few places along the span, scale the resulting section to the chord of the master airfoil and do the CurveDeviation as davidcockey suggested. I think you’ll be pleasantly surprised at how close they are. For the part of the wing near the tip (the portion you originally tried to develop separately) it’s much more important to get a nice continuous-curvature blend than to strictly adhere to the original airfoil.

@jodyc111: If the airfoil you show the curvature graph on is the original .DAT file data, try scaling the curvature graph in high so you can see the hairs on the main parts of the airfoil. I think you’ll be surprised at how wavy the graph is on a surface that should be smooth. I’d try it but I’m not on my Rhino computer at the minute.

Here is a new wing swept from the foil root you see with the orange curve scale cranked way up as AIW suggests. I haven’t imported the actual DAT file yet, this is the curve in the original file that is used to create the new foil and tip. 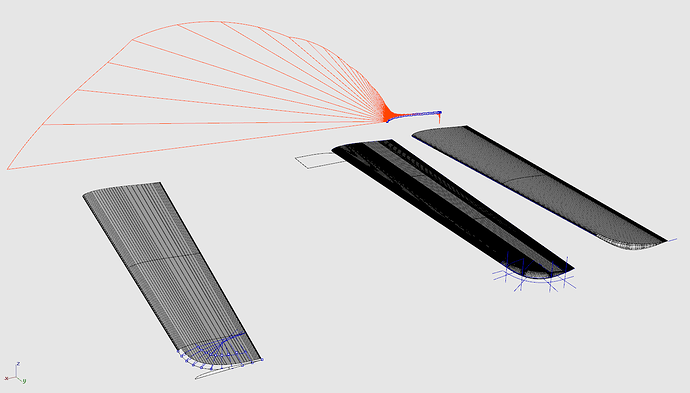 The cyan extrusion is what I used to create the half tips for tangency. 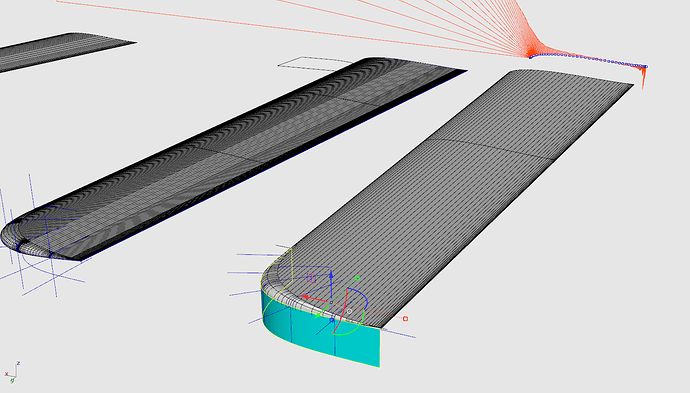 Thanks for all your help. The most important thing that I learned from this is to ensure that each and every curve is correct to start with. Trying to create matched surfaces with bad starting curves is a waste of time.

Those DAT files are really horrible. The trick now is to clean them up before extruding them.

Good that you realise the most important thing in CAD modeling, GIGO. Garbage In, Garbage Out! Not to say I am passing judgement on the DAT file. The curve that you had at the base of the original foil was pretty good, the one that I was highlighting and using curve display on. Did you generate that based on the DAT?

Here is the name of the excellent script that I use and can be found here somewhere, Pascal or Helvetesaur I think.

I’ll try it on the JH dat file and we can see.

Here is a link to the script

Thanks for the info. Just as an aside, how do you do your print screens. Mine always come out very low res.

Just tried the script on the JHSYM-10 and it comes in better than most NACA foil DAT’s. Here is a screenshot. Give it a try and play with some point editing to take out the very minor lump I see. You might hurt your head again though doing that stuff! 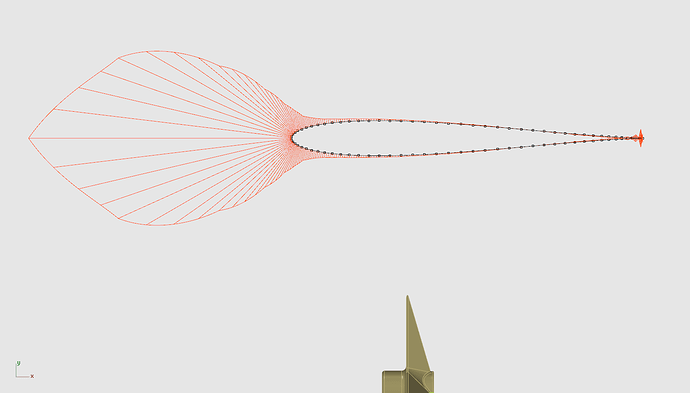 Another hint, use the trailing edge thickness as the minimum thickness for the tip. Create a rectangle with a rounded LE (for top or bottom surface only), extrude outwards and blendsrf back to the major tip section. With a bit of playing with this “rectangular” tip section, you can get a very nice tip very easily. 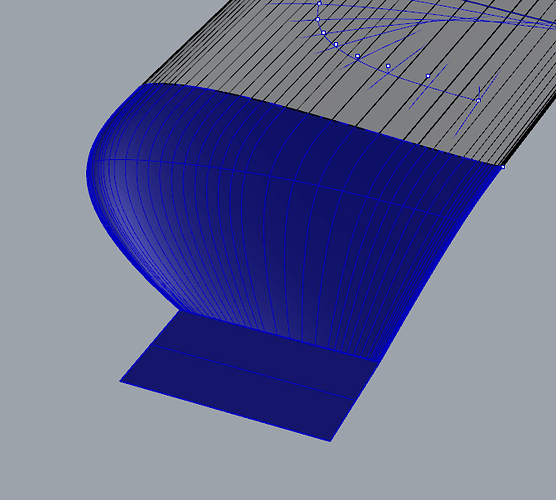 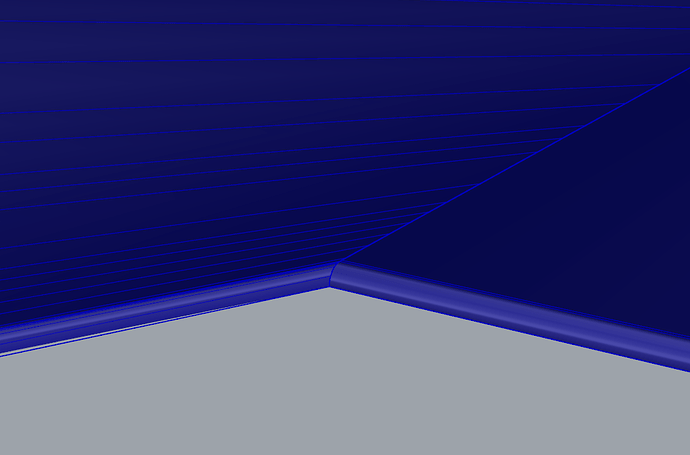 and it comes in better than most NACA foil DAT’s

You’re right. And what I’ve seen on “most NACA sections” is the reason I suggested amping up the gain on curvature graph to have a look at this one.

The corner joint on the side is problematic though.

All the fancy ways to make a wingtip are too much hard work. Let Rhino do the hard work for you instead of trying to force a rail-sweep that will never converge to a proper singularity.

Split your wing surface along the leading and trailing edges so you have two surfaces to work from, then choose the “blend surfaces” command from the “surface” menu ("_BlendSrf"). Pick the “tip” edges of the upper and lower surfaces and adjust the tangency settings, etc., until you have a pleasing shape. If you want a “sheared tip” then just slice the tip at an angle before you start the procedure described above. YMMV, but it works for me.

Caveat: Use airfoils having a blunt trailing edge (finite thickness). You’ll need the thickness for machining tolerances anyway, even if the final product is intended to be a razor’s edge or rounded. The procedure described above may not work for razor or rounded trailing edges; I haven’t tried it. If you must try it and it doesn’t give good results, you’ll find an easy workaround if you think on it for a second or two.

A caution: The airfoil .DAT file you posted was probably privileged data. You really should not post your client’s proprietary information to a public forum.

It is not a secret design. James puts his airfoils in the public domain.

Thank you, Ukktor; I had not gleaned that from the IP’s context.

The RC glider community has a pretty good open source thing going on airfoils. I found a post from the rcgroups.com forum (where I am also a member) from the designer himself stating that his designs are public. I did not know myself, but assumed the best and was not surprised about the results. RC pilots are good folks!

I must admit that I am still stumped to getting a decent curve for the elevator and the rudder. There is always an odd bulge somewhere.