After updating to 7.11 for Mac, dragging using the gumball axis indicator defaults to ortho unless you hold shift key. Used to drag anywhere and snap ortho when you hold shift.

Hi Zachary -
Dragging the axis indicator should always drag in the direction of that axis only, so what you are describing is the expected behavior. You have to use the plane indicator to drag the object anywhere - here in black (for some reason): 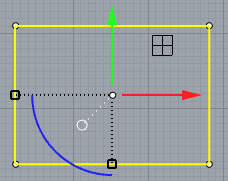 Hello - the 2d plane does now pay attention to Ortho - so if Ortho is on, that will affect the gumball when dragging the plane, and Shift to suspend Ortho will free it up.

Damn, this is a really bad for me, because the 2d plane used to move FREELY ALONG TWO AXES SIMULTANEOUSLY is now locked to move only to one axis. Why it’s made that since there is already a dedicated arrow for each axis? Now I’m forced to turn on or off the Ortho tens and sometimes even hundreds of times per day and that destroys my workflow.

I suggest to make that behaviour optional, otherwise the recent change makes it too disruptive to those who point edit all the time. I basically spend 2/3 of my modeling time in point editing the surfaces and I use both, Gumball arrows and Gumball 2d plane… Also, I keep my Ortho turned on all the time, because I want to prevent accidental moving of objects in a non-ortho direction. Now there is a real conflict between Ortho On and Gumball’s 2d plane…

Also the change for the gumball to remember last drag dimension is inconvenient as dragging with the gumball is not accurate like clicking the gumball and entering a value. It was more useful before that the gumball would recall the last entered value.

Manually dragging an object via Gumball’s arrow is quite accurate while Grid snap is turned on.

Hello - the 2d plane does now pay attention to Ortho - so if Ortho is on, that will affect the gumball when dragging the plane, and Shift to suspend Ortho will free it up.

I have also noticed that, it’s a bit inconvenient also for me… is there a way to go back to the “old” standard?

I’m also thinking: in what scenario are those “planar handles” indicated by the red arrows useful to be used in “Ortho” mode? isn’t it exactly the same as dragging using the gumball axis-arrows?

and then why not just use the axis arrows instead? 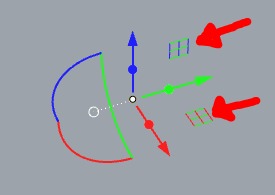 Why was the change necessary? Why change such a frequently used tool to make it less convenient?

The downgrade of the Gumball’s square handle that’s now restricted by Ortho and longer allows free movement is also mentioned in this topic:

New Gumball is devastatingly bad. Here are some proposals how to fix it Rhino for Windows

Since several weeks Gumball had some changes, some good and some really bad. These are the bad things that are destructive for the modeling, and here is my overview of them, along with some proposals how to fix the issues: The square handle whose original purpose was to enable to freely move the selection across two axes simultaneously is now doing the opposite while Ortho is active! Instead of providing a free movement, now it’s restricted by Ortho even though the dedicated axis arrows exist…