I was using grasshopper to generate shapes to render, without baking them into the rhino document. This guy: 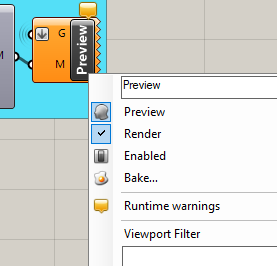 I’ve noticed that sometimes when there is no longer any geometry in this component, the reference to those “temp” objects remains with the “Named Views” tab. When I click into the tab, my console message would read:

There has been a few instances where this crashed my rhino altogether. Not a critical flaw but sometimes makes me lose a bit of work unexpectedly.

I’ve noticed that sometimes when […]

I got a similar message on the command line when I played a bit with this but am unable to reliably reproduce it here. If you have steps that always cause this, I would be interested in trying those out.

There has been a few instances where this crashed my rhino altogether.

I’ve never seen this crash on my end. Please make sure to send in the crash report with a description of the workflow any time you come across that.
-wim

I’ll come back to this thread if it keeps happening

resolved –
Meanwhile, I just moved to Rhino 7 and encountered two new problems.
One is that the preview component doesn’t add the geometries to the render at all
Second is that the ray tracing rendering breaks my Rhino.RhinoApp.RunScript() sequence.

Please share a GH file that does this so I can investigate.

Also, probably good idea to change tags for this topic if you’ve moved to Rhino 7?

couldn’t reproduce it. it was probably a one time thing. i might have intervened on the user side during script run somehow. but thanks for the note.