The programmers already made Rhino totally capable of being parametric by adding named selections. All that’s holding it back is a weird refusal to provide a versatile and intuitive UX in front of this existing capability.

If they give us access to named selections in Grasshopper, Rhino will be capable of being usefully parametric.

If the devs let us reference a Rhino named selection of one or more subobjects in grasshopper and transform them, Rhino effectively will have a params function similar to Fusion’s.

context bake needs an “attributes” input just like the bake components in Elefront and Human, and that probably means GH needs a native attributes component.

And as long as I’m wishing for things, GH2 should be able to reference objects in Rhino and pass them through GH components while maintaining their attributes unless we intentionally alter the attributes.

I should be able to reference a blue curve named “blue curve” on Layer 1, transform it in grasshopper, change it’s color attribute to orange, change it’s name to “orange curve” and when I context bake it, it should end up going back to Layer 1. If there’s an orange curve on Layer 2 that’s referenced in the same definition, it should default to carrying it’s attributes through the definition, too, so that if I turn it blue but don’t change it’s layer, it defaults to getting baked back to Layer 2.

prob already on their list
yes, with GH2 (hopefully on its way) and GHplayer maturing, it’s def going to change the limits of
what you can do. It is a great feature & has already made good progress giving the small team (Steve?

The question of how to implement named selection access is interesting, because there’s potential for breaking things, I think.

So my first thought would be to have a dead end transform component, like custom preview, with the zigzag on the right side, and to have an input for the named selection, below which would be a transform input, with the ability to click a plus and add more, so the transformations are sequential.

Hi @yelenaye . First, I wanted to say impressive work! Keep posting. Secondly, I’m looking into the ‘ghosting’ issue that you’ve reported a couple of times. I believe I know where the issue is coming from, but I’m also having trouble repeating the issue that you’re showing. Do you have an example file that you could share where this ghosting is persistent after you run the GH Player? Does it always show up in the viewport regardless of the display mode (ie. wireframe, shaded, rendered, etc.)?

hey @AndyPayne, thnx for looking into this! yes, ghosting shows up in all view modes.
just tested on the latest release as well. I made a dummy GH testing file. just draw box
and run the player.Ghosting_Test.gh (5.6 KB)

Hi @yelenaye. I’m not sure I’m seeing the same “ghosting” artifacts that you’ve shown in previous videos (at least on my machine). Below is a gif I created in v8 (but I tried your file in v7 too). After, the GH Player command is called, I do not see any other grasshopper artifacts showing up in the viewport. Is this what you see on your machine?

oh that’s weird @AndyPayne
what ver are you running?
here’s what I get:

Thnx! I tested on my desktop, latop, V7, V8 and all the same
I do appreciate the attention to this issue

Could you do me a favor. Do you think you could remove any plugins you might have installed (just move them to some temporary folder on your desktop) and then try running your Grasshopper Player command and see if the ghosting still persists. We can’t seem to replicate the ghosting issue here and one thought was that it could be one of your plugins which might be keeping the display pipeline open.
If you remove all of your plugins and then the ghosting issue is resolved, then we can start adding the plugins back one-by-one and try to determine which one might be the culprit.

got it! will keep you posted

ghosting is gone. I’ll see which is the culprit!

a bit of bad news @AndyPayne ! ghosting is back after it temporarily went away.
I emptied the components & use objects folders
somehow nGon and Wombat persisted ?? (how do you uninstall those?)
but now the ghosting show up again

*Edit
uninstalled them via package manager, but ghosting still persists 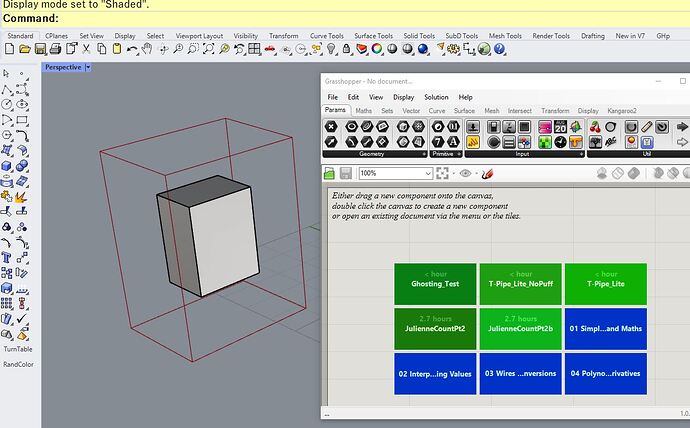 *Update:
uninstalled Rhino 7, and reinstalled it.
ghosting only now appears to show up with Kangaroo (even without ‘Grab’)
here’s the test file.
Ghosting_Test.gh (11.7 KB)

*Update
Ghosting appears to show up with no Plugins installed nor Kangaroo used. very weird!

I tested the file and there is ghosting, it disappears only after restart Rhino.
If you hide everything in GH file it work fine.

number 1 is especially sad, as that is one of the most powerful things to do in GH, to programmatically add key/values to objects, that you can then use elsewhere like metadata.

Any timeline for adding this? Not before GH2?

no support for attributes

How are you currently adjusting attributes in Grasshopper?

How are you currently adjusting attributes in Grasshopper?

Edit: I have to say, it DOES work to use a bake component from Human with GH Player, it just isn’t that easy if you also want to create layers and such, where the execution order really matters, but that’s not exclusive to GH Player, but a general GH problem.

ps: it would be nice to instead of a Get Boolean, there was also a Get Enter, where you just want to press enter at the end and it triggers a boolean true. If I just have get boolean, I then have to click by mouse or enter “true” and then enter.

Object attributes are not a native data type to grasshopper. I’m hoping we can add this to grasshopper in Rhino 8 (GH1). This is what we would need to support context baking of combinations of geometry and attributes.