Hello, I noticed here that Rhino on my smartbook does not see a whole GB of graphic memory … And this is unpleasant, since it is graphic memory that is used for textures, and I just recently had problems displaying a large texture on a 3D mesh , only a reduction in size allowed her to display. Can I fix this thing somehow?

How are you determining that?
Rhino only relies on the Windows OS to get access to hardware resources and doesn’t impose any limits on its own.
-wim 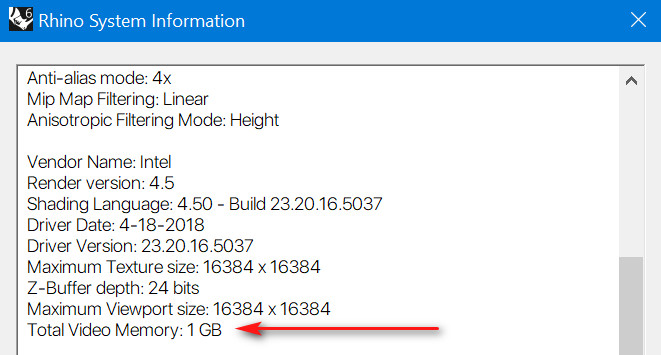 But in the Task Manager (Windows), I see almost 2 GB

Hi - yes, the information that is in the SystemInfo report is just what Rhino manages to receive from Windows. It is not a number that it sets on its own. If Windows sees 2GB and allows Rhino to use that, then Rhino will use that…
-wim

That SystemInfo report isn’t “real,” it’s just a bit of text that Windows sets somewhere and Rhino reads, I think on older systems it “tops out” at 1GB.

The more important thing you’re missing is that your video drivers are out-of-date, and Intel integrated video is kind of crap.

The same Photoshop seems to see all two

think on older systems it “tops out” at 1GB.

Something did not understand

The more important thing you’re missing is that your video drivers are out-of-date, and Intel integrated video is kind of crap.

If you are using Rhino 5, it’s probably not very important to have the latest driver. If you use Rhino 6 or 7 a lot of user experience reported on this forum indicates that the latest drivers solve a lot of problems.

Something did not understand

I mean it’s not to be taken very seriously, it’s not actually measuring how much video memory there is. I don’t know how integrated video works, if it allows a maximum of 2GB that would seem to mean it can vary, so if you just ask “how much is there?” for the answer may vary.

Okay but UPDATE YOUR DRIVERS. Also, the problem with your performance isn’t that it’s not using all 2GB of possible memory, it’s that it’s Intel Integrated video, that it works at all for OpenGL is a minor miracle.