I`m a user of Rhino 6 and Rhino 7 WIP.
Is there any more option planned in Rhino 7 to see something like Audodesk Global Matching Analysis? Something more than zebra and matcaps?

Is it possible for me to use Rhino 5 as Rhino 6 user? May I buy that plugin somewhere or maybe it’s free to use because it`s discontinued?

Maybe I’m missing something but how do I know how good continuity is if matching is near to correct (but still incorrect because of bad inputs) without a tool like that? Is there something more which I`m missing about?

Can you show us the situation you are trying to solve? Do you have an example model?

There are a number of tools to control continuity, perhaps we can come up with a workflow for you.

It is difficult to answer the question of whether you are missing something until we are able to answer what tools are available for the specific modeling situation you are working on.

I mean about that part of that specific movie: https://youtu.be/oVauNTedU-M?t=2614 .
But this is related to a whole movie. There is talk that there is no option for user higher than Rhino 5 to take that useful information about how much continuity is preserved with numbers which I should control.

No, I don’t have any real model example yet. I’m watching a lot of tutorials about modelling in Rhino and question is theoretical (learning process). If you will watch 3 minutes of that movie you will know what I`m talking about.

That specific set of commands are part of a plugin that Autodesk decided to discontinue. So, people cannot use it anymore for the newer versions of Rhino. We are never excited when they decides to take tools away.

We can take a look at any odeling you do in the futrue and help determine if you can get the continuity you need for in your project with Rhino 6 or Rhino 7.

Thanks for your answer. My question was rather to check if there are any chance to expect that kind of feature in Rhino 7. I’m not saying it’s needed or not because I don’t know enough to judge in that topic. I watched those tutorials and I liked that type of workflow much. That’s why I`ve asked.

@mdesign you may want to take a look at _EdgeContinuity
It let’s you set pairs of edges to evaluate continuity wile you change the surfaces.
It doesn’t select all the edges automatically as VSR, but it’s an interesting enhancement.

@laborda Thanks a lot. So I missed something. Is that the numbers behind both are the same? It looks that is same functionality limited only to one edge but it`s not a problem. Thanks for sharing this.

you can define many pairs of edges, adding one by one. 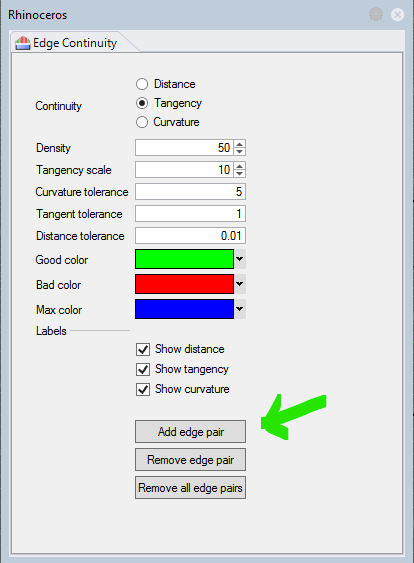 It is dearly needed and requested multiple times.
The proposed V7 command " EdgeContinuity" does techically do what you are asking for, but in terms of usability it just doesn’t cut it.
Needing to select every pair of surface edges one by one makes it all but unusable for complex surfacing imho.

you can define many pairs of edges, adding one by one.

I am probably asking the obvious here, but shouldn’t there be units inside the window for Curvature/ Tangency/ Distance tolerance based on the file units? That makes judging it a little easier imo.

After passing 7 beta stage I’ve got only v6 (I`ve bought it a few months ago so, for now, I have no spare money for the update). Do you know any other way in v6 to check surface continuity or I have to check it manually curve after curve?

@mdesign I still have V5 with VSR installed, at least for single span and complex surfacing there is nothing that good for me inside rhino.

I can’t understand it. I feel it’s a very important tool for complex surfacing analysis which is a must in software like this. Why no one developed a tool for that. Even paid addon. It’s version 7 now and VSR was in v5 times. It’s a lot of time. Rhino is one of the best NURBS surfacing software. It deserves a tool like that. I left on version 6 but even if I upgrade to v7 I should still be forced to compare edge pairs what is time-consuming. I feel that surfacing analysis based on calculation is far more precise than based on zebra or on emap. I can’t imagine comparing edges on complex object pair after pair to see If I have G1 and G2 where I want to have. I feel that feature like should be most important for a NURBS surfacing software.

Well VSR was developed by people that created tools for Icem Surf and Alias, these are the most complex and specific tools in the market, and obviously not for all users and easy to code and integrate. Unfortunately we are not the focus for mcneel at the moment. But it’s good to post and let them know what we need, because anyway developers here listen to users more than any other company.

I hope to see it in v8. I can imagine that is hard task and not popular on first sight for fresh users. I’ve started to learn rhino 6 months ago and I feel lack of this tool. I think that PRO users also feel lack of that analysis tool but for sure many PRO users still have v5 and old VSR plugin (like you) which I can`t to have because I’ve started since v6.

I try to work with v5 and 7, but copy paste can’t be done between them, so sometimes I use the 3 versions too.
But depending on the kind of project I use just one version, a more logical process…
This is another topic, but vray doesn’t like v5 either, so if I need renders I must use v7 or 6.