I wanted to try out cycles but i completely don’t understand where i should put roughness map cause gloss is only color driven in custom shader.

Is there any reference which slot is what cause for me logic of this material system is bit off in general - i thought it will be based indeed on principled bsdf node.

How actual rhino shader relates to this https://docs.blender.org/manual/en/dev/render/cycles/nodes/types/shaders/principled.html?

Where are subsurface, metalic, clear coat or anisotropic channels?

Can somebody show me a setup which uses albedo/roughness/metalic/normal workflow?

The materials Rhino comes with are not the same as what you can do with Cycles - Raytraced/RhinoCycles only converts the Rhino materials to a shader graph, but doesn’t yet have a material that exposes the principled BSDF inputs as such. The conversions do use the Principled BSDF under the hood though.

The Rhino material (Rhino Custom material specifically) does not have a way to drive gloss with a texture. And bump channel for Raytraced is only like a regular bump map, not a normal map. That means essentially a grayscale image.

Don’t look at the Blender Cycles manual when trying to set up materials.

For Rhino 7 we’re looking into moving to a more PBR-based workflow based on Principled BSDF.

The Cycles engine powering Raytraced/RhinoCycles is the very same Cycles engine in Blender, with some additions to cater for i.e. Rhino mappings (environment and texture). I sync with upstream Cycles regularly (every few months).

I have a plug-in in the works that will provide such a PBR-type material based on the principled BSDF, but it is still some time out while I am working on getting a useful UI created for it. I don’t know yet when I’ll publish it, but the prototype already works fine - it just isn’t ready for the public yet. 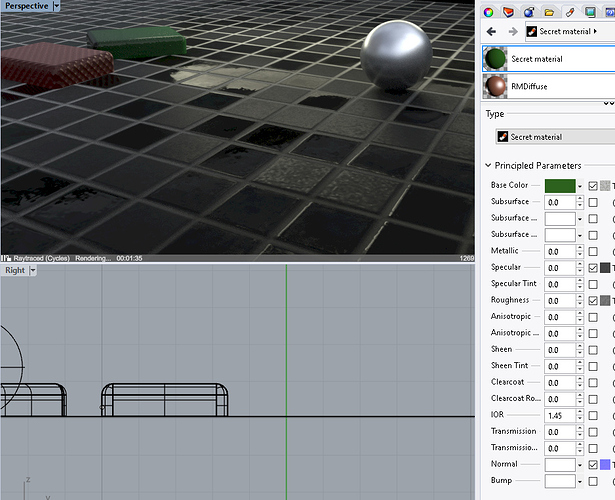 Thanks for the explanation. I understand that current Cycles implementation is just very simplified.

Any ETA on this?

We know v7 will not appear out from nowhere in the near future, so it’s not a consolation.

Andy sure but i can’t treat WIPs as working environment

But you can install Rhino 6 and Rhino WIP at the same time.

Any ETA on this?

No specific ETA, other than In The Future When It Is Done ^.^

btw. i think im not the only one here

@nathanletwory i found this https://github.com/mcneel/GhShaderNodes/releases but i can’t find cycles xml in rhino is there any source where i can find it?

Cycles XML is accessible after running TestShowPrivateContent. Note that this is behind a test command, so not officially supported…

But enough to play with nodes

I have a plug-in in the works that will provide such a PBR-type material based on the principled BSDF, but it is still some time out while I am working on getting a useful UI created for it. I don’t know yet when I’ll publish it, but the prototype already works fine - it just isn’t ready for the public yet.

I know you have your hands full with the release of Rhino6 and Cycles, but I’m on board with D-W here – as much of the Blender Cycles Options as you can expose in Rhino Raytraced would be awesome. As long as it’s stable so I can use it for paying work jobs, I’m on board and would love to see what you have planned or any ideas you have.

Looks great! is there any news regarding the plugin for Rhino 6 or is there ClearCoat etc. in Rhino 7 WIP? That would be amazing!!!

I have been creating and fixing up an improved version of the “secret material” (calling it “PBR-style material”). There are still a few minor bits to do, but I think I will be able to release it in a few weeks. It should work with 6.12 and newer. Just keep an eye out for news on this forum.

Reference PBR material with RhinoCommon. Contribute to mcneel/RhinoPbrMaterial development by creating an account on GitHub.

Check the README of the repository for info on how to install:

Hi, I tried the TestPackage and could set up a PBR material,
but when I reopen the file, the PBR settings are gone.

What Rhino version are you using? You should be using a 6.13 release candidate for it to work properly. Hmm, 6.12 should work too.

edit: I already see what the problem is. When starting Rhino again the RhinoPbrMaterial plug-in doesn’t get automatically loaded. So when loading a file with a material from this plug-in you’ll get the placeholder material, although the plug-in really should be loaded. I have logged an issue for that RH-50846.

So, after startup of Rhino first load the plug-in, then the file.

I have updated the plug-in to autoload on Rhino startup.

Hi guys … i dont create new thread but i have only two questions.