Is theirs a way i can extrude two surface into one solid mass? without the help of grasshopper?
I know is possible with curves and with the command loft, but is theres a way i can do it with surface?
Thanks

Hi @angelelpipo
Do you mean actually extruding them (then it’s ExtrudeSrf) or do you mean connecting two surfaces, as you would with loft? If its the latter, you can loft using the edges of the surface as input and then join the top and bottom surfaces to the sides. If neither of those, you should post an example file - makes it much easier to understand what you are talking about.
-Jakob

Thanks for the quick reply, here’s an image of what I’m trying to say

so basically, I want figure 1 to look like figure 2.
an extrusion that connects
the two surfaces.

I know it can be done by using grasshopper or using the command loft and selecting the curves. but is there any quicker way to select the two surfaces and then extrude them to one solid mass? 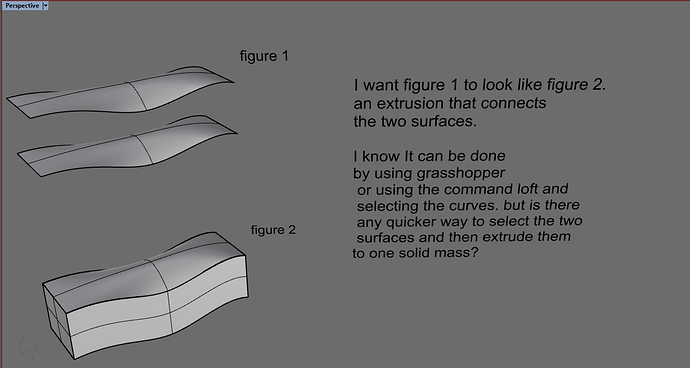 here’s an image of what I’m trying to say

Generally, a 3dm file is more useful. By the looks of it, it seems that the two surfaces in figure 1 are identical. In that case, you can use ExtrudeSrf and extrude one of those two.
-wim

or, activate gumball, drag the gumball down and before you let go press and hold ctrl. that will extrude it either.

in case the lower surface is different, extrude past the lower boundaries, select all and use CreateSolid and delete the rest. or use * infront of Loft like so *Loft that will keep loft open and you quickly click all the lines through till you are done.

Thanks for the quick reply,

Here is another example, different surfaces, and I want to extrude them to one solid mass, as you can see in the image. I also include the rhino file.

I am aware of using the loft command and selecting the outlines of the surface, which is how I did it…but it would be more convenient for me to just select the two surfaces and make the extrusion right away. 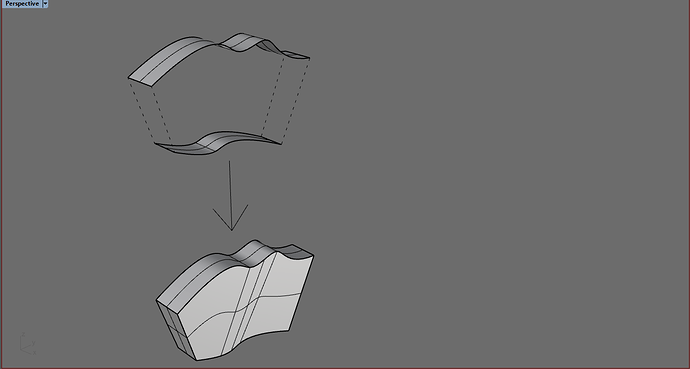 well i believe you are left with a lot of already created surfaces why ever, so your option then would be to use DupBorder and loft, which is kind of the same effort.

use DupBorder on all surfaces at once then lock the surface maybe use SelSrf or use SelectionFilter and loft the closed boundaries as you would loft the surfaces.

An extrusion in Rhino is the result of Extrude and some related commands and is a particular way of storing the shape using less storage space.