I see that there is a convert option that does this job, but I can’t find any functions in the Rhinocommon SDK that can do the same thing in one step. Does anyone know how to convert a freeform curve into arcs? Is there a way to see the algorithm behind the convert feature?

It’s in Rhino: Curve->Convert->Curve To Arcs

I was confused because you posted this in the Grasshopper Developer forum, whereas this concerns Rhino commands and Rhino SDK. The ConvertCurveToArc logic uses bi-arcs as I recall which are not exposed in the SDK. Grasshopper also has a bi-arc algorithm (but that code is part of the CurveComponents.gha project, not Grasshopper.dll).

I copied my C# bi-arc fitter into a GH C# component. The attached file contains a script component which creates a collection of tangent bi-arcs that approximate a curve.

There are two problems with the code.

1- the last or the first arc part is missing.

2- if there is a kink on the curve, the code doesn’t work well. 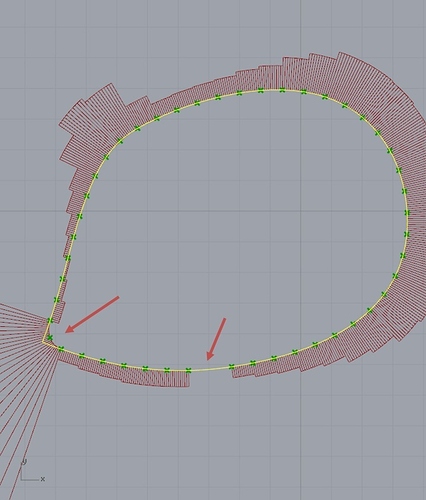 Try the adjusted script attached. It can create very short biarcs near kinks, if the original curve division yielded a point nearby. This can be handled but would require additional code.

Thanks, that works. And also thanks for the really fast reply.

Hi David, thanks for your script! I am trying to understand it more by reading your code.
One question I have here is how you adjust the ratio/factor in the code. It seems that you are using 0.5(factor) / 1.0 (ratio) as the initial guess, which means it is a one arc instead of a bi-arc. I understand the logic. But I assume there should be some algorithm that adjust/optimize the ratio to find the bi-arc. I did not see it. Maybe I missed it. Do you mind to point out where is it? Thank you!

Thanks a lot for the c# component and scripting! I would like to second the question that @jingwen.wang suggested.
I am also looking to adjust the ratio of the biarc, from the default 0.5 to 1, meaning I wonder like to only bias towards the first arc to approximate the each segment of the division. It is possible to so with Grasshopper BiArc component, however I wonder if its possible to do so within the c# script?