I’ve been useing T-Splines for almost ten years, and only now I’m starting to learn Rhino. I started woodworking an year ago, so I need to do the technical drawings, etc.

Can this shape be fixed, so that the fillets would work? Or should I do a whole new object from the very beginning?

Thank’s for Your help!

Ps. the images seems to be in the wrong order… 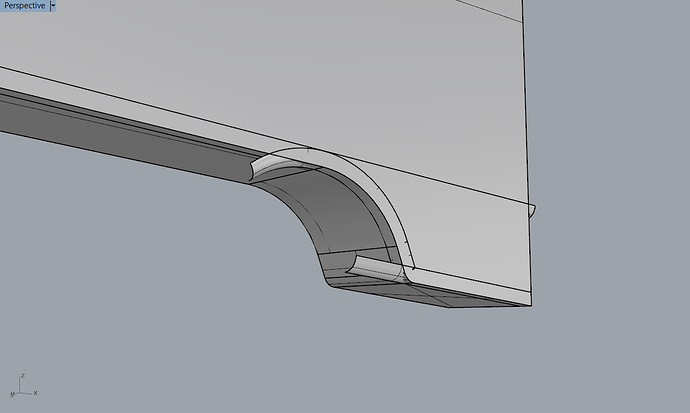 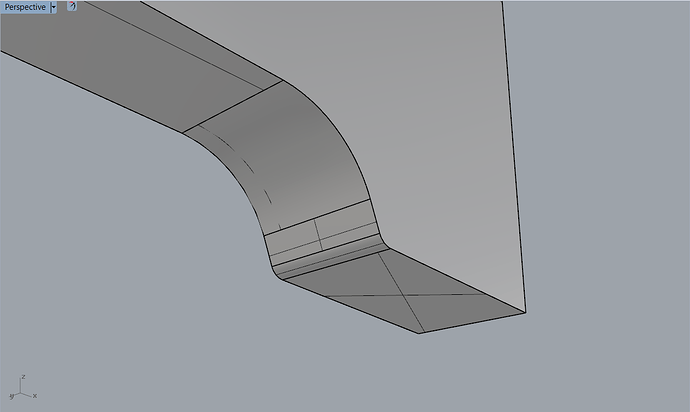 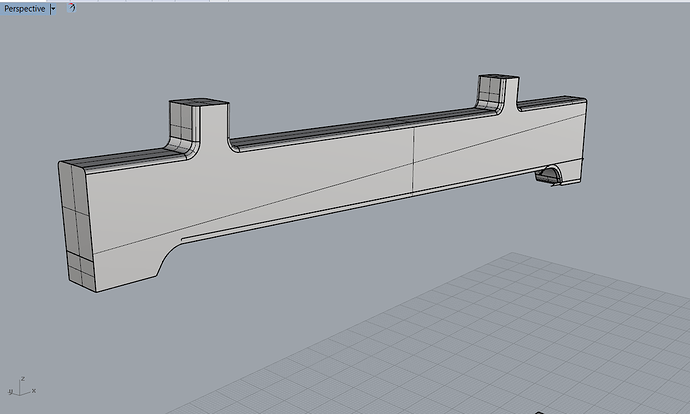 Hello Johnny
In these situations it’s always best to send the file if possible. But, from what I can tell, your fillet is intersecting itself on that small curve (which looks to be about the same size as the fillet.

It’s better to build to intersections and then add the fillets. Your second image shows a small fillet, like the ones that fail, already in place. Rhino cannot handle such things, like a solid modeling software does.

Hi Johnny - As Tone says a file is best but:

I tried with the ‘existing’ fillet 0.4 (radius) and then put the new fillet 0.3 (all over), but the result was the same. Except I got a new issue in the other end

Propably the whole object could have been built better…

Attached are those three images after doing the actions above.
…plus the original object as a Rhino file (without any radius).

Thank You guys for those answers! 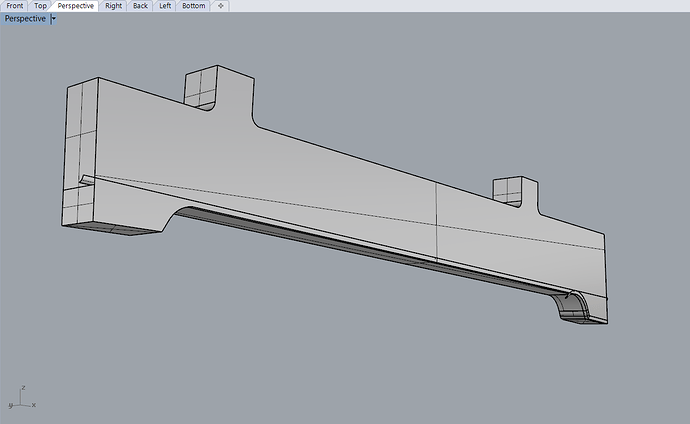 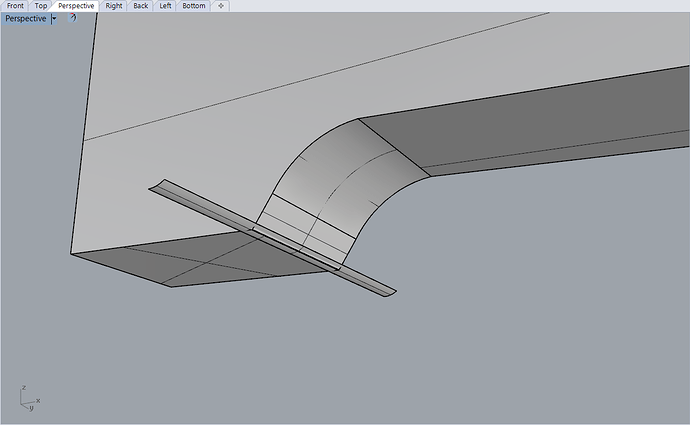 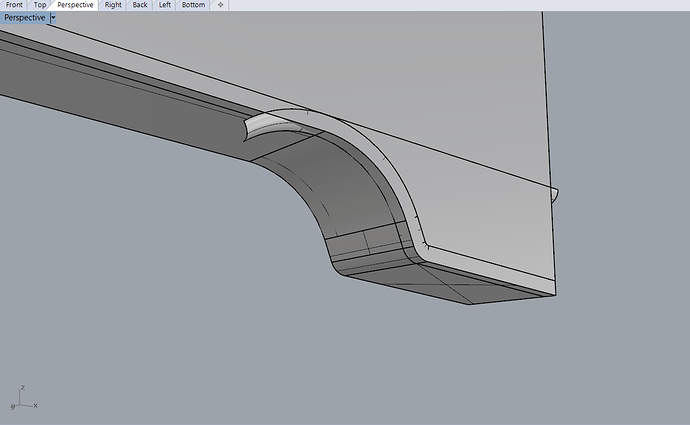 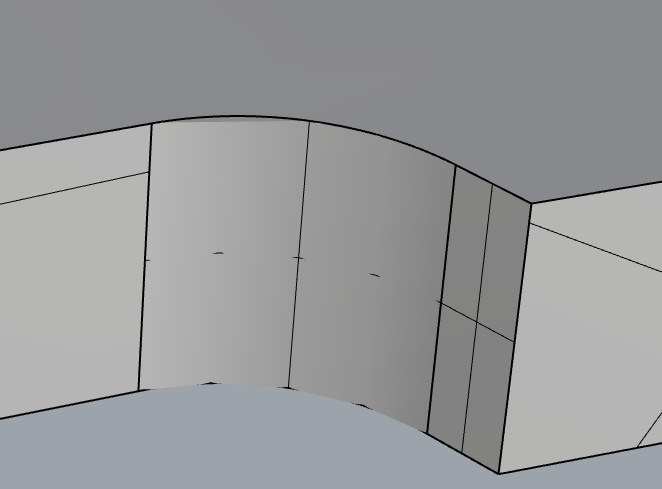 are not quite tangent to the faces on either side - I suspect that is the reason why the new fillets do not want to negotiate that edge cleanly at the top. I’d start by replacing those fillets with new tangent ones - FilletSrf will help, or go back to the original outline curve and clean up.

Hardly understand what You say

…ideologically yes, but can’t quite fulfill that with my Rhino skills.

What if I delete everything else and keep only this big planar profile shape, and then do the ‘offset surface?’

(But maybe after that it’s more difficult to move certain objects in / on this whole form with Solid Tools when there are less edges? Like those two ‘buttons’ on the object? Or maybe not, I can always do extra edges with ‘Split Planar faces’, if that’s what is needed to move some part of the object?).

Just curious, but what did you use T-Splines with for almost 10 years if not Rhino?

I don’t know if You have used T-Splines, but you can use it inside Rhino without (hardly) any Rhino commands. Of course layers, zoom, etc. but to be precise, I don’t know if I used even a single Rhino tool when building or editing an object (while useing T-Splines all these years).

Actually I’m a graphic designer, so it has been more like a hobby for me to design furnitures only on the screen. BUT an year ago I started to study woodworking, so I’ts time to put my T-Splines plans forward.
Meaning: to remake all those plans with Rhino tools.

T-Splines is nice when playing this ‘back and forth’ game when manifesting, changing and editing ideas. BUT what has been interesting for me (now) is, how much Rhino Solid Tools has that type of editing tools as well. At least compared to what I was thinking (of course, the whole ideation is different between T-Splines and Rhino).
And of course Rhino tools are precise. It is the only serious way to do technical drawings from solid detailed object (I quess).

So, yes, you don’t find much Rhino skills (yet) in this direction

Yes Johhny I have been using T-Splines since it first came out in BETA but can’t imagine using it in Rhino without having pick up some Rhino basics along the way in such time. A bit late to start making big plans for using T-Splines since it has been killed off by the good folks at AutoDesk. Still, better late than never and have a go at getting an understanding of the Rhino workflow.

Hello @Johnny the main reasons why it fails is that you have a lot of tiny surfaces in those aparently single edges, that leads to a 2 bad surfaces which also will break the fillet. The better solution I found is change the Cplane to the object and redraw some curves. then apply the .4 radius all at once.

Yes, I know. I’ve tried (every now and then) Fusion 360, but it just not that simple (once getting used to ‘T-Splines in Rhino’ commands).

T-Splines is gone (in Rhino) but as I said, the designing has not been so serious thing for me so far. But now it is. Or actually it will be, when getting used to Rhino because of those ‘necessary technical drawings’ in my upcoming woodwork life.

(I said ‘it’s the only serious way to do technical drawings…’. Of course there are other proper pograms, but I ment inside the Rhino).

Immediatly I was wondering how to redraw only part of the curves?
I looked at some youtube videos and maybe got some ideas…

changing the Cplane allows you to draw them more easily, _DupEdges in the front face, explode and use _Connetct to recover the original vertices. Check for tiny segments or points and delete.
Once there, apply the bigger fillet curves and then extrude.
Then the .4 fillet in the needed edges, if they are the same, should works at the same time.
Good Luck!

Perfect, Diego!
I tried, and that worked out quickly.

use _Connetct to recover the original vertices

@Diego. Not familiar with this command. I will guess it is _Connect, but why the initial underline? Does it turn a curve into an array of points? Thank you for your insights.

@Johnny. What happens when you use the tSplines command to convert your models to NURBs surfaces?

Hello @mcg the command is “Connect” you are right. The underline is to use those commands regardless of the language you have installed.
Also, there are some commands which have different behavior using middleline, like -Rebuild for example ( v5).
About the t-splines conversion I don’t think that sub-d is good for this case.

Yes, that original thing wasn’t made in / with T-Splines.
But generally speaking converting to Rhino works well.

Thank you Diego. I had not known about the command punctuation — very useful. Michael