Apply image to a surface

How do I apply a photo, or any jpeg image to a surface in Rhino Mac?

PictureFrame does not do what I need. It does not work at all. In modeling mode it looks OK, and as soon as I render it is all bad.

I may have asked the question incorrectly. What I want to do is add a “decal” image to one or more flat surface(s) of a polysurface solid. This is what I found in the Rhino Level 2 training manual (for Windows).

I cannot find the same icons and/or command in the Mac version.

Check the Rhino Help for the “Squish” and “SquishBack” commands, these may be useful for what you want to achieve. An example for text to a surface with compound curving is given. It seems to work only for curves, but you could use hatching and explode it into curves, as I did in this picture: 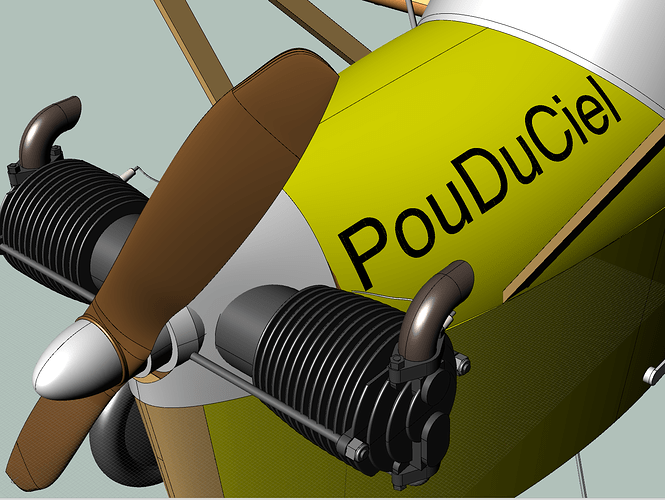 Unfortunately, the “Decal” feature is not yet implemented in Rhino for Mac. However, “Decal” is not the only option, if I am understanding your original question.

Have you tried adding a bitmap image to the Texture channel of a material?

I have tried adding a bitmap to the texture channel of the material in question of the object. But then the image (text) gets distorted, and it also does not appear on just the one surface I want the text to appear on, but on all surfaces.

For example if I want to add text to one side of a cube, and I add a bitmap image of the text to the texture channel, the text shows op on all 6 surfaces.

Additionally, if I already have a texture chose like “brushed stainless steel”, I cannot add an additional texture of text on top of that. Or maybe, I am not understanding this correctly.

I have tried adding a bitmap to the texture channel of the material in question of the object. But then the image (text) gets distorted, and it also does not appear on just the one surface I want the text to appear on, but on all surfaces.

I see. Thanks for the clarification. It does seem like the Decal tool is ideal in this situation.

Has there been any progress on this? This is a function that I really need as well.

The Decal tool will not be available until Rhino 6 for Mac. Unfortunately, we do not yet have an ETA.

Since I work a lot with laser engraved images and text on stainless steel “decal” is something I really need to be able to complete my designs in Rhino Mac. This is not possible. And I am not going to get a PC and Rhino Windows.

This is very frustrating. I have been waiting for this for more than a year and a half now. To now finally be told that this will not happen until Rhino 6 for Mac and with no idea when this may happen, this angers me.

in case of simple text as shown in your example above, you can workaround the current situation by creating the text with the _Text command, _Explode into curves, then _Project them on the surface(s) and _Split out the actual letters so you can assign a different material or color to them.

btw. when assigning a material (with texture) it means that the whole object gets that material. To assign the material to individual surfaces only, use _ExtractSrf so you have seperate objects. To understand how a texture in a material is assigned (mapped) to a surface, try it out with a simple plane. You might be able to create the same what a Decal does just by extracting a surface and using a texture with an alpha channel.

IF I put an image “decal” on a model using Rhino5 for Windows then import it in to the Mac version will the decal still be there? I guess I’ll just have to try, but I’d prefer some feedback before wasting the time and effort. I have too long a list of tasks to do, but I love My Rhino for Mac so I hope you guys can get that released soon. I know your dev schedule is wicked slow. Hey not complaining Do it right guys it’s why I love your stuff. Keep up the great work over there in Wenatchee. I’m in Spokane.

PS is it possible to tour your place? I’ve always wanted to check out the McNeel dev center. I have never loved a software platform as much as I do Rhino for Mac. I’ve modeled in countless apps, but this is by far SUPERIOR in every way for Nurbs modeling. For my needs. Yes still plenty of room for growth but it’s exciting to know you guys are still adding features that will be so useful.