Could you add the possibility to have multiple output from a Value list?
See attached images.

You can already output text, which can then be parsed to give either individual values or lists.
valuelist.gh (6.9 KB) 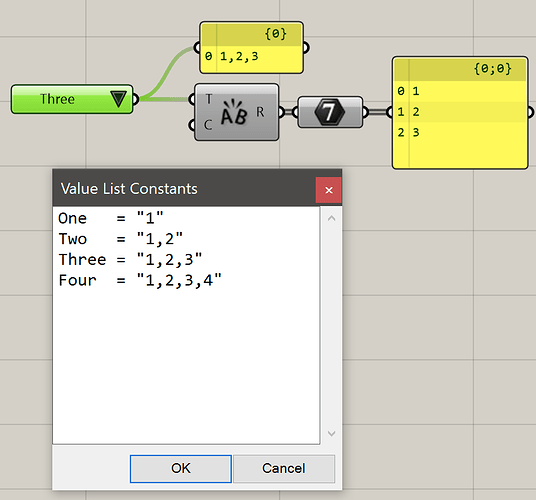 ps. I didn’t realise this was in GH2. I guess it would be a possibility to come up with some sort of collection notation that would allow multiple values per label. Filed under RH-43098.

other necessity/wish related:
Would also be great if “Value List” could be driven from the Remote Control Panel.

could be driven from the Remote Control Panel

You can start one if you want. It’s a pretty big topic though and I prefer to have threads deal with small topics that can be easily (1) developed, (2) tested, (3) released. Otherwise the correlation between the discourse discussions and the YouTrack items goes wrong.

Edit: Started a thread here and tried to break it into explicit points. Just for future reference, would it be better to make individual topics/threads for each point?