Will we get the Progress bar for the Mac in v7

This is really needed to add to the Mac UI
right now the only way to know rhino is doing calculations is to look at the OS Activity monitor.

I would kind of argue that Mac users need this even more than the Windows guys, since we generally have far less powerful hardware.

I thought this was already implemented for scripts in V6 MacRhino (maybe I got that wrong). However, most native Rhino operations do not have a progress meter even on Windows. Make2D is one of the exceptions maybe.

However, as I said above, most Rhino functions do not have a progress meter on either platform. It has been asked for for things like Boolean operations.

Thanks.
I’m pretty sure I have seen it in rhino videos here… [somewhere… can’t remember where exactly] and it wasn’t a Make 2 D operation. It was down on that bottom bar, on the right hand side…? next the the place where rhino Windows tell you memory and CPU condition. Which we also don’t have on the Mac and I can’t understand why? That info is available in the OS Activity monitor.

Like now for example, I’m experimenting with quadremesh and the new subD to nurbs packing. and I have to go to the Activity monitor to see if rhino is trying / gave up / succeeded / failed.

On the Mac, the progress bar is located in the command area: 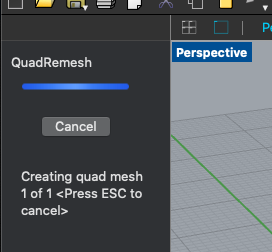 Thanks Wim
I couldn’t have known, as I always use the floating command prompt …

May I ask why is it there? Isn’t that choice of progress bar location, being biased against the users with floating command prompt?

Especially that many Mac users are using MBP a small screen space, and therefor wishing to save screen space by closing the left [command bar] in favour of the floating prompt.

Why not location it to the bottom status bar? plenty of unused space in there! and that will make it available to all users.
Please consider rethinking that choice.