Recently I’ve had quite some strange meshing artefacts which doesn’t behave very consistent.

The long yellow spike (pictured) stretching to 0,0,0 shouldn’t be there at all. The spike is sometimes there and sometimes not, when toggling activation.

The yellow blob to the right shouldn’t be there at all either. It’s actually an old debug-preview of something that has been removed altogether, mut it seems to have got stuck in the preview component. Strange. Caching problem?

Anyway, unfortunately the definition is so big and has such content right now that I can’t upload it. And possibly the problem will go away if I change anything (i.e. try to strip down the definition etc) so we’ll see if this problem remains.

Q: Has anyone else had similar problems? Is this a known issue?

Fig 1. The yellow (preview) meshes in this picture are strange.

Q: Has anyone else had similar problems?

I don’t recall having seen anything other than two reported cases in this thread:

Hello, Please see the above two videos. I was using the same file to display the movement of robot. After I upgrade to rhino6 6.7.18210.11281, it seems like the mesh display is disordered. This situation also happened in the prior version, but it can be resolved by reconnecting the mesh component in grasshopper file. Any ideas?? Thanks in advance. Regards, Shaun

Preview mesh is a mess / Baked mesh is OK Grasshopper

If I internalize a part of the definition generating the problem, the mesh mess disappears : Unfortunately, I can’t share this definition here, but I forwarded it to the programmers-that-be.

I had when I was playing around with a lot of clipping planes but didn’t reported it.

I also had the same issue. Especially, the script is doing the simulation stuff, which the geometry is moving around the certain path back and forth.
Is your geometry mesh?
This situation only happens in Rhino6 as far as I recall.

Here’s a fun one, using KUKA|prc 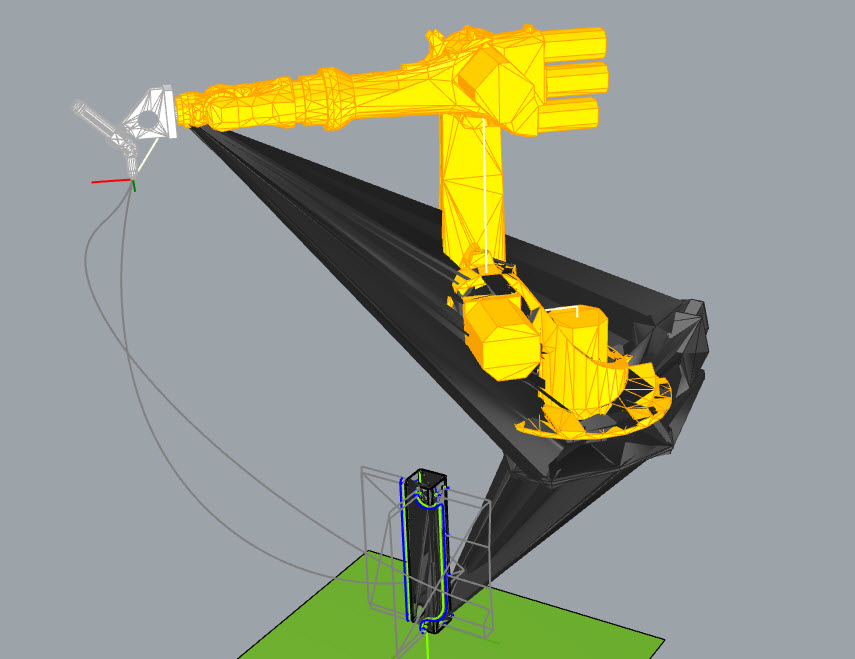 Hi all,
It definitely looks like the same problem. These “spikes” come and go. Often they attach to xyz zero, or to corners of some nearby Brep. It seems related to the Custom Preview component

I get the feeling that there’s a bug in the render code with some used list- or array variable not going out of scope and being filled up only in part with new values (assuming it was recreated and thus “cleared” of the old stuff) with remnants in the list messing up later renderings. Just the feeling I get.

In any case, the artistic effect is less than impressing.

Is your geometry mesh?
This situation only happens in Rhino6 as far as I recall.

Yes, base geometry a mesh, but I add around it all kinds of “probe objects” (lines, boxes, cylinders, points etc) to analyse features on the mesh. And yes, Rhino6 and only recently (last week) I’ve seen anything like this.

In any case, the artistic effect is less than impressing.

It would, of course, help if someone could actually provide a code snippet that shows this effect…

provide a code snippet that shows this effect…

But I just noticed another suspect - the Mesh Sphere. I just noticed that where ever Mesh Spheres are involved, they can suddenly stretch - between each other - or towards other Brep’s corners here and there. Screen capture from some seconds ago:

Fig. Some “balls” are Brep spheres, but the ones connected with spikes are Mesh Spheres. 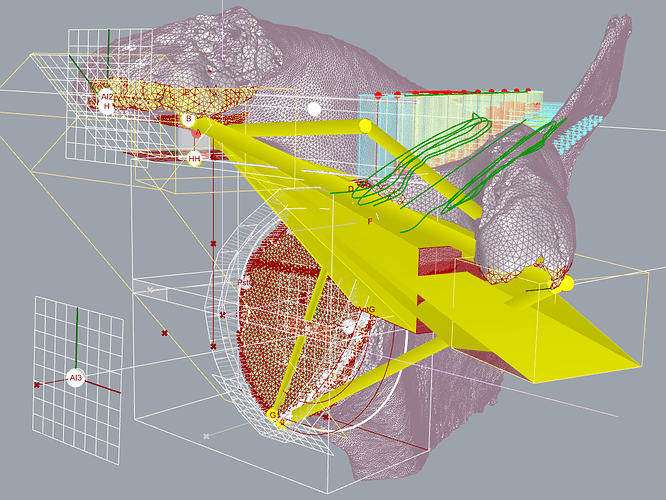 Edit: Hm, it could be a Mesh Pipe which isn’t updating correctly (perhaps not clearing up internal arrays etc). When I disabled it and reenabled it the problem in the nearest picture above went away:

I have run into this a little bit with some custom meshing components in R6. (gh python). It doesn’t happen all the time, it does seem to happen after running/having the definition open for a period of time…but in my case, recomputing the solution, (f5), a few times generally cleared it up. I can post an example a little later.

recomputing the solution, (f5), a few times generally cleared it up

I tried this too (F5) and in one case it kept toggling but didn’t disappear. It came back every odd refresh… This is also why I suspect that some GH (Mesh) component has an un-cleared list being resused while still containing “old” data.

I also tried replace the Custom Preview components (suspecting it was an internal caching problem in the component) but no go.

It may be that some mesh components are causing this (Sphere or Pipe, or both).

It would, of course, help if someone could actually provide a code snippet

Now I have a case which is dead simple with no custom code involved, only a Mesh, a Curve and a Mesh Plane. The mesh not even connected to any other component. Seems it has to do with “bad mesh” in that the mesh has two non-manifold edges.

Enable & Preview the components and press F5 until the shades starts falling.

Uploaded the file on rhino3d.com/upload

Now I have a case which is dead simple with no custom code involved, only a Mesh, a Curve and a Mesh Plane.

Hi Rolf,
I’ve looked at your file but didn’t see any spikes. Your curve component wasn’t internalized but I tried with a few different ones - all without anything bad happening to the mesh. Something more must be going on.

Hm. Sorry for the missing curve. However, I tried disconnecting the curve and the spikes still remains there, they only shift around a little, a bit like the northern lights. 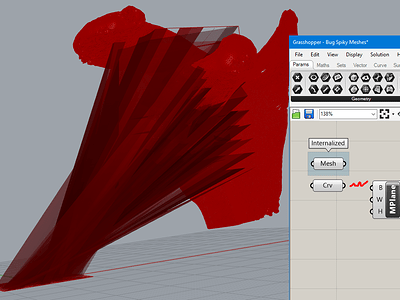 Same problem in all render modes, except for Raytraced: 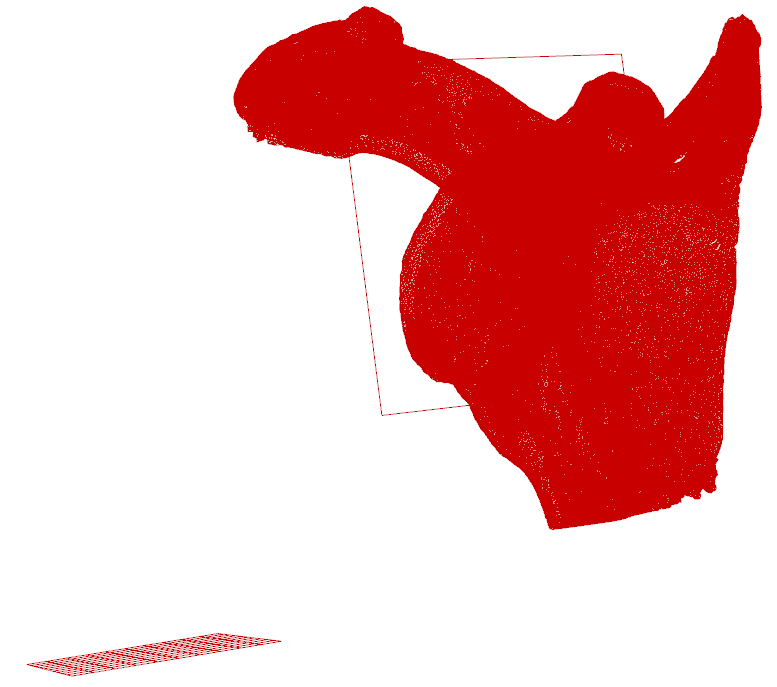 I have the latest drives for GTX 970 Asus Strix.

I found a little trick to hide this issue.
Try ctrl+m to close the preview of mesh edge.
Nevertheless, I do hope this issue can be clear out in near future.

Hope it works for you.

Hi guys,
I have similar problems with the Grasshopper mesh geometry preview.
Today, I noticed that in my last script the preview geometry is corrupt (many spikes in one direction, picture 02).
The geometry generated by the script is correct, in fact the baked object is correct (picture 01).
An other error it’s visible in rendered view where if I try to hide the geometry (picture 04) this remain visibile but not in shaded or wireframe view.

I tried many options but I could not solve the problem 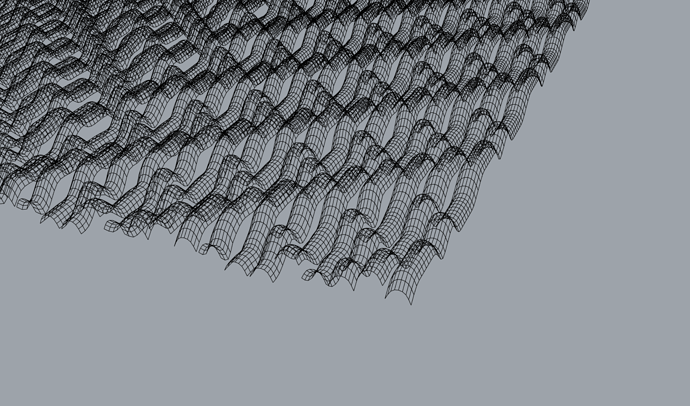 Happens a lot now with GH 1. For me doing a recompute once or twice seems to fix it (until it happens again usually after making some change to the mesh geometry) but it always bakes correctly.