Raytraced viewport sampling of 1000 took about 3min with GTX1070.
ViewCaptureToFile with same setting took about 5min for ~10percent so stopped.

Is this known issue?

1000 in the raytraced viewport then ViewCaptureToFile can save without wait.

I tried by pausing the raytraced viewport, and also setting sampling to low number so in background, still having problem with the output speed…
Below is with sampling set to 1 in viewport then ViewCaptureToFile.

Set the Sampling on the Viewport to 1, so raytrace should end quickly on the viewport. Then ViewCaptureToFile with below settings:
(18:56->19:16) After 20min still little more than half way done… 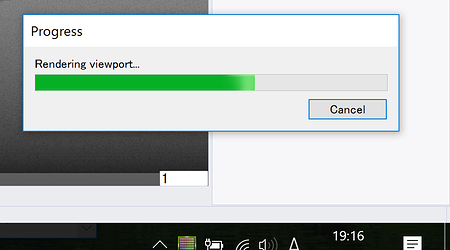 You are on a high-dpi screen right? In that case you probably see that the viewport renders at a lower resolution (larger pixel size). Capturing will ignore the pixel size, but render to the actual resolution. This will take longer.

Yes I’m on high-dpi screen 4K on 15inch, but viewport size seems same as the rendered image with ViewCaptureToFile since using display viewport dimensions(2958x1628)
The attached ViewCaptureToFile output is captured after doing 350 sampling in viewport and setting same 350 as capture option for number of passes.
Saved instantly.

Tried with 351 right after, and again slow compared to the viewport…
Not sure what I’m missing.
Actually crashed after fiddling some more…
Crashdump also attached.

Just a question…
When raytraced is set to perspective viewport and top viewport, does it impact to the performance of one that is on top? or for the CaptureViewToFile?

It may impact performance for all sessions - each view and running capture is a session conducting a render. The more you stress your GPU the more you notice it in overall performance across running sessions.

I have now looked at your crashdump, it looks like a crash with setting colors to the image. This crash happens during fiddling with the settings for ViewCaptureToFile, but you haven’t pressed OK yet. Correct?

I’ll see if chaging raytraced off for other views would change performance.

I have now looked at your crashdump, it looks like a crash with setting colors to the image. This crash happens during fiddling with the settings for ViewCaptureToFile, but you haven’t pressed OK yet. Correct?

When this crashed happened, Ok was pressed->so I guess rendering happening in the background and just cancelled the VIewCaptureToFile to close progress window.

Ah, so you pressed cancel in the progress dialog. I’ll try to reproduce.