Hello there! I’ve been trying for hours and there’s probably (hopefully) an easy solution for this, but I’m new to Grasshopper and I’m running out of ideas. So my problem is:
I have many circles with the same center point but different radii. Now I want to split those circles into three segments of equal size - but with a little bit of space between the different segments, so it would actually be six segments (big, small, big, small, big, small). I have found the points by intersecting the curves and the lines, but Shatter somehow doesn’t work. Also, the points somehow get projected symmetrically on the other side of the circle, even though the lines only intersect one side… why?
Does anybody have an idea how to do this? I’ve read about the SubCrv Component, but have no idea how to use it, especially since it’s multiple circles.

probably not very elegant, but working nonetheless. not sure how to handle those domains better.

You can use the Dash pattern component.

Thank you so much! This seems to work pretty well on circles

But I’ve been thinking: Is there maybe another way to split circles or other closed curves with a line/polyline/another curve? Maybe not by dividing it, but by shattering it somehow? F.e. would it be possible to split a hexagon with increasing fillet radius by a line like in my picture?

I’ve tried uploading my .gh file, but apparantly my internet is too slow, sorry! I’ll keep trying! Thank you again!

Dash works even better, thank you!

dash looks great! just in case though, here is the subCrv with an octagon / line intersections: 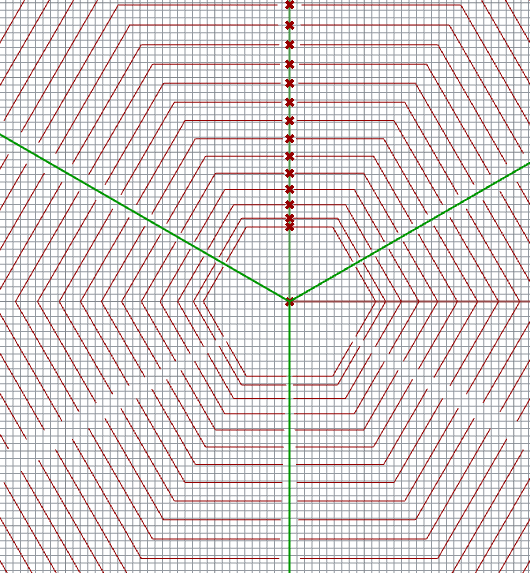 I only created the three green lines (the other one is the y-axis), but when I use it with shatter and SubCurve, there are suddenly three more lines, as if the closed curve needs symmetry - which would be alright if I tried to achieve an even number, but I actually want the hexagon to only be split into 3. Is there a way to prevent this from happening?

Always upload file to see what you did wrong.

Here it is - there is the problem with the unwanted sections (which happen when Curve from the Curve-Line-Component is set to Graft, but otherwise it doesn’t work at all?) and another problem with the Sub-Curve component, because suddenly it doesn’t follow the intersection anymore. I really don’t get it - ideas anyone?

This does exactly what I hoped for! Thanks so much!