Shuffling Text to get touch kerning

Strange one here because of the convulted way im going about getting to teh curves I guess,
We have an application to take text from a user, to a nominal size and font etc… for laser cutting.
-SO-
as we have no ability to apply kerning in rhino (that i am aware of) i need to accept the text, iterate through it on a per character basis then move each CHAR (or its curve representation) until its touching just touching its neighbour (with an insert tolerance) something like pictured except ONE item not 6 from the GH definition. 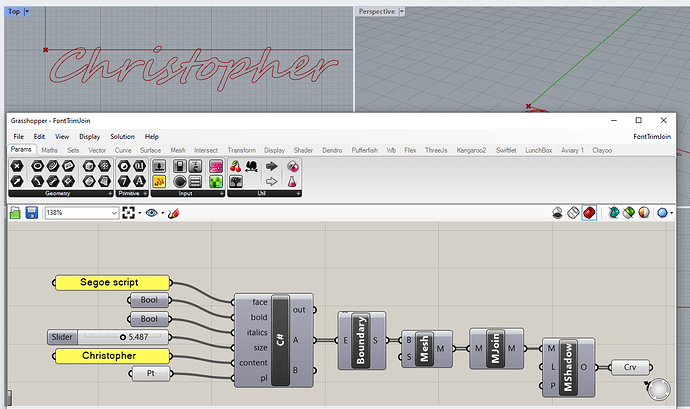 This all sounds complicated but essentially i need to get this as i have it in inkscape where you can see the two overlaps required. I do understand ill have to sacrifice things like the dorts on the i’s. (or in a later version, shuffle the dot down)

I assume an array of sorts after I get to the curves, but its the shuffling left bit im stuck at… I even tried a kangaroo def to try “shift” these in grasshopper but its clear a code solution is required.

Code i have so far (noting im jumping to boundary surfaces otherwise curve union throws away the holes in A and O etc. using the surfaces coverted to meshes once the overlap, i can meshoutline to get a proper set of curves back )

Why not import an SVG file you create in Inkscape? No code required and you’re using each software for what they are good at.

because my laser uses Rhino and Bamboo as its platform, and id like to automate it in one package.
we get a TONNE of these to do from a large retailer and i want to make it faster to use.

Solved in Grasshopper forum thanks!