Hi there,
I have an annoying problem when printing (or saving) to PDF. The issue doesn’t happen with every drawing, but when it does, it occurs when you select vector rather than raster output. Essentially, you can set a drawing up in the Print Preview window and if on the default raster setting, it will print out or save as a PDF as seen in the preview window. However, when you select Vector, although the Preview Windows shows the same layout, the PDF when opened has changed the positioning of the drawing, so rather than it being centralised within the A4 page, it’s aligned to the top left corner! Tried all sorts of the things in the print settings but to no avail. The best option I find is to select Viewport settings and try to set the drawing up as best as can be, which is far more time consuming than simply using the Window setting and Scaled to Fit.
Please help!
Thanks.

What version of Rhino for Mac are you using… 5.2? Can you also post the 3dm and a screenshot of your print settings?

Hi Brian, yes I’m using version 5.2. I’ll get back to you with the model and some screen shots.

This may be helpful:
http://wiki.mcneel.com/rhino/mac/rasterprintshifted

I think Canon only has two n’s…

Hi Brian,
I’ve attached/uploaded the 3DM file, along with a screen grab and some PDFs. I’ve set the print settings in Rhino to Scaled to fit and using the Window to create a centred print-out. Initially, I set the print settings to the Raster setting, and Saved as PDF which gave me a PDF the same as the preview. I then changed the settings to Vector and again saved as a PDF and this time the PDF is aligned to the the top left corner, despite being central in the Print Preview window.
Hope you can help.
Thanks,

Thanks, I see this shift too when using Print>Vector>PDF straight from the viewport. @dan do you know of this issue and do you think it’s print driver related?

The workaround I found was to make a Layout and print from that in Rhino for Mac 5.2.1. You’ll need to disable “Layout scaling” for the text in your title block first. Then make a layout by clicking Layouts in the top right of the interface. Due to how you already have the drawing in Top, I’d make a single detail Layout and double click in the detail to zoom in as needed. Then use the Print command while in the Layout window. Use Vector>save as PDF and the result shouldn’t be shifted.

do you know of this issue and do you think it’s print driver related?

I doubt that it is.

@BrianJ Were you able to reproduce this issue on your machine with the file provided?

@dan Yes, I was able to repro as long as I was printing directly from viewport rather than a layout.

@BrianJ I’ve tried reproducing this a number of ways, and can’t managed to. I wonder now if your suspicion that this is driver related was correct. It is Saving to PDF correctly for me (Rhinoceros 5.2.1, OS X 10.11.6, with HP Color LaserJet 4700 drivers). What are your drivers? 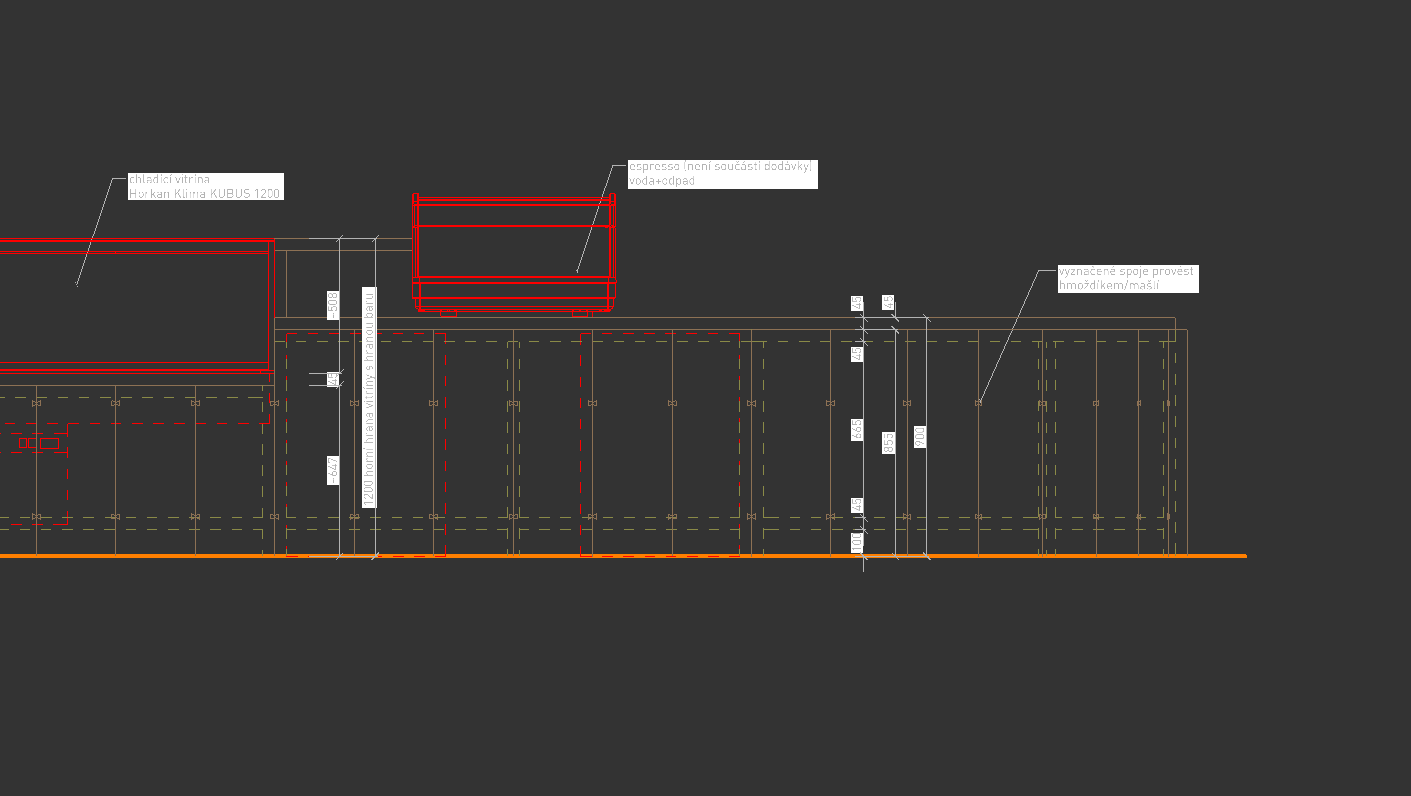 Problem with Text alignement in Rhino MAC Rhino for Mac

and same problem in latest WIP

Both Vector and Raster PDF prints from the 95Rev2016.3dm above print in the same position here now in Rhino for Mac 5.2.4.

@epiphany Is your printer a Lexmark too as in this post?

hi @BrianJ this has nothing to do with which sort of printer is installed. when you choose save as pdf which can also be done without having any printer installed it rearranges the text. os x uses an internal ps or ps to pdf writer for this. some fonts are less others severely moved. For example a web safe Arial gets shifted less but if Arial Black is used it moves it around more. i could not find any which does not get moved at all also using post script fonts versus TT fonts did not make a difference, i also tried changing the os x system language from german to american english and back… no difference. this has been for quite some time like that, and since exploding fonts also does not work for a long time now ( in the beginning it worked 6 years ago?) thats quite of a pain i believe.

i can remember when i still had the option to export about a year ago (currently i am still on evaluation because i am waiting for a proper version…) that illustrator files were even far more deranged. it not only made that vertically like in saving as pdf but also moved it horizontally also changing centered to left aligning… disastrous and also this worked far better in the beginning of the beta as i remember.

something is wrong with how it translates the position of text. here the screenshots taken, i made a small output size that you can see it already in the preview window - raster vs vector i used an arial on top and below some post script font… but anyway does not matter much they all get moved. 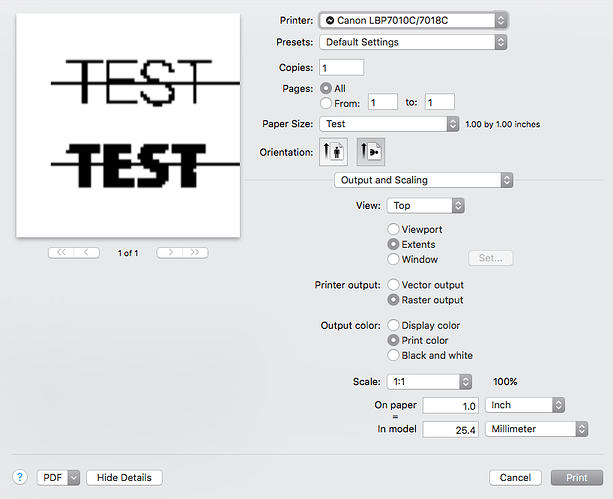 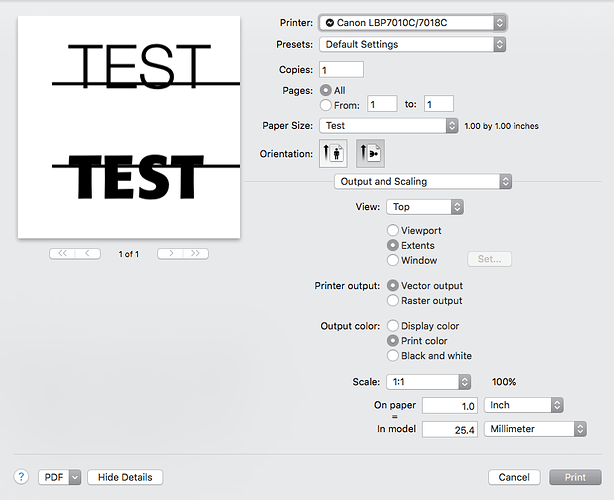 oh and fonts generally look bad when zoomed in that also has changed a couple of years ago, before it was smooth like it should, that also changed at about the same time when fonts lost the ability to be exploded. 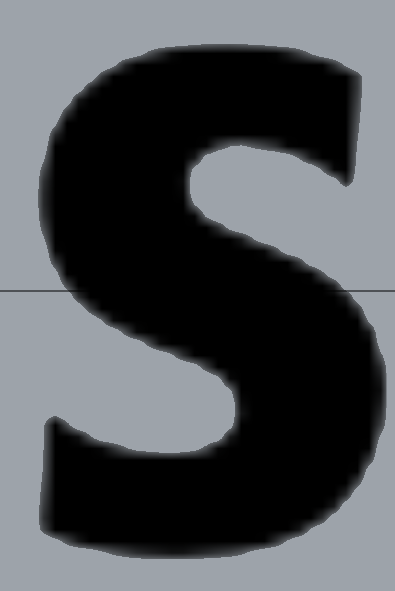 Thanks for your findings Richard. I’m not seeing the text offset here which is making it hard to file. There is an open issue about exploding annotations not working though http://mcneel.myjetbrains.com/youtrack/issue/MR-1195
I also found a closed issue about offset text that I just reconfirmed is fixed here in both the display and pdf print. http://mcneel.myjetbrains.com/youtrack/issue/MR-1869 In trying to narrow in on the system differences that are in play here, could you test the 3dm file on that report and see if it prints with an overlap? If not, can you upload your simple test 3dm?

well @BrianJ thanks for responding on this one, you dont have to look far to get something to analyze. even though you used a font which does not move much but look once more a little closer.

here a detail of your own output

and here the rest i have multiplied the upper and colored the lower one
precisely aligning them towards the outlined font.

again this is just a mild moving, if you use some other fonts it can lift off like Apollo 13 or sink like the Titanic… and if you use those anyhow it gets even worse

maybe it has to do with the display bitmaps of the fonts, they are pretty f*** up enough while in display.

about exploding annonations there seems to be a bit of a mess up, this one MR-2213 got closed recently maybe because its related? but its still does not work… pls get those things going i am trying to help as much as i can.