Hello folks,
is it feasible with any version of Rhino3D, to create a progressive SPIRAL ?

Hi Franz- the Pipe command will allow variable radii, I am not sure from your image where the spiral comes into it.

from the image, it looks like the pipe diameter stays the same and it’s the spiral’s diameter that’s changing?

if so, try drawing the centerline curve of that thing then use _Spiral -> Around Curve.

EDIT-
as in, i’m reading the picture as a variable spiral around a curve… which is then pipe_d
?

I am not sure from your image where the spiral comes into it.

Well.
What You see there, is a “Manmade Tornado”- chimney, in a tropical lagoon.
According to my Patent
http://www.directupload.net/file/d/3942/b63n3syi_pdf.htm

Anyway. The updraft of that “Tornado-Spiral” depens on th volume of the Torus’ it’s formed of.
In oder to withstands crosswinds at higher altitudes, a greater updraft is deireable there… hope I somehow could bring this across.

But that’s no big deal, even my one & only (so far) RHINO1.0 can do that, means to allow for a bigger diameter of the pipe further up the spral.

What version of RHINO did you use ?

options are also available within the command to set the number of turns and direction of spiral.

All the above done… but that’s the result: 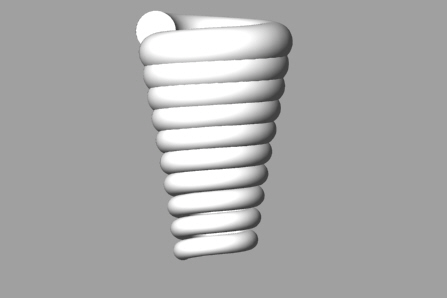 I call it “Spiral meltdown.”

What I need, is a progressive Spiral, that allows for a bigger diameter of the pipe in it’s “upper” part, without “melting” it into the “torus”, that’s below it.

What I need, is a progressive Spiral, that allows for a bigger diameter of the pipe in it’s “upper” part, without “melting” it into the “torus”, that’s below it.

that’s a matter of choosing the right pipe diameter on each end of the spiral… in your picture, it looks like the starting diameter is too small and the end diameter is too large…
i can’t think of a super simple way to accomplish it right now but i’ll think about it some…
@anybodyElse – maybe someone else has already thought about it?

Well… YES.
Or the other way round:
The starting diameter is quite right… meaning that…
the “pipe”, which is in real life supposed to be a torus, sheetmetal wrapped around that Spiral. curve…which makes it a “balloon”, that’s filled with Hydrogen… is an “integer body”.

Well… YES.
Or the other way round:
The starting diameter is quite right

yeah, that’s possible too in which case the spiral is spiraling at the wrong pitch…
either way, there’s a bit of a complex maths thing going on in order to get the variable spiral pitch&turns to coincide with the variable pipe diameter.

it’s possible there’s a little trick to getting all these things to line up properly but i haven’t had the ah_ha moment yet.

but i haven’t had the ah_ha moment yet.

Is that what you want?
Vittorio

Is that what you want?

i think so except there would be no spaces (or overlaps) in between the pipe revolutions
?

yours looks like it’s on the right track though… or the spacing looks mostly consistent… how did you do that?

And YESSIR, that’s exactly what I want !!

Now HOW did You do that, and what Version of RHINO ??

If i use pipe the result is the picture below

Thank you very much for Your eplanation, and also for the magnificent manner in which You visualised it.

if the spiral doesn’t vary in pitch, i suppose an easy way to do it would be like the following.

draw a line from the endpoints of the spiral to the perpendicular point of the next rotation:

using _Pipe, set the centerpoint on the ends of the pipe and the radius at the midpoint of the lines drawn in the last step:

Hi Vittorio
What commands did you use to make the spiral with variable pitch, as you show in the video ?
I would like to spiral around this surface.

I think I found the command: InterpCrvOnSrf

But I couldnt pull the curve around, outside the surface, as you do in the video - I had to rotate the view, while pulling the curve. Thank god I have a 3Dconnexion mouse !!