I wrote an email to tech.eu@mcneel.com but I was told to create a forum post with my issue, so here we go:

I am evaluating the Rhino 7 now and I have run into one major problem - poor performance with relatively small point cloud. It is especially problematic for me because my company specializes in delivering data from point cloud.

I was told that in Rhino there was no software limit for models and point clouds and the only limitation is my computer, which I consider to be quite powerful. Its specification is as follows: 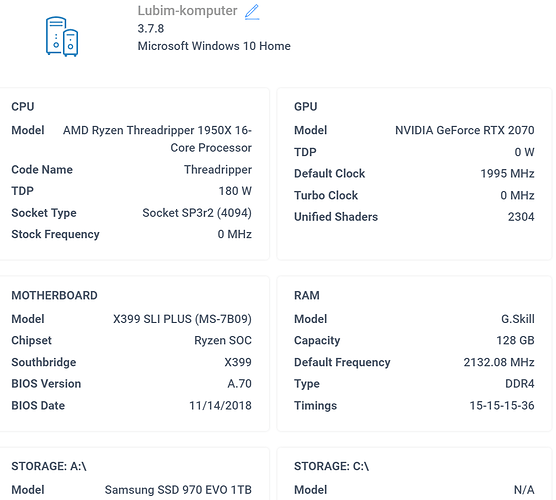 Unfortunately, after importing point cloud from a laser scanner, Rhino starts to freeze/lag. While Revit and Recap handle the original point cloud without problems, Rhino has trouble working with the resampled cloud.

In my email to tech support, I also shared a link with point clouds but I don’t want to do this in open forum. If someone from McNeel would like to investigate the problem I can share it again.

I would be grateful for any help with my problems. So far, I find Rhino to be a really good piece of software, but this bottleneck with point clouds may shade all other benefits since it is critical for my business.

Just linking some topics that may be pertinent

@dale, @stevebaer, I imported 33 pointclouds created by Lidar scans of a street and combined them into one cloud with 465.8M pts. If I start slowly when rotating the view, then the response gradually picks up speed while still showing the whole cloud but then after very much rotation, the view shifts to showing only the bounding-box which allows for more rapid movement. After Rhino has shifted to bBox view once, then it immediately jumps back to the bBox view for all subsequent rotations no mat…

Rhino Pointcloud Import Not Working as Expected Rhino for Windows

@dale, @stevebaer, The first time I import a 9.5 GB Pointcloud in PLY format that contains points, normals, colors and intensities I get the following: [image] This has many points missing in the lower right. When I check properties, it says the cloud has 227,252,794 pts which is correct. If I leave this on the screen and do the import again, then I get the expected result (the cloud above was hidden when capturing this picture): [image] If I unhide everything and select everything, Rhin…

Thank you for your answer and the links you provided. I read them and it looks promising. I will run some test according to the new information I obtained from these topics and come back with new questions.

I think you may be able to get some good info / discussion going with Mr @Terry_Chappell as well.