Orient perpendicular to another curve

I’m trying to produce a pattern facade of wood planks. I manage to do an array along a curve that I modify using attractor. BUT, now the planks are oriented parallel to the curve (the blue lines) and I want them to stay perpendicular to the facade behind (the red lines).

Do you guys have any suggestions?

now the planks are oriented parallel to the curve (the blue lines) and I want them to stay perpendicular to the facade behind (the red lines).

Naughty, not attaching your file. But this challenge is something I already figured out with help from here, so I’ll attach an example.

FYI, had you attached your file it would be less work for you because you’d get specific help.

See my example though using adjust plane, one of multiple methods that likely would work. 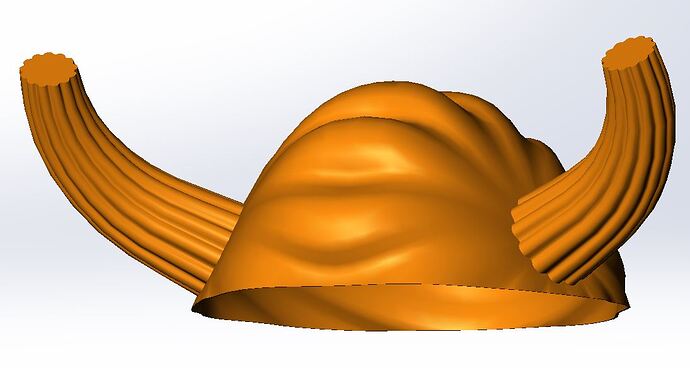 I managed to explode the curve and then use every segment individually.
But I’ve only been able to did on one side…

Something like this, I suppose, per side, but as mentioned you’ll need to decide what to do at the corners. 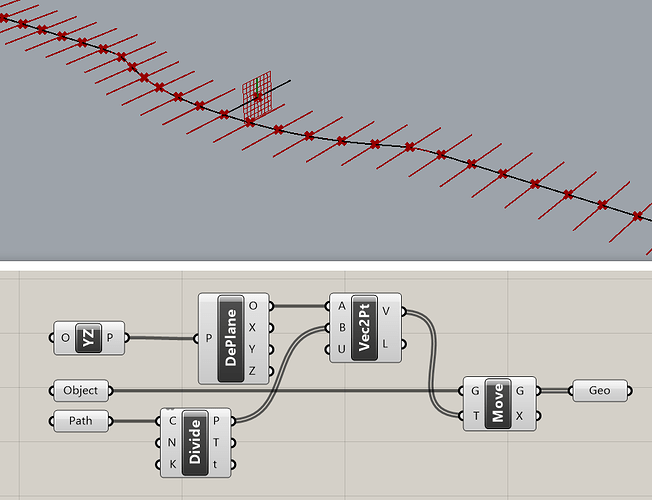 Ouuuh ! Seems about what I try to do, you think that since I exploded the curve in 3 segments it could be done ?

You could join the curves then divide that.

Sorry, I forgot about the files, here they are now.
I will look at your exemple. Seems that you needed to sweep and keep your form parallel along the curve am I right?

Sweep can work also, though I used a loft in my example. Loft can give you different control than sweep, which is why I chose loft in this case.

The white group is an intervention between HFrame and Rectangle to realign the planes (HFrames) on the “south” and “east” curves while leaving those on the rounded corner alone.

Oh god ! Thank you so much Joseph!

I threw away some unused code and applied the same fix to the southwest corner as well.

I looked at what you send me and I need to had a third curve on the northwest corner. But now it seems that the rectangles cannot align anymore. Is this because the curve is now 3 side rather than 2?

I looked at what you send me and I need to had a third curve on the northwest corner. But now it seems that the rectangles cannot align anymore. Is this because the curve is now 3 side rather than 2?

Thanks a lot Joseph!

I was also wondering if my spacing strategy between rectangles is right? I kinda set attractors that I chose on the curve and I tried to pull rectangles away from it in a gradient way. But it seems that I can’t specify a range of distances…like if I would like to have minimum of 4" and a maximum of 12". I tried to remap but it seems like the graph or another parameter interferes with it?

Any advice on that?
Thank you

First, there is an error in the model I posted earlier. The Or component in the white group needs a third input to correctly handle the third curve, East Crv. Do you see why? 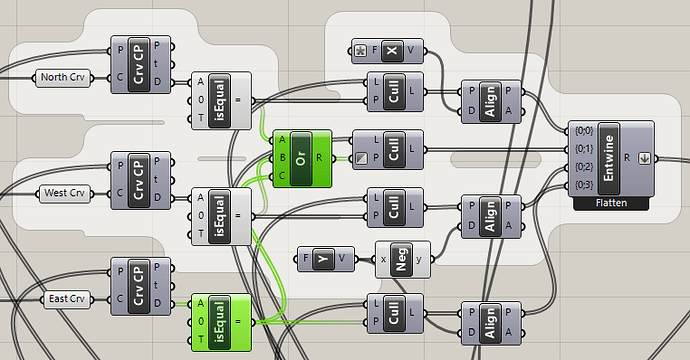 Second, I’d be more inclined to address the spacing issue if you understood what I did a few days ago well enough to adapt it to the “north wall”. It’s discouraging that you didn’t.

Third, the easy answer to spacing is don’t mess with it at all.

I had a hard time trying to understand your alignment process that you send me earlier this week. BUT, I manage to analyse it and found a second method to do it by exploding the curves and than align my rectangles on the base ones by rotating their origin.

I also manage to find a way to speficy a domain range of distance along the curve inside the array. Instead of using kind of attractors, it was easier to take closest rectangle from the façade and force them to be thighter together.

Anyway,
Thanks for your help