Need some help modeling from a Lines Plan

I need to model a ship hull from a lines plan. Here is what I’ve managed to reconstruct from the 2D drawing:

As you can see, I have all three views; stations, buttocks and plan, all as it should be. Here is my issue - the 2D drawings were hand drawn, originally, and then digitized, so there is enough error such that the lines from each view do not properly intersect. I have tried lofting, curve network, even t-splines and get nothing but a confused mess wherever I turn.

I am at a loss. Whatever I try seems to give me too many control points, or too few. I am looking for a proper workflow to complete this task.

Any and all suggestions as to how to approach this task are greatly appreciated.

I’m doing just the same routine right now on a new project. Another guy had tried lofting from the sections with poor results. I generally create a surface and point edit it to match the 3d lines like you have as close as I can. I will try and document the process as I go and share with you. Good that you caught me just as I am starting this project.

I have tried that, but what happens is the resulting surfaces, when I snap the control points onto the lines plan, they don’t have enough influence, as it were, and the shape is less defined, and shrunken, if you understand what I mean. In particular, the bulbous bow is giving me fits, and making it’s shape smoothly transition into the rest of the hull.

Thank you for the reply; I look forward to any and all assistance with this you can share.

You understand that the surface control points do not lie on the surface. Theycannot simply snap to the 2d lines.

Absolutely I do, but I am not sure how else to approach it. when I try to manually adjust them by dragging to make the surface reach the proper position, I get an unfaired mess of a wrinkly hull. And when I try to reduce control points by rebuilding the curves, I lose position definition, and get too simple of a shape. I hope this is making sense.

There is no EASY button for this sort of stuff. I have a full day ahead of me tomorrow doing just this sort of thing and will try and keep you posted as I go through my methodology.

In our institute we also don’t have an easy thing for this, it is manual control point editing until the hull shape matches the reference lines plan. The CAD engineers are very skilled to do this quickly, supported by some plug-in functionality to help them along and keep the overview.

My advice would be to not focus on getting a loft, sweep, or other curve-to-surface command to work, but to fair the surface by hand. Start with a surface with few control points, drag it into an approximate shape, add control points using InsertKnot and approximate some more.

The point editing tools like SetPt and MoveUVN are very useful in this context, as well as nudging in UVN (see Options). Also, create keyboard shortcuts for AddNextU, NextU, PrevU and AddNextV, NextV and PrevV to quickly navigate the control points.

Lastly, it looks like your hull is symmetrical around the centre plane: you only need to model half a ship and then mirror it.

You may also want to consider modeling the bulb as a separate surface than the rest of the hull.

Thanks for the tips, I will certainly look into them. Rhino is so vast, I’ve been using it for years and every day I still feel like a novice. Just for curiosity’s sake, you mentioned plugins, what are they?

Third party apps that work inside rhino. Check out food4rhino.com. I guess I budded in on conversation. Just thought to help.
There are rendering , architectual,marine,auto. , ones to create specific geometry, T-splines,shape modeling, the list goes on. They work more specific to a persons needs in Rhino.
How did I do ? Good weekend. Mark

Lol, no I know what plugins are, the previous poster mentioned plugins were used by the CAD engineers and I was wondering which specific ones they use. I will have a look at food4rhino.

They are in-house plug-ins that display interactive lines plans, compute hydrostatics, display curvature, help in navigating the control points, etc. Not available on food4rhino though…

Similar to what others have mentioned, I use the following general process.

Ignore the buttocks and waterlines.
Use only a few of the frames/sections.
Model the canoe body and bulb separately. Trim them together later.
Model above the sheer and trim it later in profile.
Model half the hull, split along centreline.
Model aft of the transom and trim in profile later.
If you need the very front of the bow, do this later with something like a networksrf or a blendsrf.
I try to avoid point editing a surface to fit the curves. You should be able to get a decent surface with a loft of the sections from here to here, ignoring the bulb.

Pasted image1532×746 52.9 KB
Trial and error approach. Check deviation from the original curves by creating sections through the surface and use deviation.

Hope this is helpful.

If using Nick’s great tips above, it might be a good plan to rebuild the lofted surface if it originates from existing sections, which can end up with lots of control points. On a large hull like the example, accepting a resulting deviation of just a few mm can make a huge difference to the control point grid.

To proceed from this perspective you could use this usefull method: 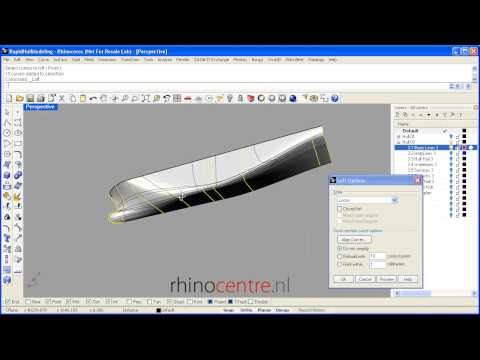 I feel your pain, it’s a trial and error approach for sure. Ncik and BrianM’s suggestions are spot on. I created a galleon hull for a client last year and then a Viking ship hull for another client… It turned out that less is more when it comes to the sectional details and rebuilding the surfaces helps a great deal. Once you start to increase the detail and control points it becomes cumbersome and you end up with dents/dimples in the hull.

I rebuilt a lot of the curves and and tweaked them using CurvatureAnalysis with a bit of Fairing and Smoothing to stop the shape from deforming.

Try to work with History switched on too so you can make changes on the fly.

I have some hulls to do as well. I have been using the loft for as few stations as I can get away with. I would like to give the surface edit method a try.
Do you use loft to get your first surface then point edit? Or start with a flat plane surface and sort of drag it on to the lines?
It’s probably a silly question, I understand that it’s a case of adding knots to bring it in to shape manually. I am more asking what’s the best way to get the starting surface.
On a side note I did an apprenticeship as a shipwright. It’s much easier hand you just cut the bits of that don’t look good.

I use loft but with history enabled. I try to work with curves that are longer/extended than what I need so that I can trim later. Fewer control curves for lofting will give you the best result.

Try using the curve analysis tool too, to ensure that the curves don’t have any nasty kinks in them. To iron them out, use the fair command or smooth or better still rebuild the curve.

You’ll find lofting with curves which have been rebuilt with the same number of control points will give you a much cleaner surface too.

Try rebuilding surfaces once you have the basics of what you need.

One of the most useful tools in this instance is also the Gumball. When moving things try to use the arrow commands on the gimbal so that you can move them by a set distance (Alt and click to copy and move). This way you can duplicate several variances within modelling space, try not to rely on undo so much. This way you can keep a running storyboard of your work and you can move copy things by a known factor up down left or right without mismatching overlaid components by sloppy snap commands etc. If it gets too busy do an incremental save and weed out what you don’t need - that way you can always go back to find stuff you’d used to build the final model. There’s nothing worse than getting so far and then realising you’ve saved over something and you can’t undo it.

Thanks for the top tips Andy. I will give that a try. I don’t know way I did not think of making a ref set of stations and a loft with history set. I do rebuild my curves, all to the same number of points but I also never thought of extending them to trim later. Great help thanks