Could the average function have a slider attached so that you could dial in which surface edges have the most ‘power’? In cases where you want something in between average. Just for that slight option of control where you don’t want 50% / 50%, if that makes sense. 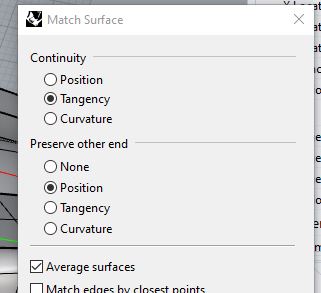 That would help a lot. It have been requested multiple times in the past and I’m glad that now it’s officially considered for future implementation.

Along with a slider, it would be nice to also be able to write an exact number just in case that other surfaces need to repeat the same custom ratio (just like the sliders and numerical boxes of “Blend surface”).
Also, I think that it will be even better if there are two sliders and two numerical boxes to be able to set the ratio for the start and end of the averaged surfaces. For example, the start could be set to 50% (perfectly average), while the end could be set to 0% (second surface remains unchanged there while the first surface is fully matched to it in that particular area).

the ratio for the start and end of the averaged surfaces

As in different amounts of averaging along an edge? I mean, it’s interesting, but I could see the view from the camp of it overcomplicating things too, to be fair.

I’ve always wondered whether a TestMatchSrfAdvanced would settle that argument though… just dump a load of the unwieldy and specific stuff into a heavy UI and let people who want to figure it out themselves.

Yes, it should blend from the amount of the start to the amount of the end along the matched edges. So, if the start ratio is set to 100% (the start of the 2nd surface edge fully affects the start of the first surface), and the end ratio is set to 50% (both surface edges are averaged normally), then the middle between both matched edges gets about 75% ratio (the 2nd edge there is changed by 25%, while the 1st edge is changes 75%, or 3 times more). That would be perfect for many architectural and industrial design projects where the intent is to have a crease line that smoothly disappears into the adjacent surfaces.

It’s something I struggle to visualise. But sure sounds cool.

Would be interesting if something similar was capable of happening in rhino.

It should do something similar to this: