I’ve been using Rhino two or three years now but I seem to always find new things to try and fail at. In this file table-leg-0321feb-play.3dm (519.1 KB) there is a curve of a table leg that I will make in steel. One portion of the curve is not in the same plane as the other. I want to show this as one 5/8" square bar that has been curved to this shape. So I joined all the segments of my curves and made a 5/8" square box at the bottom end for a cross section. But when I sweep one rail using the curve as the rail, I end up with “funny” bits where the individual curves were joined. Admittedly there look like some kinks at those points. See this filetable-leg-0321feb-square-bar.3dm (1.1 MB)
So the question is either have I done something fundamentally wrong or is there a way for me to smooth the joins? I’ve tried moving control points around to get rid of the humps, but seems like there ought to be a better way and I’m willing to learn. If I haven’t been clear, ask me questions.
thanks,
Joe 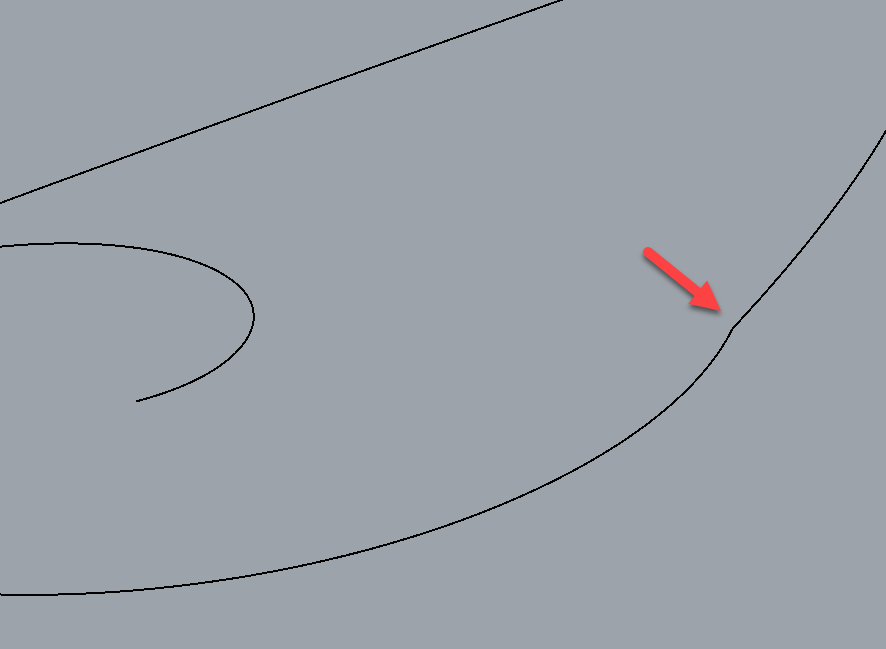 image886×649 7.59 KB
The easy way out is to Rebuild the curve with say 150 points and use that - the Sweep will want to be ‘Roadlike’ with the axis parallel to World Y

The longer and probably better way is to clean up that curve so it is really how you want it.

You’ll also want to align that square section more perp to the path - to do that set a Cplane to the end of the curve, (CPlane > Curve option, End OSnap) then use Rectangle with the Center option.

image1389×899 303 KB
Is this good for you?
As pascal catches me you join two curves that have no tangent or curvature continuity.
Then you use too many control points and the cross-section intersects in some points. I solve this just by apply smooth command in the original curve and after that rebuild in a degree 3 curve with the half control points.
ar00302 (Ar00302) February 4, 2021, 7:22pm #4

table-leg-.3dm (295.7 KB)
Also, I suggest make a cplane perpendicular to the curve start and dray there the profile.

Thanks, guys. I’m trying to understand. As I said I knew I had some kinks. But I didn’t understand how to get rid of them. I thought I could use the control points. Is there a command to make the tangents match up at the junction? I looked for some kind of smoothing command, but when I type in smooth it suggests things that don’t seem to apply. I tried simplify and that didn’t seem to do anything. I started over and built my curves more smoothly and that helped till I got to a tight scroll. When I tried ‘roadlike’ it went all twisty on me. Maybe I didn’t have the axis set right.

Hi Joe - if you Explode the curve and use the Match command (for tangency in this case) you can true up the segments. But I might also consider bridging those kinks with G2 blend curves. See GCon for testing curve continuity.

Thankyou, Pascal. I always seem to be behind the curve (no pun intended) on knowing where to find tutorial stuff and I appreciate you pointing me to the curve continuity pages. There’s lots of other subjects in that level 2 training that I want to study.
Making a CPlane perpendicular to the end of the curve in order to make the square cross section was especially helpful. Thanks again.