Hello!
Is it possible to insert a control point directly on a surface’s edge?
My workflow for now: duplicate the surface’s border, delete the surface, insert a point on this curve using InsertControlPoint, and creating a planar surface from the curve again.
Maybe there’s a shorter way. (InsertControlPoint applied to the surface directly does not what I’m looking for.)
Thanks a lot!
Best regards
Eugen

It is difficult to understand what you want. Can you provide an illustration and a .3dm file with the a before and after example? What command are you using to create the planar surfaces? Are the surfaces trimmed or untrimmed? 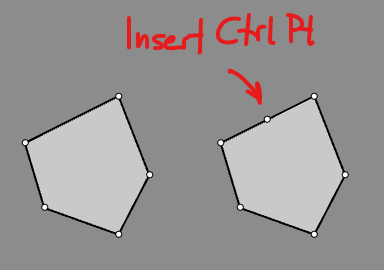 How did you obtain the points in the image. If you used SolidPtOn then those points are the “grips” for the corners. They have similarities with control points but are not control points. Or are those the control points for a polyline which was used to create the trimmed surface, possibly using PlanarSrf?

Do you have experience with other software and assume Rhino is similar?

Thanks for the reply!
You are right - the surface was created with PlanarSrf from some curve, so it’s a rectangular surface with a trim. The points in fact are Solid Points, sorry for the unprecise terms!
What I would like to do in other/better words is insert an actual Control Point on the trim curve (didn’t think of that before).

The image is a cheat, to illustrate the wish - the points on the left are real Solid Points, the right ones the Control Points from the curve I applied ‘PlanarSrf’ onto, with one extra point.

Edit: the unpercise term came from the fact that it is possible to select trimmed surface’s ‘Edges’ - where the point should be put onto.

(And no, I don’t use any other Nurbs modeling software. Rhino for 5 years… Maybe Revit, but it’s mass modelling tools are very strange.)

Solid points are created by Rhino based on the geometry. The user cannot insert solid points. You could try having History on when using PlanarSrf. Then moving control points of the input planar curve to PlanarSrf will result in the surface updating (as long as the input curve remains planar).

Thanks, that would work.

One last try, with the best wording I can think of: is it possible to insert points on trim curves directly?
No, right? 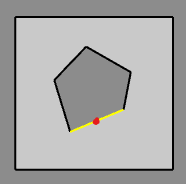 One last try, with the best wording I can think of: is it possible to insert points on trim curves directly?

Try using SplitEdge. That should create a solid point at the split.

That’s it! Thank you very much!