How to trim three curves by each other?

I cannot find a proper method in RhinoCommon to do so.

There are two overloads (three but the first do exactly the same thing so…):

Now, using the second one is a no-go, as I cannot tell in advance which side should be removed.
With the second one I reach an impasse.
In order to get the domain which should be kept. I need the points of intersection and use it to find the parameter on the curve. I need to intersect the curves, but there’s no such method, or at least I couldn’t find any. I didn’t find also under Point3d class a method to create a point from intersection.

So, what is the way to do that then?

For multiple curves i always use intersections and split the curves by them, discarding the parts i don’t need in the process. Trim in my understanding is only for simple cases.

Intersections in Rhinocommon have their own Namespace.

Intersections in Rhinocommon have their own Namespace.

Can you show an example of the situation you are trying to solve? 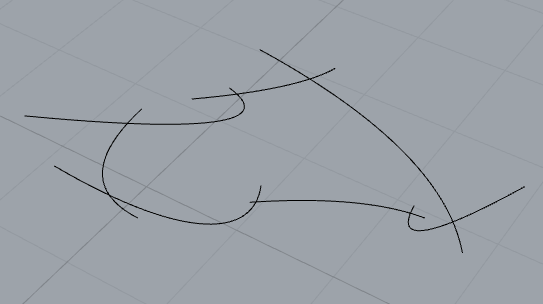 So the hard way it is. If you have questions feel free to ask

No problem, I think you gave me what I needed, thanks.

Why is it an event?

Doesn’t look like an even looking at the way it is called.

This is what I developed awhile back…

Well, intersections are complicated. Two curves can have multiple intersections and some parts could overlap. So you need to have an output for each “intersection event”. Yes, given that there are also “events” and an “event watcher” which are not at all the same thing, the terminology is perhaps poorly chosen. One could call the intersection instances, but that might get confused with other uses of “instance”.

One could call the intersection instances, but that might get confused with other uses of “instance”

I think Intersection is quite enough

no event, no instance.

Thanks for sharing the script @Helvetosaur,

I mark the thread as solved, but I still need to consume what is happenning in there.

Why are you creating a polylinecurve and scaling a plane?

I think Intersection is quite enough

no event, no instance.

So let’s say curve A intersects curve B three times, two of them at a point and one of them as an overlap. That will generate 3 “intersection events” - how do you want to name them?

three intersections of different types, no events, event is something connected with time. I don’t see time variable here.

Indeed, the search for proper terminology to describe this set of circumstances is an adventure. Perhaps I should say “was” since I’m pretty sure you aren’t the first to confront it. In fact, I suspect the CAD pioneers and/or the Rhino developers faced it early on and “events” is what they came up with. Despite the thoughts you may have at those times when the way they chose to do things doesn’t seem optimal, they are probably all at least as smart as you and I. I, at least, am delighted they came up with a way to talk about the multiple intersection situation and am perfectly delighted to accept their terminology. Saves me from having to invent it. Unfortunately, it does fall into the category of things in Rhino that I must adjust my thinking to rather than things that surprise and delight me because they are just as I would intuitively expect them to be.

Why are you creating a polylinecurve and scaling a plane?

Well, what would be your best guess here?

lol @AlW, it’s been a while since I joined the forum I am well aware that McNeel developers are not incompetent. Besides

who am I to say anything about developing stuff, I’m a total noob. I merely said it’s totally confusing.

I am also well aware they are not going to change it. It makes no sense giving the fact that all previously created script and plugins will stop working.

I am a forthright person, if you haven’t noticed

Well, what would be your best guess here?

I guess you extend the surface to later trim it with the trimmed curves. It’s just quite different from my approach, what I did so far.

Anyways, thanks, I’ll figure it out.

What would the analogy of a curve-curve overlap