How do i create this into a vase by adding a thickness?

Having a hard time creating a simple thickness for this to make it into a vase to be 3D printed. Using ExtrudeSrf doesn’t seem to have the options to make the extrusions even and in one direction. Please help! Thank you in advance! 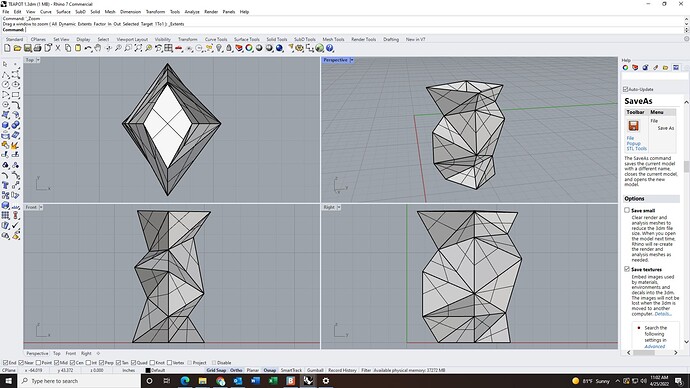 Hi @Erica_Halpern
Try using Cap to close the top and then use Shell To add the desired thickness.
HTH, Jakob

Since you probably wanna gonna 3D print this vase, a safe way to get a clean offset is by using TriRemesh and Weaverbird to thicken the mesh.

@Normand Thank you! I did that but it says “shell result is not solid”. Online it says " Shell only operates on simple, solid, manifold polysurfaces.

The OffsetSrf command copies a surface or polysurface so that locations on the copied surface are the same specified distance from the original surface.

The first problem is that your top edge is not planar so it does not cap just like that.

Second problem: I’d say its rather unlikely that the many triangles are going to form a closed shell so I suggested the mesh way…

Finally you could have probably saved yourself some time creating all those triangles. Let’s say you want to edit the outside look of your vase… Joining mesh faces into one single mesh leaves 1 vertice at the corner of your surfaces. So just one vertice you need to select to move a corner… Editing the surfaces or polysurfaces requires selecting more than one control point at the corners and is definitely more complicated.

@martinsiegrist Thank you for the insight! We don’t have Grasshopper yet but we are about to purchase it. When you refer to the top edge not being planar, what do you mean by that? It is flat to the Y axis right? Is that planar?
Are you saying that I should join the mesh faces? How do I do that?
Is there anyway to add a nice thickness to this in Rhino?
I see that OffsetSrf has a few issues and this is one of them. See this link.

The OffsetSrf command copies a surface or polysurface so that locations on the copied surface are the same specified distance from the original surface.

We don’t have Grasshopper yet but we are about to purchase it.

try entering grasshopper into the commandline, does that not work? Grasshopper comes with Rhino preinstalled since i believe Rhino 5

It’s not off by much but the top edge is not planar. This is a front view with two corners connected with a line:

Instead of using Grasshopper you can create a Mesh from Nurbs using the _Mesh command, then _AddNgonsToMesh and finally _OffsetMesh for the thickness

@martinsiegrist I fixed the non planar top. How is this? Does this help to shell it?
FACETED VASE.3dm (128.1 KB)

@martinsiegrist THANK YOU SOO MUCH!!! I followed all your commands and they all worked! Even treaked the bottom. Now how do I close up the top?? The new model mesh I made was planar but the Offsetmesh was not planar. How do I close that off to make a solid vase? 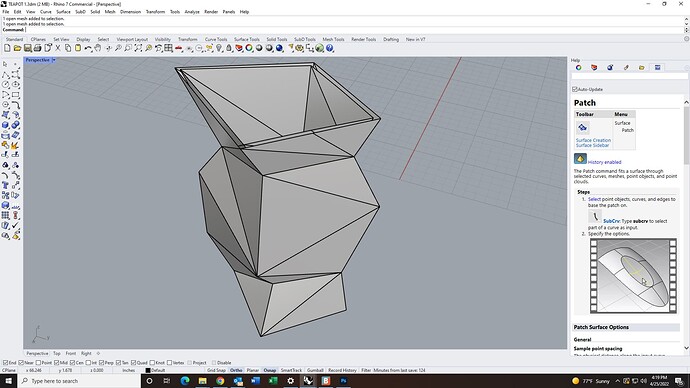 In the mesh command you need to look at the options in the command line. Solid needs to be set to yes. The result is a closed mesh.

Thank you so much @martinsiegrist !!!