I have created a gh program that results in the boolean intersections between one brep and many others, potentially several thousand. The first brep is scaled using a knob, but as soon as the value starts to change, recalculation starts and the control becomes unresponsive. Can I decouple the control sufficiently to allow it to reach a steady state at my new value before recalculation kicks in down the line?

can you put it through a loop (anemone or other) that does one at a time? 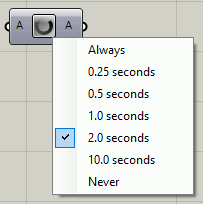 Definitively Data Dam, as @Joseph_Oster said.
Try also the “Never” option, so you’ll always have to manually “pass” the data.

Thank guys, @Joseph_Oster especially. I can now tweak the setting. Sadly that just demonstrates that the tool is too slow (almost all due to the amount of brep slicing and boolean intersectioning going on) so I need to try a different paradigm. Fortunately I have a Plan B, and a Plan C…

There is one thing you need to take note when using data dams. Even if they are set to Never they are calculated when you open (re-open) a gh definition. This leads to a long wait (depending on the definition).

Along with data dams I use a python script with a Togglethat my wire goes through before entering the data dam. This script sets the output of my ghpython, respectively the input of the datadam to Null.

I turn this off when saving the gh file.

I use this wherever I have a bottle-neck in my definition. Gradually turning them on. 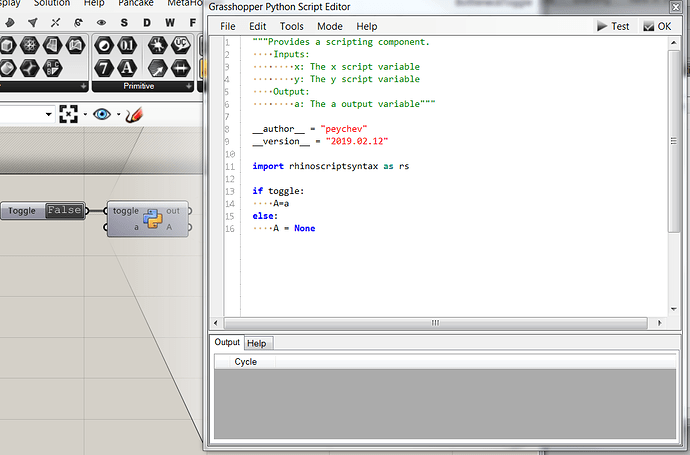 Good observation about data dams passing data when you first open a GH file (fail!), but you don’t need Python since Stream Gate does the same thing (and more):

Yes, it would be nice to have a ‘trigger’ input for Data Dam. But I don’t agree that either of the proposals in the thread you refer to are a solution. The one in testDataDam.gh using VB Script appears to trigger all data dams? The one using Metahopper appears to be more selective using its “Get objects in group” feature but it’s a little obscure. The connection is only “explicit” in the sense that Data Dam and ObjFromGroup (and only those two components?) must be in the same group, a condit…

Yes would be nice if this behavior was changed @DavidRutten