Free-form bricks in a modern vault 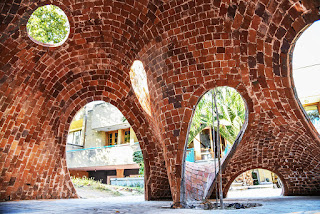 ADAPt team used RhinoVAULT to generate the 3D form from their plan. Each iteration took them closer and closer to reaching a vertical and horizontal equilibrium in the forces acting on the vault, until they reached the final stable structure.

Both Karamba and Grasshopper were used to simulate wind force and material properties.

More details in the ArchDaily article…