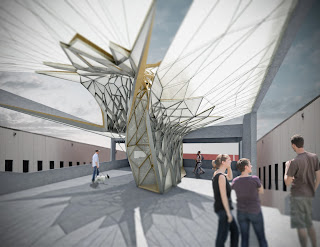 The Rooftop Competitoin challenged competition entrants to design and build a temporary outdoor installation that provides shade for events and student use on the third-floor terrace of the Paul L. Cejas School of Architecture building.

The winners of the Rooftop Competition are two Assistant Professors from The University of Texas School of Architecture, Kory Bieg (OTA+) and Clay Odom (studioMODO).

Bieg and Odom’s winning project is a canopy called “Lumifoil.” It is a collaboration between OTA+ and Studio Modo, and the winning entry for the FIU Emerging Architect’s Initiative Rooftop Canopy Competition. It will be installed at FIU in January 2016.

The project introduces a new “intrusion” at the heart of what Tschumi coined the “red generator,” thereby heeding his call for provocation in the form of an architectural intervention.

It weaves into the existing fabric of the space by exposing one potential architectural event established by the form of the building itself, and lies somewhere near what Tschumi calls “the rotten point, the very point that taboos and culture have always rejected.” It is parametric in its fabrication agency, but formal in its design conception. It forms a wall to sequester quasi-separate event spaces, and is an event in and of itself. It is uncomfortable and provides comfort.

“We used mostly Rhino for the form modelling and to make the drawings and Grasshopper for the parametric ribs/and surface panels,” Bieg stated. 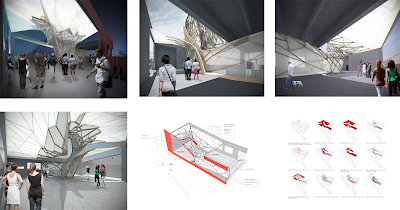