selecting the curve and calling up the command, one may have noticed the little point showing up glueing to the cplane. after clicking into the viewport the command prompt asks to choose a 2nd distance point. after some time thinking what this actually does it seemed kind of clear but i am still not sure if thats just a manual tolerance setting or what else this might be for.

the documentation regarding this issue reveals nothing whatsoever. has anybody got a further explanation for it? @brian this seems undocumented can you have a look?

Hmm, doesn’t happen here in Win Rhino, never seen that, must be a Mac Rhino phenomenon. Where does the point show up, always at the same place?

it indeed seems to be a phenomenon…

the point appears at the cursor and moves along with it. i noticed it after trying to figure out why it deactivates the prompt input ability using shift cursor to mark the numbers. then i saw this point and though i will try to click it and then a line appears waiting for a 2nd click. i thought you had a mac at home?

i noticed it after trying to figure out why it deactivates the prompt input ability using shift cursor to mark the numbers.

I don’t get that here. I do see the point at the mouse cursor (it’s a cross here), but after launching the command, I simply type a value for the tolerance (active by default like in Windows, it gets entered automatically in the appropriate box), then hit Enter and the command executes.

I don’t get that here. I do see the point at the mouse cursor (it’s a cross here)

are you still talking about windows?

i meant that the deactivation of the prompt is only for the shift cursor, in case you never use it: shift right marks a letter, shift alt right marks a word, shift down marks a line. entering the values still works, but the prompt seems to need the mouse cursor on top of it to enable the shift cursor functions, thats the same with all other commands which need user input with the mouse.

I have no idea what a “Shift cursor” is, have never used it. I tested FitCrv on both Mac and Windows with standard settings and they both work the same as far as I can tell.

so you say that i have an extra function which does not work elsewhere? to be sure: on mac select a curve enter FitCrv click into the viewport with that little cross and the dot inside then pull the mouse, a line comes up and you can click a second time to complete the command. that does not appear in your version?

here it asks for a second distance point. 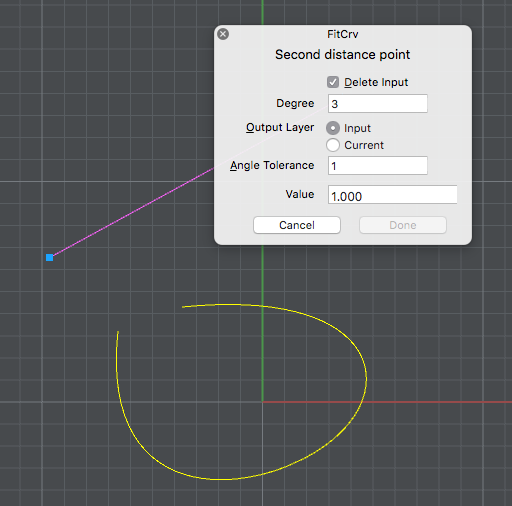 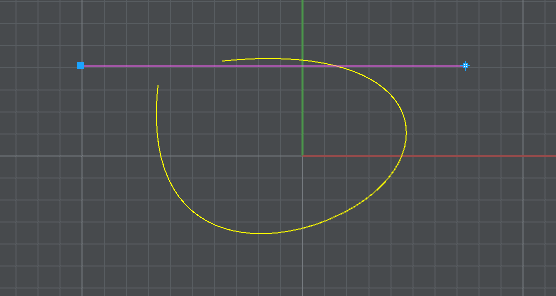 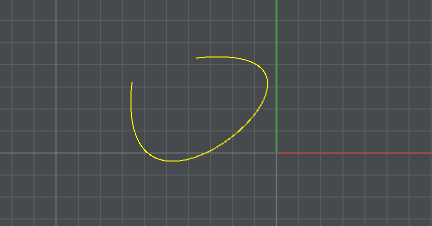 Don’t click in the viewport. Just type in a tolerance value or select one of the other options. If you click in the viewport, Rhino interprets that as you wanting to set the tolerance by clicking two points, so it waits for the second one. This is true for most Rhino commands that will accept a distance, you can usually do it either by entering a value or by clicking two points.

If you click in the viewport, Rhino interprets that as you wanting to set the tolerance by clicking two points,

thanks, we finally got there… the purpose seems logic, still i cant find any documentation for it to confirm this “theory”

or is this just one of those undocumented functions which one should know intuitively… which might be, spending enough time fondling around with it…

oh and @Helvetosaur another question can you confirm if this shift cursor functions get activated or deactivated in windows using any of such user input commands?

Dunno, this particular function has been around since Rhino 1.0. There are commands where clicking two points to determine a distance/direction makes sense, and others not all that much…

the documentation regarding this issue reveals nothing whatsoever.

It seems pretty clear in the help file:

ok, i try to explain, just try it out here in the reply field that works in any text input, online offline word internet whereever usually also in rhino but not in such commands.

yup you are right, my bad its indeed there… i must admit i searched for the keyword distance point and only skimmed quickly over the text and could not find it. thanks

This has to be a Mac thing, I guess… --Mitch

it seems to be a bit different on windows, below the listing if you are interested to work like a keyboard Ninja.

source to the page i got the information from.

OK, but how does this really apply to entering values into the command line? --Mitch

sometimes i want to change the whole value from something like 0.001 to 1.5 or whatever, while already entering somehing. marking the whole value and quickly retyping it is faster than to grab the mouse. even simple cursor buttons dont work, the field gets deactivated when not on top of it with the mouse. only blindly entering a value works.