I’m trying to unroll an object imported from 3ds max. The problem is that the commands have no effect on this object, not just the unroll. I’ve tried it in different extensions: .OBJ, .FBX … and I can only move it, scale it and rotate it.

If I create an object in Rhino, I can apply the unroll and other commands but in imported objects (even if it’s something as simple as a box) they do not work. If I select the object and apply the command nothing happens, and if I execute a command with nothing selected then it does not let me select the object in which I want it to be applied if it is an imported one.

I have searched everywhere and I can not find a solution to this problem … I am new to the program and I would greatly appreciate any help.

I forgot to say that the object isn’t locked

If you imported a .3ds, the object is a mesh.

Most Rhino surface commands (such as UnrollSrf) do not work on meshes, unfortunately. Under the Mesh menu, you will find a list of mesh-specific commands.

That was very helpful. 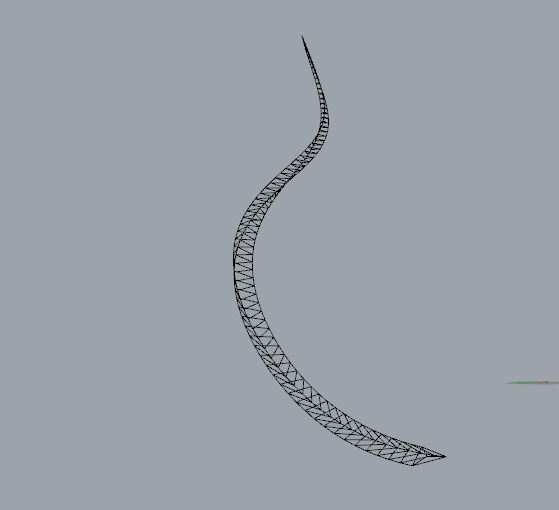 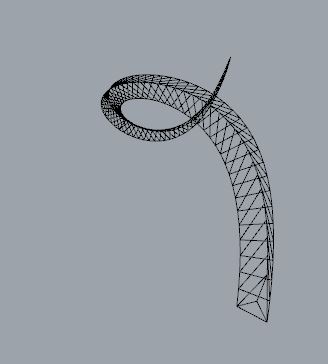 So is there any option to make some modification with the same effect as the unrollsrf? I need to unfold the surface and make it flat. I have tried the squish and what it does is crush all the morphology and makes it flat but without separating and ordering the polygons. I leave a photo of the object I want to modify.
androssolano (Androssolano) February 1, 2018, 2:41pm #6

Damn, I’ve messed up the whole text. As I said before, is there any option to get an effect similar to the unrollsrf in a mesh or is there an option to convert a mesh to an object that can be modified by those commands?

when squishing try those settings, its a mac screenshot yours will look similar 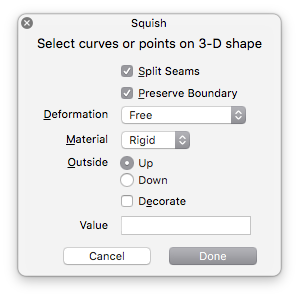 here i squished the highlighted mesh twice, once with welded edges and once i used UnweldEdge to define an area where the mesh is allowed to split. 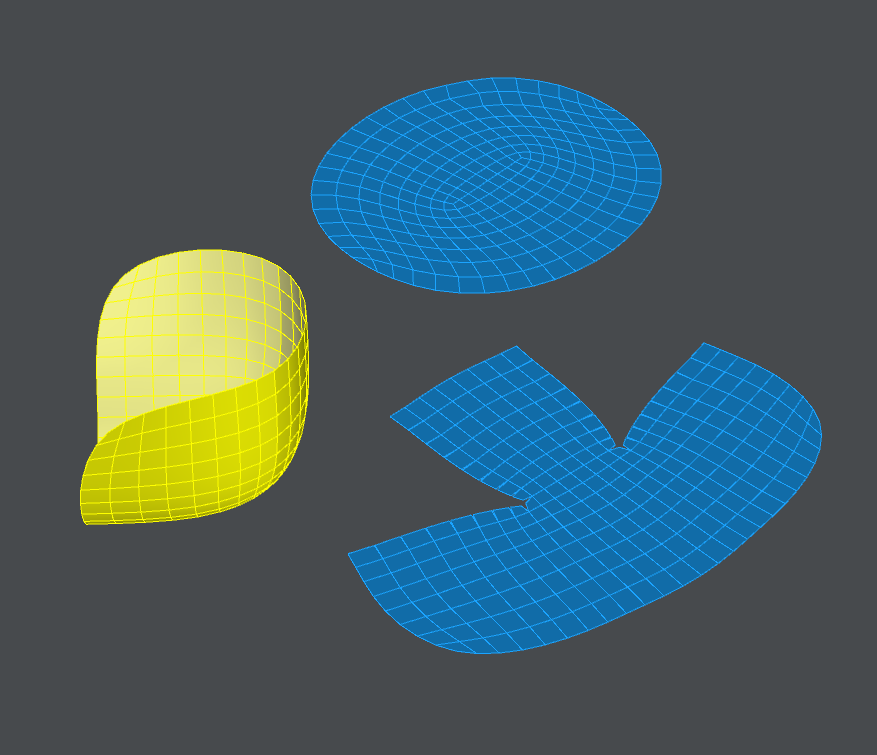 if you cant get it going, dont be shy to post a file, just drag and drop it into here.

ps: by the way your objects looks simple enough that you could rebuild them into nurbs with 3-4 clicks

ps: by the way your objects looks simple enough that you could rebuild them into nurbs with 3-4 clicks

Yes. Maybe not 3-4 clicks, but it’s pretty easy to make 3 smooth rails (that connect the points of the triangles) and then do 3 separate 2 rail sweeps… The surfaces should unroll OK, given that they are straight in one direction.

i would simply loft the rebuilt edges. of course there are a few enter or space in between, but that was supposed to outline how easy it is, tüpfleschießa we say in Vorarlberg

Wow guys, really, thank you very much for your speed in answering.

First of all I used the squish with the values that you told me @Richardz but it seems that the whole object has been unfolded (the 3 sides) in the same place and also part of the topology has been broken. (I attach a photo)

The other option that you say guys is something like draw a “new edges” above the object? I’m sorry if I do not understand you well. I am really new in this type of 3d technical programs (less than 3 days). 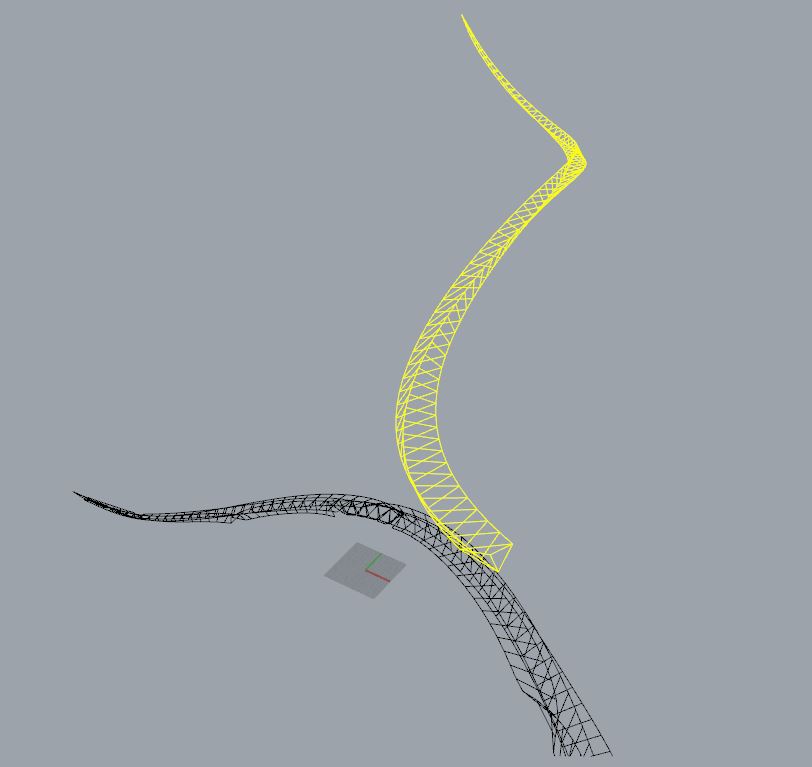 hi Andros, it would be best for everybody to explain what you actually want to achieve by importing it into rhino. or at least post your file. if you want to use rhino to work further on it then i would´ve started right from the start there since this is easy with a curve and a triangular profile to sweep.

like here, the thick curve is the rail and the triangle is the profile using sweep1 this is done in a minute. 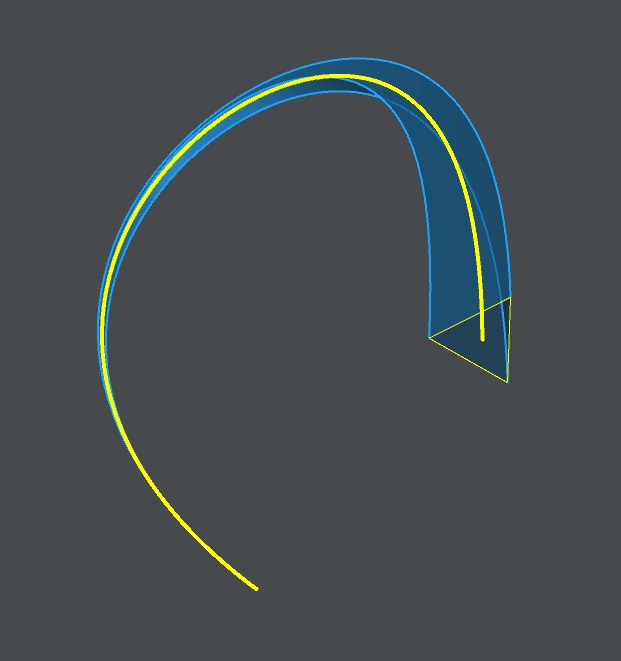 now if out of any reason you still want to export this, i have researched a bit, if you have created this in max as nurbs, then you might be able to export your model as IGES file name ending with igs which rhino can read. then you would have it easier unrolling it. if you have created a mesh, then you can either try to fiddle till it squishes properly, or you rebuild it as we suggested which will be 2 minutes work even if you are unexperienced.

the steps for rebuilding would be, type DupMeshEdge then click on the edges till you have 3 polylines like below 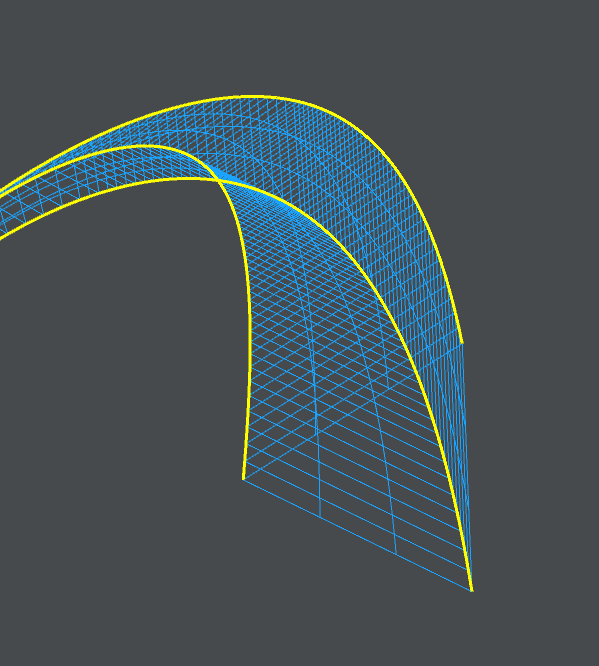 if you are lucky and the mesh is ok then it will create one edge at once per side, if not you may have to join the parts together. now if you have those 3 polylines select all of them and use RebuildCrvNonUniform with the settings below you can add a 0 after the comma just experiment a bit and you will get nurbs curves instead of polylines. 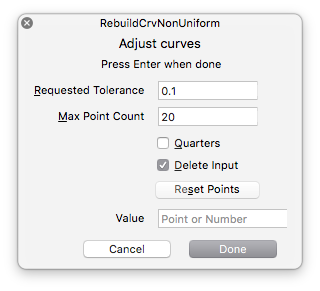 then simply select 2 of those curves for each side and use loft and done.

Thank you very much @RichardZ ,

Right now I’m going to try all that you’ve told me although I still have no idea about the program. Really, thanks for explaining clearly to a newbie. I will also upload the file in IGES and 3dm. I tried to import it into Rhino in IGES and it gives me an error but if you import it in 3dm you will see clearly the object in the Rhino space.

Let’s see if I can achieve what you have told me using those tools since what I want is to separate the piece on the 4 sides (3 and the base) to send it to a workshop and cut me those proportions in sheets of metal.