It’s been a while since I’ve used Windows Rhino but seem to remember being able to add objects to the model by dragging and dropping from the file explorer (e.g. dragging in a .jpg image automatically runs the pictureframe command, a .dwg runs import etc.).

Are there plans to include this functionality in mac rhino?

I am working on the drag&drop code for the Mac v6 version.

Dropping materials (.rmtl), environments (.renv) and image files onto the viewport works already here on my dev machine - still working out some kinks and cleaning up the code.

Once I’m confident this works well I’ll hook up also actions like importing third-party files and so on.

I don’t know when I am ready to merge my code with the master branch though, but when it is in you’ll probably read about it.

Drag&Drop of image files onto Rhino partially works now. Due to a slight error the latest WIP will do only Picture, even if you select wallpaper or anything else. But dropping an image will now trigger as the Picture command.

I already fixed that, but it’ll be in the next WIP instead.

More fun I guess is that you can now also drop 3dm files, dwg files, etc. on your Rhino (viewport).

This is absolutely killer!

Will it also work with PDF files? Sometimes you get pdf technical drawings and it would be great if you can just drag and drop it into your drawing and it vectorizes it. I know it already works when you import it.

Btw: I’ve tested Rhino 6 mac WIP a bit and it seems this will be an absolutely gorgeous version. Not one step forward but two. Besides that it looks gorgeous in Mojave Dark Mode.

Thank you McNeel for all the years of work you put into the mac version of Rhino to give us this great tool to design and draw!

Will it also work with PDF files?

It already does. If you have the latest WIP you can just drop a PDF on a viewport

Absolutely wonderful. Thanks a lot Nathan!

hi @nathanletwory and @dan come here and get a hug for this. i have been waiting to see this happen for a long time and have just found out.

some thoughts:
would it be possible to build in a checkbox which remembers my choice? dragging and dropping materials from the finder onto objects works without bleep box. i would like the same for picture frames. maybe having it then set it in the preferences if needed and/or something like pressing alt additionally for the need of the bleep to occur again.

Not sure I get what the bleep here means…

“bleep” box = the pop up window when dragging and dropping something onto the viewport. 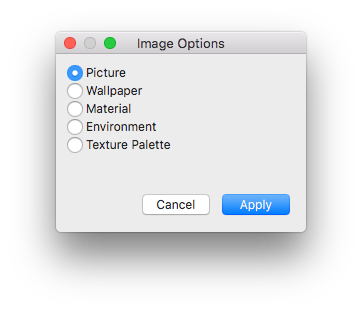 @dan @nathanletwory its not urgent for me because i only get to play on the wip once in a while. but i am sure i would not want to answer that pop up each time i drag an image on the viewport. any kind of yes, no, maybe would be interesting? yes, no, maybe?

Since it is part of the RDK ETO UI it could be taught to understand “don’t show me again” that is supported for dialogs.

I’ll let @dan, @pascal and others figure out if it actually should be done or not.

At this very moment I’d probably want the dialog to still pop up. Not just because I’m typing on code as well, but I just don’t constantly do the same thing - then I import, then insert, then open, many of those several times a day. I’d hate to have run some command to get the dialog back (and currently that’d probably show all dialogs I had said “don’t show again” to once used again).

Yeah, I’m with Nathan - in this case, I’d be reluctant to make the dialog go away, it would remove very useful choices and it would be a nuisance to have to remember to get them back when you do want them.

well in other cases for some that will be very bothersome, dragging in pictures frames very often not doing any of the other options ever like me for example and having to click it each time.

sorry but at the least an option to hide it would be great for those who would climb mountains in rage.