Differences between a extrusion object, solid and closed polysurface?

Hi, I am following this tutorial by Rhino (https://vimeo.com/50544164?lamp_win) - Designing an adjustable lamp, and around the 25 minute mark, the instructor exploded the surface of the cylinder (which he call an extrusion object) and join to create poly surface. What is the difference between an extrusion object, a solid and a polysurface? How does one tell the difference and when to use each type?

I think these three links will help you:

If an extrusion is converted to a surface or polysurface, the resulting shape is exactly the same.

The reason to use extrusions is if your model has many objects which can be represented as extrusions and the resulting reduction in required storage is important to you. The UseExtrusions command allows selection of extrusions to be used where possible or to always use surfaces/polysurfaces.

From https://wiki.mcneel.com/rhino/rhinov5status_extrusions which @Rodri linked to above.

Customers were creating architectural models with tens of thousands of objects that were simple extrusions. When traditional polysurfaces were used to represent the objects, the models were sluggish and used lots of memory resources. When these models use the lightweight extrusions, the models were responsive and there was plenty of memory available.

So why does Rhino mark closed solid polysurfaces with a cross and closed extrusions not?

Where, when?
How to ask effective questions

Well, now I see that all the surfaces of an extruded surface are marked with a cross.
I must have done something wrong. Thanks for your interest to help me.

Hi @amsarse, I guess the cross are the surfaces isocurves. Extrusions don’t draw any isocurves 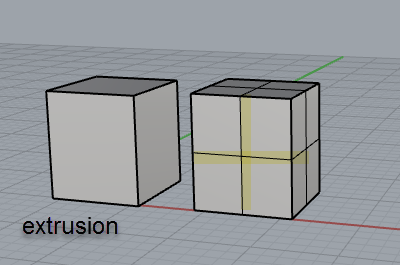 It can be changed in Options here: 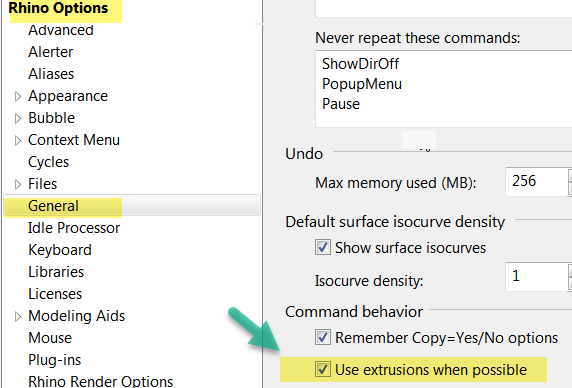 You exactly hit the point. Thank you very much!

Hi - no, Extrusion objects don’t.
I understand how it might lead to confusion, but the ExtrudeSrf command always creates polysurface type of objects, not extrusions.
-wim

You are right. When I try to highlight an extruded surface it is identified as a polysurface. But why Rhino does not use an extrusion when the option “Use extrusions when possible” is checked in “Command behaviour” in Rhino Options > General ? I understand that it takes less memory for Rhino to record one face and one line of extrusion instead of six surfaces (if say, a quadrangle is the base). Even if I additionally use the command “UseExtrusions”, the effect of an extrusion will only be a polysurface. This is not in according with what the help file linked here by Fred_C says.

The theory is OK but it does not work according to the help file. Vide my answer to Wim’s message. Happy New Year

This is not in according with what the help file linked here by Fred_C says.

Thanks, I see that. I am assuming that the help file is wrong here and have issued RH-56399 so that it will be checked.
-wim