What would be the method to convert brep faces to meshes?
(I know that I could do Mesh.CreateFromBrep(brep, MeshingParameters.Default)[0]; but I need to convert individual trimmed brep faces )

When I try to convert each brep face I got untrimmed brep mesh conversion:

It seems to work with that :

Hello everyone, I’m developing a new plugin for Rhino, using Rhinocommon SDK and Visual Studio .NET C#. I’m trying to convert a Trimmed Brep Face to our internal library NURBS format, but I get a surface that is different from the original, since it has several unwanted extensions. When using the Rhinocommon function “Brep.CopyTrimCurves(face, surface, tolerance)“ I get the same wrong result. If I export the surface as IGES file and reimport, then, on the new imported surface, everything wor… Maybe you have an idea how to match meshed breps
so that edge vertices would be the same for adjacent brep faces? 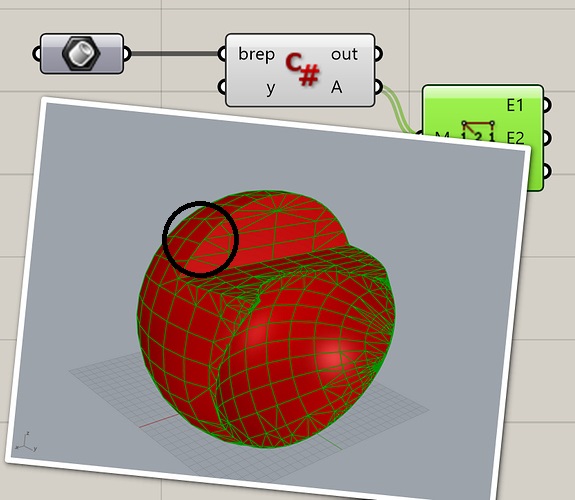 I don’t find this option in meshing parameter.
I understood that Mesh2 has this possibility to have mesh with same vertex on seam.
I don’t know if it is in Rhinocommon.

Mesh2 is a new type of mesher in Rhino WIP 2017-Sep-19. It can be used to mesh single objects just like the standard Rhino mesher. It is also capable of meshing multiple objects into compatible meshes without having to join the objects themselves. Mesh2 supports presets for meshing parameters. It has groups feature to select layers whose objects need compatible meshes. In this image 4 surface objects are meshed together. Preview shows naked edges in magenta. [image] Detailed instructions ho…

Hi Laurent, Mesh2 is still a WIP plug-in. It has no API.