Brep.JoinEdges command in Rhino to grasshopper

I need to make this happen in my grasshopper script.

I’m currently using this link to help me find out how to do it:

But I just can’t seem to get it to work AT ALL.

This command works perfectly if I bake my surfaces. Having this in grasshopper would be perfect. 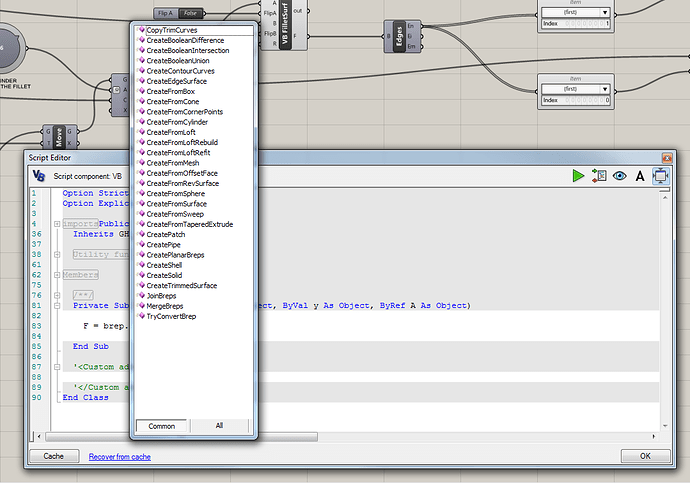 I can’t find JoinEdges anywhere, and typing it out manually just gives me errors (I can’t manually change the Private Sub inputs)

And is your input variable called brep? What is F?

Based on what I can see from your code, I can deduce that brep is not a variable of type Rhino.Geometry.Brep in your code, but instead Visual Basic is assuming that you are referring to the type itself, despite using incorrect casing. JoinEdges is not a Shared/static method on the Brep type, it is instead an instance method. This means you must have an actual variable which has the assigned type of Brep.

If you have an input to your script component called F, you must specify the type-hint from the input context menu, and then you should be able to use F.JoinEdges().

Could also be that it is only available in Rhino6 Beta. What Rhino version are you using? There are many new methods I notice being added to rhinocommon that are for the new version. I am on Rhino 5 SR14 and can confirm that method isn’t available. Just this one is: http://developer.rhino3d.com/api/RhinoCommonWin/html/M_Rhino_Geometry_Brep_JoinNakedEdges.htm