Behind the Snow Queen at Victoria's Secret 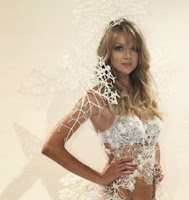 Victoria’s Secret has presented its annual catwalk fashion show since 1995, each year more of an extravaganza. This year there were 18 different pairs of angel wings, part of a recurring theme, but the buzz was the Snow Queen’s 3D printed wings.

Designed by architect Bradley Rothenberg, the wings were 3D printed in the Shapeways factory in New York City. To precisely fit model Lindsay Ellingson, a 3D scan was made of her. Shapeways 3D printed the fractal snowflakes and organized the snowflakes into a garment. Adjustments were made where the snowflakes shifted from small textile-like to become larger structural snowflakes. Rhino and Maya were mainly used for this part of the project. Then for the appropriate sparkle and festivity, the snowflakes were festooned with millions of Swarovski crystals.

The fashion show will air on December 10th on CBS.