When multiple sets of trees with same branch count but with diffrent path mapping used as input, for instance in this case ‘concatenate’, I used to think path with larger number(if depth of path is same) or path with greater depth is used for resulting tree, but as I tested with above example, I am very frustrated that isn’t at all how the path works.

Can someone explain how resulting path is decided when tree with different path form engages?

Probably this topic is the most rescent one you might want to see?

Thank you Kim, but that isn’t the case in this one. I know the fact that path itself has no role in matching data, but the sequential order of path is what matters. “Nth branch of a tree will match up with Nth branch of an another tree” is what I understand. Which I am very certain.

I have no idea about the mechanism what you mentioned, anyway you can choose the output tree path by checking Principal option through I/O modifier… 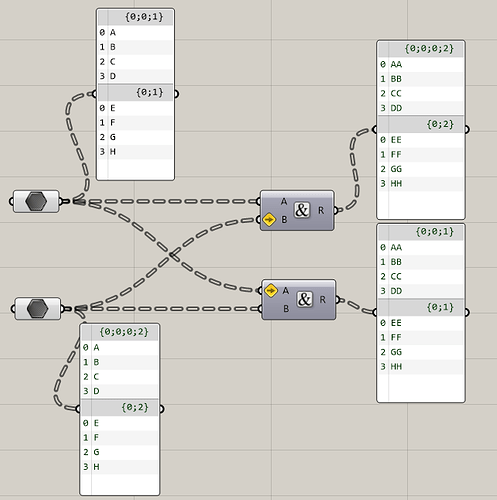 which path is used without principal designation is my question. I have been onto this matter this whole day but still cannot figure it out.