Sweep or Pipe? Or?

The attached file shows a set of curves to make a transition-piece for a staircase handrail. The green rectangles and circles outline an obround handrail section. I’m trying to sweep or otherwise construct this handrail such that it maintains constant section along its entire length. I’m not bothered whether that happens to be the rectangle or the circles - I can create the obround once I’ve managed to get Rhino to give me a constant section. And that appears to be something of a challenge in this case.

The magenta curve (1) is pulled off the top of the balustrade. The handrail has to sit on top of that, so it makes sense to use it as a rail to guide the form of the handrail. But no matter how I try - Sweep1, Sweep2, Pipe, Ribbon, Extrude along curve - I can’t get a method that maintains either constant height (for the rectangle) or constant radius (for the circle). I drew lines from the ends of (1) to the centres of the circles, used Sweep 2 using the two short (green) radial lines as rails and (1) as the section curve, then duplicated the edge of the resulting surface to give me a centreline for Pipe. I matched the curve ends for tangency to the two green lines coming form the circle centres before using Pipe, which gets close but offers no control over the location of the surface seam, and in any case it doesn’t give me a tube with ends that are perpendicular to the pipe curve for some reason, despite the fact that I used CircleAroundCrv to make the green circles, picking the end points of the magenta curve (2) as centres. (3) & (4) are isocurves pulled from a Sweep1 using the circles as beginning and end sections. Curve deviation shows that they aren’t parallel.

Am I missing something obvious here? The curves in the file are simple, clean and perpendicular or tangential where they need to be. Intersecting the green circles with the green rectangles gives me clean, singular contact points. Everything seems straight and true. Why can’t I get a constant section shape? This should be easy. I’m sounding like a newbie… 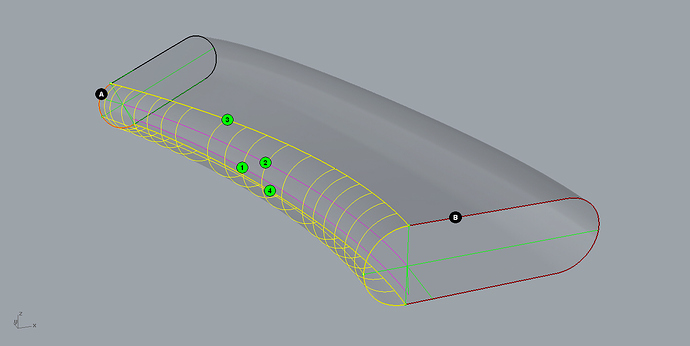 Hi Rolf - yes. But check the isocurves. Are they giving a radius of 25.4 at any chosen station?

I’ve come back this with fresher eyes this morning and got a clean, consistent result using Sweep1 with the align to surface option. As I mentioned, curve (1) is the top edge of the balustrade surface, so I used that as the rail and the surface to align to. Unfortunately, I didn’t include the surface in the file I posted. The circles at either end were the profiles, with the ‘natural’ option used for the seam points. This gave me consistent isocurve radii of 25.4mm all the way along the section and kept the tube seam where I wanted it.

isocurves. Are they giving a radius of 25.4 at any chosen station

Hm… no. But then I attempted the following :

And voila! It still still didn’t end up good enough… 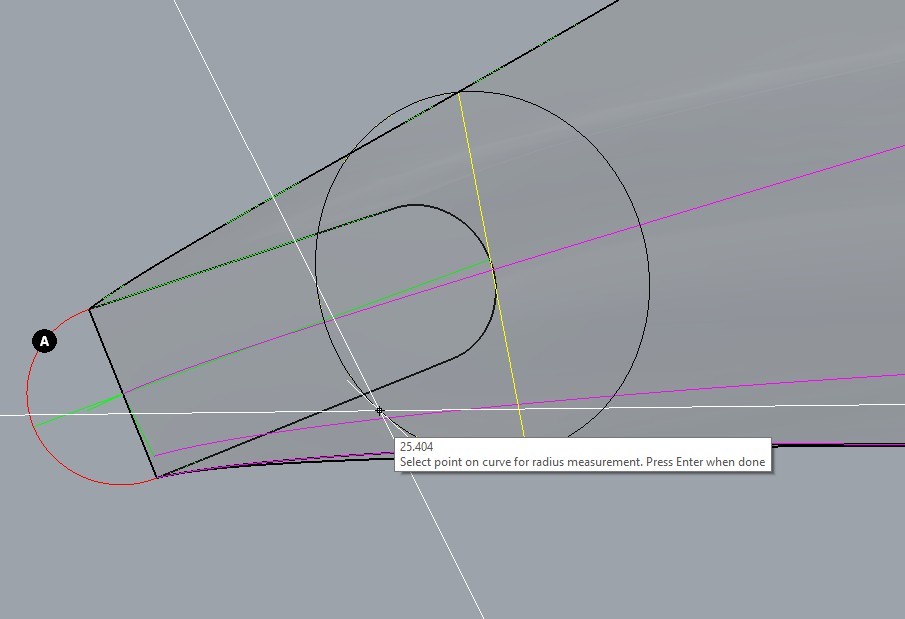 The distance between the rails still becomes narrower between the cross sections. That seems to me to be a “quality bug” in Rhino.

Quite. You’ve used a slightly different approach to the way I was doing it, but have suffered the same problem. To me, if the beginning and end profiles are the same and oriented at the same angle relative to the rail curve, then the section at any point of the resulting sweep should be the same as those profiles. I was frustrated to find that’s not the case.

Pipe gives constant (correct) section, but the shape and more importantly location of the surface seam isn’t very nice and can’t be controlled, unless I’ve missed some part of the user interface.

For what it’s worth, attached is what I came up with this morning, using the method outlined in my previous post, which looks to be clean enough.

For what it’s worth, attached is what I came up with this morning, using the method outlined in my previous post,

In the enclosed file I made another surface using Fin command. I then used the edge of the fin surface as the rail for a sweep1 (align with surface).
Railing.3dm (270.3 KB)

The 2 surfaces are only different by a few thousands of an inch - so it may not be worth the trouble.

A bit of a workaround, but it worked smoothly. See also attached notes in file.

I matched the curve ends for tangency to the two green lines coming form the circle centres before using Pipe, which gets close but offers no control over the location of the surface seam,

if you use Circle -> Around Curve to place a circle at the end of the curve then use sweep1 instead of Pipe, you can control the seam location.

you can control the seam location

FWIW the command SrfSeam will let you adjust seams of surfaces after creation:
http://docs.mcneel.com/rhino/5/help/en-us/index.htm#commands/srfseam.htm

Following on on a similar theme, when I Sweep1 using the Align with Surface option why does the result kick outboard relative to the guide surface at the lower end? Roadlike Top gives a near-identical output in this case too. The section curves are set up perpendicular to the ends of the rail curve.
Sweep1 Align with Surface.3dm (204.8 KB)

It looks to me that sweep1 (align with surface) is working correctly. If you create a line that is perpendicular to the edge and tangent to the surface you get a surface that follows the same path. The swept surface stays tangent to the surface and perpendicular to the edge. You can verify that with the matchsrf command. (see file)
Sweep1X.3dm (233.8 KB)