I am using this method to convert an extrusion into a brep as I am interested in accessing individual faces.

In the image below, on the left-hand side you have extrusion and on the right-hand side the same extrusion is converted into closed polysurface in rhino through convertExtrusion command.

I am using rhino3dm python. When I access the faces of the closed polysurface I get six faces which I expect. However, when I try accessing the faces of a brep created from extrusion using the ToBrep method then I am only able to access two faces. Why does this happen? What am I missing here?

On an additional note, when I check the length of faces in the brep created from extrusion in rhino3dm through ToBrep method, it shows as 6, which is right.

Following is how I am doing this to be explicit. 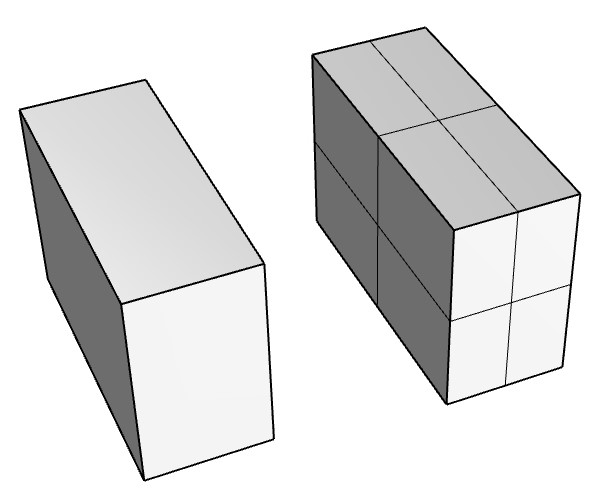 This code works with this file using Python 3.7:

@Dale, the problem is accessing all the faces. For instance, if you do

You get only two prints instead of four. Same if you try to access with a running index idx from 0-5 over brep.Faces[idx].

Output of your script modified to

Thanks a lot @nathanletwory for demonstrating the problem.

@dale, as you can see in the output, the length of faces is 6 which is right. But only 2 faces are being printed. That is the problem.

Thanks for the new release today.

I tried the new release and observed the following behavior. The rhino file has a box test.3dm (40.9 KB) which comes as an Extrusion object in rhino3dm.

Why do I get None when I try to create a mesh from a brepFace that comes from a brep created from an extrusion? You might ask why am I doing this when I can directly convert the Extrusion object in a mesh. The reason is I want to access vertices for each face and that is only exposed for a mesh object.

Rhino3dm will not create meshes from Breps. This is a limitation of openNURBS, which Rhino3dm is based on. So its always best to save 3dm files that have meshes already cached on Breps. You can easily this by just shading a viewport before saving the 3dm file.

Thanks for your response @dale.

I made sure that the rhino file was saved in the shaded mode before I ran the script. I have been aware of that limitation for a long time now. Having said that, do you still think that those None values are valid?

is going to create a new Brep, and that Brep is not going to have any cached meshes.

Now that explains it. Thank you very much @dale!