Thanks you, this code create xml file with all points needed

I use Pancake to export the output as svg file than import it, i don’t know how to do that with python;
and the result , small qrcode city

Also it includes a template for making your own factory - it looks as though it would be quite easy to implement a Rhino template to draw squares in Rhino representing your QR code !

The code is here

Thank you very much; i make a little change

Hi @seghierkhaled .
I would like to use the qrcode module in GHPython and RhinoPython, but when I try to import qrcode, I get an import error. how can I use qrcode in GHpython?

Read the topic carefuly, the solution already posted by @Dancergraham

Sorry, I had to read it properly again. However, I couldn’t figure out why the first line of the import shows invalid syntax.
Where is the qrcode module installed? I’m sorry that this is a fundamental question.
Thanks for your help!

Follow these steps to set python27 as interepter and to add it in rhino folders than you can install qrcode module.

Hello Follow these steps: Add Python27\Lib\site-packages folder to Module Search paths [py] Set Python27 as interepter to install python-bidi or you can install it via Pycharm. Open cmd and type pip install python-bidi (or install it via Pycharm) Copy the file " arabic_reshaper.py " to “Python27\Lib\site-packages”. Restart Rhino (if it is already opened). [image] You can copy the result text and use it in Rhino arabic_reshaper.py (12.6 KB) arabic.gh (9.0 KB)

You should put the qrcode module in your scripts folder. For Rhino 7 on Windows this should be %HOMEPATH%\AppData\Roaming\McNeel\Rhinoceros\7.0\scripts

You should have a folder called qrcode in there containing files like this:

and this file : rhino_image.py (1.5 KB) in the image directory

Hmm, I’m probably missing something essential but I have those folders and files seamingly in the right location 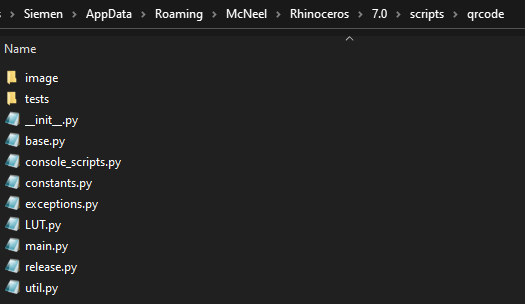 But cannot get it to work either… 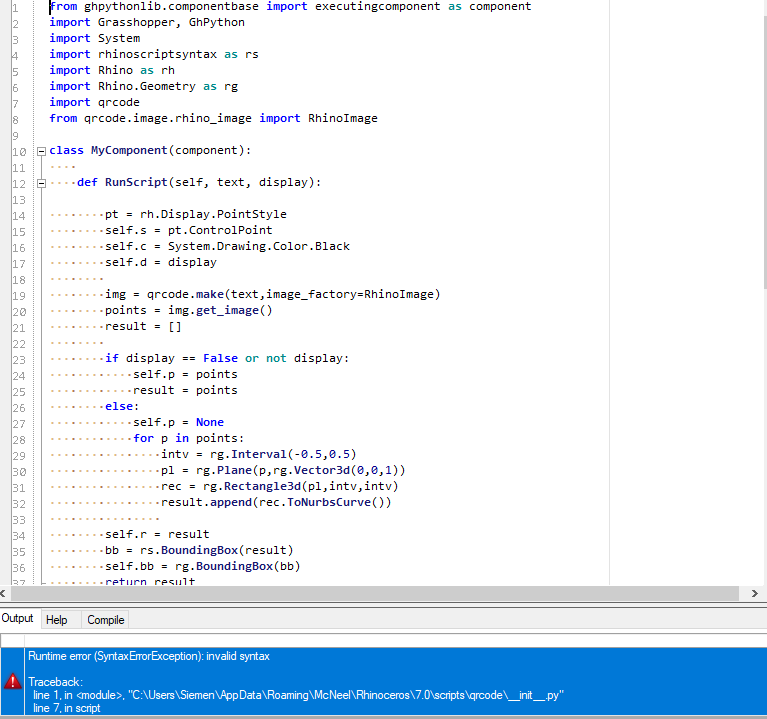 Did you download version 7 from Pypi ? It looks like they have gone Python 3 only - you may need to download and unpack the tar package from here qrcode · PyPI

That did something but it now seems like I’m missing a module named “six”. Any idea what that could be? Thanks a lot for the help. 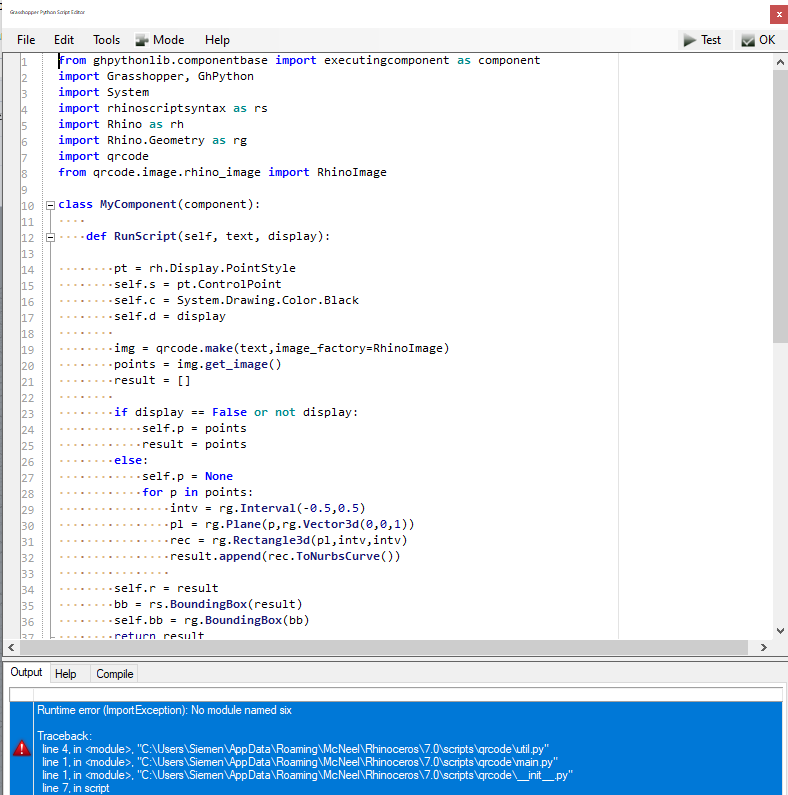 If I remember correctly, Six should be a Python module that attempts to render scripts written in Python 2.7 and 3.x+ better compatible. The entire module should be contained within a single Python file. As long as you copy it to a directory that Rhino loads by default or even to your own project/module, you should be able to import from it. You can get it on GitHub.

I have incompatible libraries - I am stuck on 3.8 for the new day job, but at least I have f-strings and type annotations. Looking forward to structural pattern matching in 3.10 if I ever get there !!!

That’s it. Got it working now. Thanks a lot guys!