Linked block does not display

I have a model with a linked block (2 instances), all seemed to go well when I inserted the blocks. I have not used that part of the model for some time, but now when I turn on the appropriate levels the blocks do not display. The blocks are listed in the block manager. The blocks can not be selected by cursor pick either. If I explode all blocks the geometry becomes visible.
These are the properties of the block 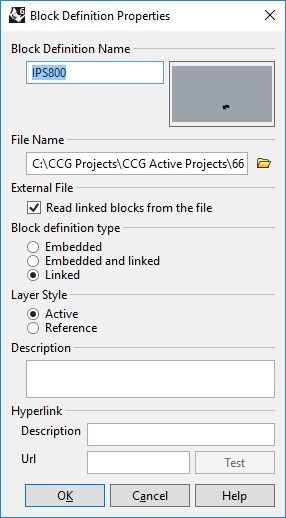 Any hidden layers in your file?

I have found the block it was on an undisplayed layer. However the blocks were defined on another layer, when I tried to delete the layer it would not let me saying I had to delete the blocks first.
Still trying to come to grips with linked blocks and layers.
Thanks for your help.

Yes, you have the block definition layer and then the layers of the objects inside of the block. These can but don’t need to be the same.
I have made some scripts to organize blocks that might help you out:

After following this discussion, I’ve made a script that you can use to create a block definition layer structure when creating a block. And another to organize blocks onto layers with their block name @pascal @Helvetosaur what do you think? organizedBlock.py (1.6 KB)