My guess is that the others manage to leverage the mesh edges and silhouettes computed by the algorithm in a smart way, projecting them instantly on a virtual plane, and converting them in into simple entities when relevant (circles in particular).

My understanding is that the parametric modellers do not work this way. They cheat by using the feature sketches for the drafting results, hence why they are far more developed than Rhino can produce from a “dumb” model with no sketch based feautures. I might be wrong though.

They cheat by using the feature sketches for the drafting results

This is obviously wrong, the simple proof being that many people export “dumb” geometry from Rhino to these tools, expressly for them to make projected views.

By chance, all the workshop drawings for our steelwork are done by our sub-contractor this way : we send them STEP models (which get imported as parts /assemblies since we use nested blocks), and they do all the drafting with Inventor or similar.

reminds me of the old Autocad command ViewBase hardly anyone knows about. Great for quick hidden line perspectives and hatched sections.

This is obviously wrong, the simple proof being that many people export “dumb” geometry from Rhino to these tools, expressly for them to make projected views.

And, of course, there’s this lovely thread:

Technical drawings - Is LAYOUT the best way? Rhino for Windows

Hi guys, I’ve been working on some construction projects (Metal, Wood) and still have trouble creating a descent technical drawing out of Rhino fast enough. SO, I’ve been looking at other softwares 'approaches to this problem. Currently, Rhino - sort of - uses the “AutoCAD approach”, by creating layouts and referencing certain parts in the 3D Model Area. In order to create a descent drawing (with arrows, and text and welding signs), this requires me to heavily use the “MAKE2D” command. Then …

How many of the requests made in that one have been addressed?

I think the message, that Rhino currently is not fullfilling the needs of people who would like to do 2D Plans has come accross.

I personally believe, that the “AutoCAD” approach with layouts and mixed Files with 2D and 3D Data is not a good and clean solution. Most of the software packages got rid of this approach by now.

I believe, since a 2D Drawing in is derived from 3D, the approach Inventor or Solidworks with a clear seperation between 3D Model and 2D drawing is a good thing - a .2dm File with an assosiation to a .3dm File would be something I’d like to see.

In an effort to get rid of 2D Plans completely in the workshop, it would be great to support the PMI capabilites of the STEP Format. 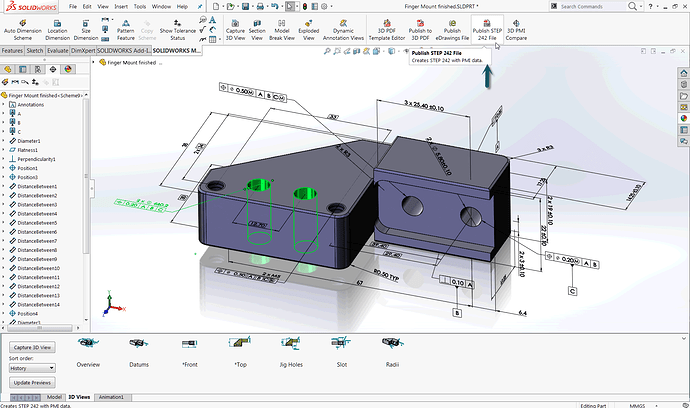 What is STEP 242? Why is it important? How is SOLIDWORKS supporting it?

but as was mentioned above, these programs still need extensive cleanup to go to a typical cnc machine.
and are extremely restrictive. In rhino/gh you can quickly generate 1000’s of accurate clean drawings that programmers love as well as the documentation. Really not even a contest.

Generally Dimensioning is hard to automate - possible but hard.

So what you are saying is correct, as long as the demands on the drawings are not “too” high, and the geometry is somewhat similar.

Once you come to the point where parts are very different from each other, and dont’ follow similar geometric rules, dimensioning thousands, is quite hard to do with GH.

I do not know every feature, but it is an example of storing the process to refresh the drawings. Saving which surfaces are hull, station/waterline position, names and layers etc for quicker updates.

STEP 242 standard looks very interesting. Thank you for that link

@DanielPiker Is there anything in there that Rhino can jump on? I’m thinking about your sketch constrainer, or whatever you want to call it, here. I think you might get a few user’s attention if you can send models to someone with Solidworks etc and they find that the model comes complete with inferred PMI.

I also like the idea of a .2dm format, especially if it could pop open in a floating viewport when prompted.

Oh, I’ll have to try that. But my experience of SW models of boats is that it doesn’t produce useable drawings. There’s too many “artistic” decisions to make. For example, a simple section of a boat model is useless, too much information is missed or included. Adding depth to the section doesn’t help. The drawing is a representation of the design to describe it to humans, not an exact detail of the 3D model. I suspect architecture drawings are similar. This is the crux of the problem we’re discussing, how to program a computer to streamline the decision making.

At the very large auto company I worked for the initial packaging of vehicles used to be done on 2D drawings which had standardized formats. For instance one standard side view drawing would include the occupant postions, the loctions steering column, pedals and gearshift, centerline profile of the hood,windshield and roof, door openings, etc. floor, tunnel and dash/instrument panel profiles, the nominal location of the panel never, never refered to as the “firewall”, etc. As packaging transitioned to using 3D geometry in CAD there were requests for drawings, generally for reviews. It took a while to learn that the drawings could not be created by simply sectioning a 3D model but had to be synthesised using combinations of profiles, sections and silhouettes from the 3D model. Eventually the 2D drawings were only used as initial sketches, and 3D models became the standard for reviews.

In the guitar making industry we use 3d almost exclusively to communicate with factory manufacturing teams-usually IGS. But 2d still plays a critical role in communicating tolerances and calling attention to critical areas. Also the guys that run the companies often can’t open a 3d file- they need to see a PDF or maybe if you’re lucky a DWG. I use Make2d for illustration but it is a nightmare when it comes to production drawings for anything but relatively simple geometry. Too many micro lines stacked on top of each other and missing information,etc., so I have to use sections, duplicate part edges and a fair amount of old school drawing to produce 2d that I can reference reliably. I’m excited to see game changing advances like Grasshopper and SubD but please don’t forget that we still need rock solid 2d drawings, preferably interactively tied to the 3d model.

I don’t like the idea of having separated files for 3d and 2d since it can be a nightmare with bigger projects with hundreds of files.

My two cents on how to solve it could the following.

I don’t like the idea of having separated files for 3d and 2d since it can be a nightmare with bigger projects with hundreds of files.

So separate files is a solution to some problem, it would be helpful to step back and consider what requirements are driving that suggestion. I’d suggest that they might include:

Community: Feel free to add to this, support, deny, debate.
@bobmcneel : Feel free to capture this and add it to all the requirements expressed about dimensions and hatches and everything else. It would be great to see a comprehensive set of user stories around the whole 2d arena evolving, being prioritised and informing future development.

I just want to say that it’s refreshing to see a discussion like this on the actual dev’s forum. I’ve recently had a less than delightful experience with another software dev’s forum where I tried to bring issues to light. Let’s just say that they weren’t as invested in the discussion, nor were willing to really talk about the issues like they are here at McNeel. Based on the attitudes I see here, I can only see Rhino3d getting better and better (the opposite being true about many other programs).

So now my actual reason for jumping into this conversation: I think that comparing Rhino3d directly to other programs isn’t appropriate. If you’re comparing Rhino3d to a software package who’s yearly fee is twice (or more!!) of the cost of Rhino’s perpetual license… of course the prior program should have more features/be more refined (this might not be the case). By all means fork out the money for solid works, it’s a great software program for the mechanical engineering industry.

I’m an advanced Revit user. Although I can get my drawings looking pretty close to the way I want them to, it’s a pain. Revit has no command line and you can only make/memorize so many keyboard shortcuts. The CUI is very hard to customize without serious API programming ability. Furthermore, Revit really tries hard to dictate the way things look. Title blocks for example. I can get them looking like I want (custom family followed by some manual manipulation). But said and done, it takes at least 2x longer to add my annotations in Revit compared to CAD. When I use layouts in AutoCAD I keep things relatively simple. An example being my title blocks in CAD: Most of the text in the title block (anything that is likely to change from sheet to sheet) is just text, and one only needs to double-click on it to change it. A project title would be part of the title block’s block definition. I’ve tried different things and this is quickest. An added bonus is that I’ve had more success training employees with this method as well. I like having the freedom to do that with CAD. With Revit, I need most of my title block’s information to be contained in labels. I don’t have the flexibility where I can simply ‘move or copy’ layouts. It takes much longer to edit a title block in Revit compared to my simple method in CAD that could have been done exactly the same way in 1998. And then when you run into a unique situation, such as having a sheet title name that doesn’t fit, or wanting to break a line of text, this is when Revit really takes a dump (as these take seconds to deal with in CAD). I also hate the lack of flexibility of leader styles in Revit, and how slow it is to add leaders. Revit’s annotation and 2D layout features aren’t terrible but at the same time aren’t great either.

The replies in this thread are making it way too complex imo. The eventual developer that gets time to work on this will be overwhelmed. I’d suggest that we all make 1 wish for v7. Once that’s fulfilled then let’s talk about Rhino v9

My vote goes to customizable per object hatch fills in clipping planes. If you agree, like this reply, otherwise make your own suggestion.

I see two areas of development…

There seem to be good moves being made on the annotation front. View generation though is very personal for anything beyond simpler mechanical parts. For example I would have no need for hatch fills on clipping planes and would prefer a native custom clipping object.

Maybe, embracing the idea of a separated file and a single wish, ExportMake2D where it would be processed and be able to update as a block or something, so I don’t have to re do all the 2D detailing every time something minor get changed on the 3d model.

This is actually what I started doing at work, I save as older rhino version so my solid can import it and then make the 2D drawing on solidworks.

Sadly that is not possible when I do my home projects.

Totally agree, some of the complexity in these suggestions is exactly why McNeel take the stance that plugins are fine. We really have to focus on the bread and butter integrations for any serious drafter in V7: