Is that really possible to draw 4d or 5d objects , or is there any plug-in that can lead us to this goal?

how to visualize higher dimension objects in grasshopper, i don’t mean tetrahedron or other geometries. As physicists knows visualizing higher dimensions objects is not possible for humankind, So what is the best way to close it ??

People use math software to do visualizations of 4D objects, but no I don’t imagine it’s practical to try to “model” one, the math for a simple 4D hypercube is crazy enough. A 3D model would be only a slice of a 4D object, which you’re trying to make through a 2D interface, so…in one way it’s impossible but in another any 3D model would be theoretically a slice of a 4D object, ha.

Imagine you live in the 2D world of Flatland–I presume you’re familiar with that short story?–and you’re trying to model a 3D sphere on your 1D screen where all you can see is a linear slice of it at once. And your brain isn’t even capable of visualizing 3D…

The environmental objects inside are 4d-modeled using math equations. The author talks about how to model the scene on YouTube.

Hi everybody, Here’s a side project of mine that I’ve fortunately completed today! For some time, mainly after watching some of the Marvel superhero movies and hearing about the “tesseract”, I looked it up and was disappointed that the movie tesseract has nothing to do with the geometrical concept, which is much more interesting. Disney portraits the tesseract as a simple, glowing blue cube with an animated fluid substance inside. In geometry, the tesseract or hypercube is the "four-dimension…

This old thread of mine potentially contains some interesting information. Especially look at @DanielPiker’s comments. His Kangaroo2 “add-on” also features a couple of components which allow you to do 4D transformations, which might be interesting. 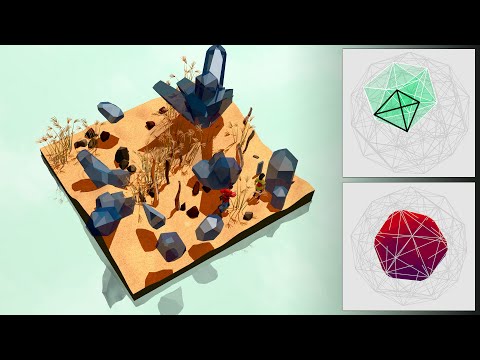 I’m not expert in this field by any means, but I always thought that a higher dimension is sort of an interpretation. We cannot truly experience a 4d space because we are 3d beings. In CAD, it means we use a 4th or even 5th coordinate. But what does it stand for? Rhino offers a Point4d. Nurbs can have weights, so the weight represents the 4th dimension of that polynomial representation. In fact, setting the weight of a control vertex is tweaking its impact on the computed curve, surface. In that regard it simulates a ‘mass’ in the 4th dimension, thus we speak about ‘weights’.