How to make random louvers opening!

I was experimenting on louvers but all what I get is continius one way opening.Is there way to make it random or let it opens but exponentially.facadetexture1Gur.gh (17.8 KB)

From your screenshot all think you need to do is: Right click on the A of the Rotate Component and click the Graft option from the list, this will break your list of numbers coming from the graph component into single branches, they should then match the tree structure of the other inputs. (In this case)

A quick way to check what happening is by looking at the wires.

I tried to graft but its not working as I wanted. or maybe I am doing something wrong?!?

Neat def… I think this does what you want…Rotate all the ruled surfaces at the end using a Random (Sets>Sequence) component. 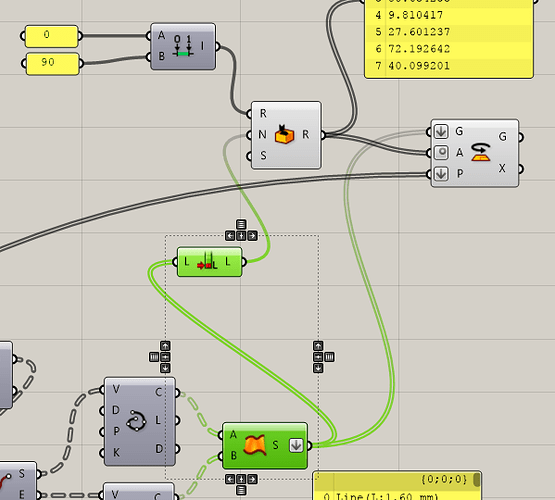 Yeah my Bad, Graft would have only have worked the way I said it the other inputs has just been one item per branch but after opening your code i see you did had multiple lines coming in per branch.

I did a little edit of what you had, hopefully it works as you want it too. I kept what i could of your code and logic and added in the gradient and an option to set how long the openings are.

PS. You will need to Input your Curves again as forgot to interalise the test ones i made.

that’s is more than I can imagine)) thank u ,its great!